By Aigerim Bulambayeva in Tourism on 9 November 2017

ASTANA – Founded as a small fishing village, Atyrau has developed into one of Kazakhstan’s biggest industrial cities and is now known as an oil capital of the country. 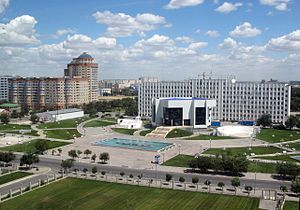 Atyrau was established on the shores of the Yaik River, renamed the Ural by Russian Empress Catherine the Great after the Pugachev Rebellion. The change liquidated any legacy of the uprising and memories of Stepan Razin, one of its leaders who captured the city in 1667-1668.

The city started to grow and expand significantly with the development of the oil industry and construction of the first refineries and oil equipment plant in the country. The fishing industry – the occupation that attracted people to the small city and gave it a boost – never lagged, however, as Atyrau is also home to Kazakhstan’s biggest fish cannery. The importance of fish and oil in locals’ life is symbolized in the city’s emblem – two sturgeons and an oil rig.

Atyrau is located in the European part of Kazakhstan. During Soviet days, there was a misconception that the Ural River separated Europe and Asia and the city was divided between the continents. While all geographic societies now agree the Ural Mountains, not the river, carve the combined continental landmass in two, a beautiful and rather sentimental tourist attraction – a border sign with a small gazebo – remains. 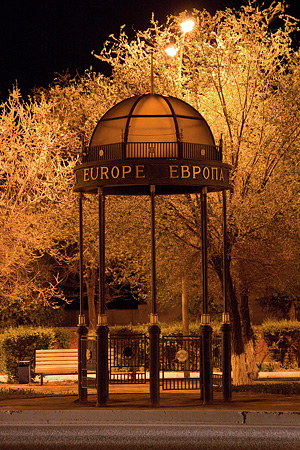 The pedestrian bridge, the longest of its kind across the Ural River, is another popular attraction. The bridge has a place in the Guinness Book of Records.

Tourists craving aesthetic pleasure are encouraged to visit Imangali Mosque on Satbayev Street. The main blue dome measures seven metres wide and 23 metres high. The mosque is decorated with several 26-metre tall symmetrical minarets and the building can accommodate 700 visitors at once. 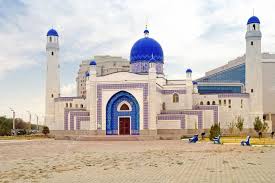 The Uspensky (Assumption) Cathedral, another important religious city landmark, was erected in the second half of the 19th century. The brick building has distinct gilded onion shaped domes. 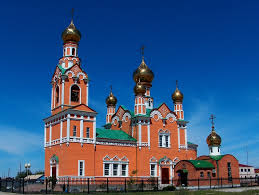 It is extremely important to plan one’s visit in advance, as Atyrau is located in the far western portion of the country and is a distance from Astana and Almaty. As a result, transportation costs are higher than to other cities. Atyrau may be accessed by ground or air. Railway tickets from the capital vary from 8,200 tenge (US$24.60) to 27,000 tenge (US$81.10), depending on the train type and length of time between booking and departure dates. Prices surge as the departure date approaches, a trend which also applies to airline tickets. Booking a seat a day before departure will cost 77,000 tenge (US$231.20), whereas one can save half the price by reserving at least a month in advance.

Atyrau Airport is international and has flights to Amsterdam, Baku, Istanbul, Moscow and Tbilisi.

The five-star Renaissance Hotel, on Satbayev Street in the heart of Atyrau, promises a luxurious experience likely to meet the expectations of any guest. The hotel offers an haute cuisine restaurant, spa and lounge bar.

Those reluctant to experiment in terms of accommodations may choose the Marriot Atyrau. The popular international chain, located in the centre of the city, is a five-minute walk from the main attractions.

For tourists on a budget, the city offers the Chagala Hotel, Grand Hotel, and Victoria Hotel. Airbnb and apartment rental through the agencies are another good option.