By Zhanna Shayakhmetova in International on 15 November 2017

ASTANA – More than 60 participants from 28 countries, including prominent politicians, scholars and leading experts, spoke about global policy issues requiring resolution, sanctions confrontations and prospects of cooperation in the great Eurasian landmass Nov. 13-14 at the third annual meeting of the Astana Club. 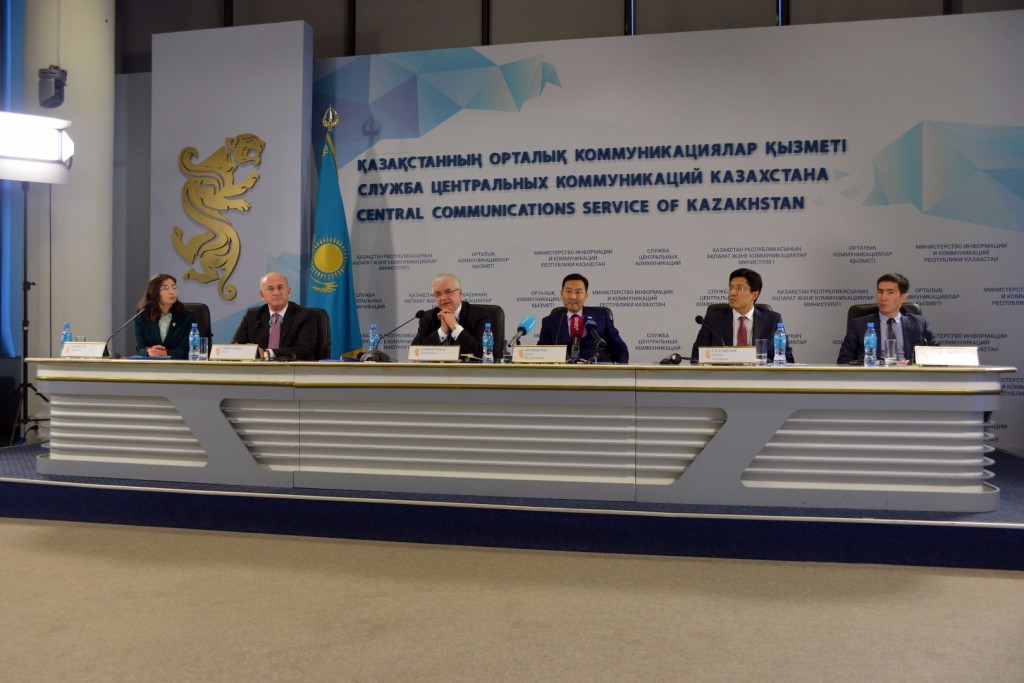 “The speakers raised the issues related to nuclear disarmament and protectionism in world trade. They expressed interest in the further vision of Kazakhstan on the Syrian issue, the Iranian nuclear programme, the investment policy prospects and the country’s plans for economic cooperation in a global and regional context,” said Kanat Zhumabayev, executive director of the First Kazakh President Foundation, at the Nov.14 briefing.

Astana Club meetings are held according to Chatham House rules, which implies anonymity of expert opinions expressed during the discussions.

“The principle of anonymity makes it possible to freely discuss and express different opinions. This year, we also used the principle of panel session,” he said.

The rules do not, however, preclude experts from speaking their mind to reporters outside of the discussion hall. Former Polish Prime Minister Włodzimierz Cimoszewicz used such opportunity and noted there were “interesting debates and rich discussions” at the sessions.

“It was the right decision to choose that kind of topic about Eurasia, because in the changing world when almost everywhere, everything becomes new unlike it was before, it is the perfect time to think in terms about the future of cooperation and the relations of Asia and Europe. Traditionally, geographic distance was a barrier and an obstacle to developing intensive relations. But today it is no longer a major problem. There are means to overcome that barrier,” he said.

He also spoke about the role of Kazakhstan in international relations.

“Many people, especially most of the political leaders, are very well aware of the significance of Kazakhstan’s initiatives concerning the de-nuclearisation of the country over 25 years ago and all of the following initiatives concerning the liquidation of nuclear arms. That used to be a kind of traditional area of Kazakh activity. But in the last ten years there were more initiatives presented by President Nazarbayev to the United Nations and other partners; for example, the problem of Syria where Kazakhstan did a great service in the kind of mediation which was difficult at the very beginning,” he said.

Cimoszewicz noted the participants were impressed by the country’s modernisation plans, including some elements which are directly related to international programmes and projects, the launch of the Astana International Financial Centre (AIFC) and the role Kazakhstan wants to play in the One Belt, One Road initiative.

“Considering the fact that Kazakhstan is a relatively young country and young independent participant of international relations, we have been witnessing the growing activity of your country in international affairs and politics,” he added.

David Chikvaidze, chief of staff of the Director-General of the United Nations Office in Geneva, noted the intellectual and political leadership that Kazakhstan implements on the world arena.

“I would like to note the country’s role in mediation, conflict prevention and resolution. It is no accident that the Syrian talks are held in Astana as a supplement to the Geneva talks. Kazakhstan provided a platform for this kind of international meeting due to impartiality, equidistance and a balanced approach to the issue. Kazakhstan also plays an important role in the issues of disarmament and non-proliferation of nuclear weapons,” he said.

“The Astana Club is a neutral platform with no prejudices,” said Yerzhan Saltybayev, director of the First President Foundation’s Institute of World Economy and Politics, which organises the club meetings. “Our task is to provide a platform and to give an opportunity to discuss many things. Astana secured its role as a global neutral platform, where strategic dialogues take place at the highest political level. This fact attracts new participants to the club. The club has become a centre of attraction for authoritative experts, politicians and diplomats from around the world. The format proved its relevance. Therefore, this work will be continued.”