By Dana Omirgazy in Culture on 9 November 2017

ASTANA – A bas-relief masterpiece created 49 years ago was recently unveiled in the Arman Cinema in Almaty. 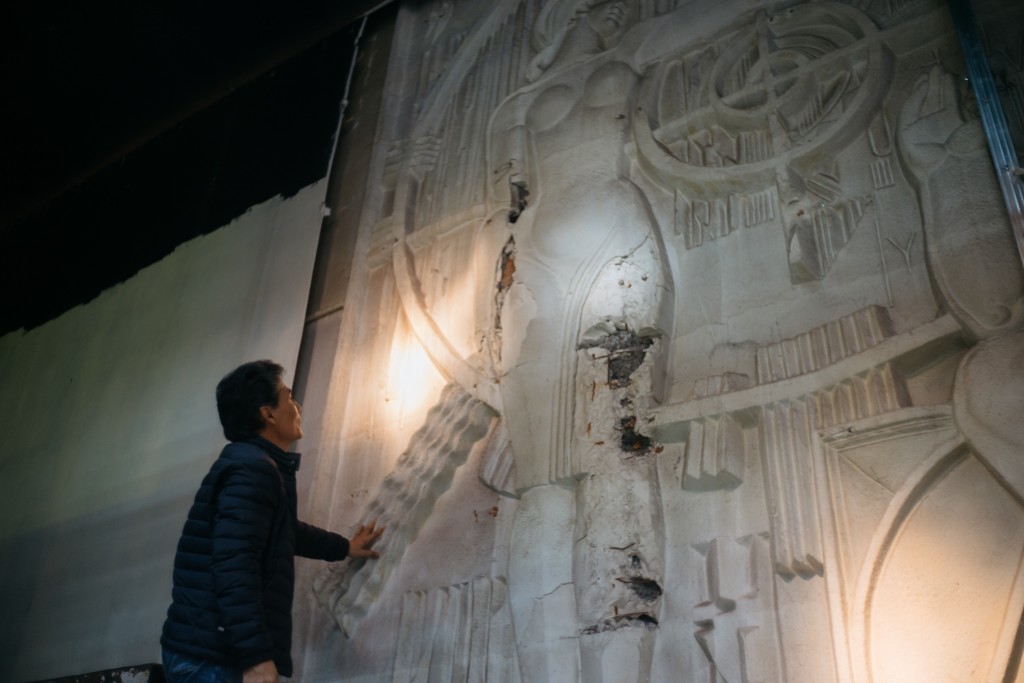 The work of art was discovered by theatre director Baurzhan Shukenov when he watched a black and white video about the theatre’s opening. After replaying the video many times, he realised the bas-relief was hidden behind the drywall inside the building, according to vlast.kz.

“I thought for a long time that I had to find the bas-relief. After all, it was created to give the building its aesthetic value and uniqueness as an example of Soviet monumental art. Now it takes on even greater value, as a phenomenon of a bygone culture,” Shukenov told The Astana Times.

Architects Alexander Korzhempo, Alexey Panin and Innokentiy Slonov designed the building in 1968. Korzhempo imagined the edifice as a splinter of ice which had descended from the mountains. The structure had an interior summer courtyard with a fountain, statue and rose garden and bas-relief with a small pool on the second floor.

The bas-relief is surprising in its beauty and greatness. The composition depicts a man holding a compass and a woman with a cup.

Its designer, Second World War veteran Viktor Konstantinov, graduated from the Leningrad Higher Industrial Arts School in 1958, then moved to Almaty. Many of his works have survived to this day, including a decorative composition in front of the Alatau Hotel. He made several bas-reliefs in Arman Cinema measuring 220 square metres.

The building was renovated as a nightclub in 2000 and the management removed the summer courtyard, installed a glass roof and covered the walls with plasterboard. Seventeen years later, Shukenov wants to restore the building to its original form.

“We won’t change the concept, probably. However, we will approach the building as an institution of culture and art, not only as a movie theatre. We will try to restore unique elements of the façade and interiors. Now, we are working on the design of these changes together with the authors of the building project,” he said.

In advance of the cinema’s 50th anniversary, the administration intends to reinstate the building’s elevation and remove the entranceway which appeared about 20 years ago.

“We will also change a lot of things inside. Now, we need to think about the restoration of this bas-relief,” added Shukenov.