By Danat Islambek in International on 19 October 2017 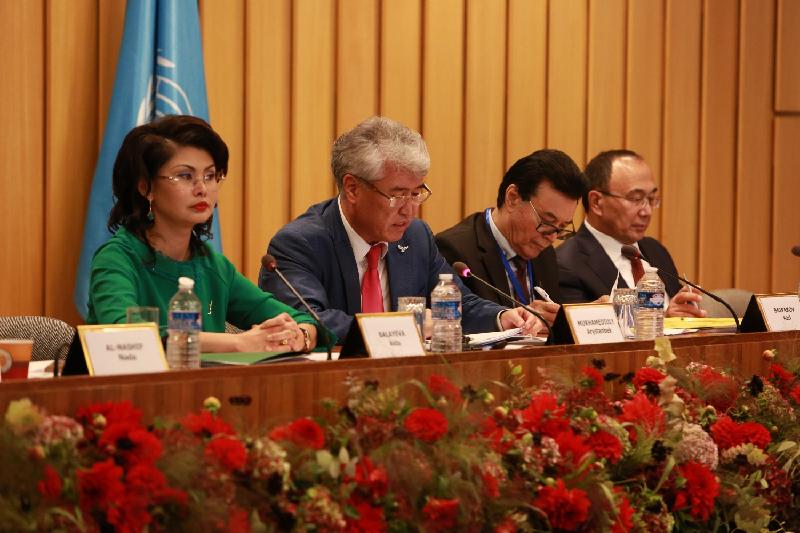 In her welcoming remarks, Nada Al-Nashif, Assistant UNESCO Director-General for Social and Human Sciences, said the organisation was excited to host the introduction, which, among other ventures, envisions promoting Kazakh culture in the international arena. She noted the programme’s importance within the context of the International Decade for the Rapprochement of Cultures (2013-2022), which was launched to help address pressing global challenges through intercultural and interreligious dialogue. Al-Nashif reminded the audience of the pivotal role Kazakhstan played both as a co-sponsor and financial supporter of the 10-year campaign and praised Astana’s efforts to build understanding among cultures, including by convening the triennial Congress of Leaders of World and Traditional Religions.

Al-Nashif also highlighted the country’s multifaceted contribution, referring to the establishment of the Central Asian Regional Glaciological Centre in Almaty as a Category 2 centre.

Aida Balayeva, head of the Kazakh Presidential administration domestic policy department, explained the reasoning behind the programme’s presentation at the Paris-based UN agency.

“The ideas put forward in the Rukhani Janghyru programme by the Kazakh President are based on modern trends and relevant not only for Kazakhstan, but the entire international community. The goal of this presentation is to introduce the Kazakh model for open discussion: on the one hand, we expect constructive feedback and new ideas, and on the other, we hope the world community will learn some useful approaches laid down in the programme,” she said.

Balayeva noted there is a simple, historic logic behind the initiative. After 25 years of successful independent development as a nation, Kazakhstan today aspires to join the world’s top 30 most developed countries. She said the Kazakhstan 2050 Strategy launched in 2012 is the foundation for the new programme, which seeks to modernise the country’s identity.

She also spoke about the world’s fast-moving changes, partly due to the emergence of digital technologies. These changes have led Kazakhstan to take specific measures to achieve a breakthrough to a new level of development, including initiating large scale modifications in both the political and economic domains. Among them are a move to redistribute and decentralise powers and concrete steps to spur innovative ,economic and technological development. Rukhani Janghyru should be viewed as an integral part of this overarching strategy and its successful execution will require active involvement of the entire society, she added.

Balayeva further briefed the audience on the six national projects launched as part of the programme – transitioning the Kazakh language to the Latin alphabet, new humanitarian knowledge with100 new textbooks translated into Kazakh, the Tugan Zher (Homeland) project, the country’s sacral geography, the modern Kazakh culture in the global world and 100 new faces of Kazakhstan.

As the co-chair of the Modern Kazakh Culture in the Global World project, Balayeva spoke at length about its objectives and approaches. The nation is seeking to promote its people’s cultural achievements since 1991 in four major areas – literature, arts, music and theatre/cinema/performing dance – to be presented to the world in the UN’s six languages.

The project will begin with nationwide online voting to select pieces of culture in each category, which will then be presented to the international audience. To promote Kazakh literature, project organisers plan to employ a multitude of tools and approaches, including creating an online library of books by Kazakh authors translated into various world languages and collaborating with the largest publishing conglomerates and authoritative literary agents, said Balayeva.

The project also envisions introducing an online platform where the public could access to high-resolution images of artworks housed in the country’s largest and most renowned museums. Such a platform would enable users to tour museum galleries virtually and explore physical and contextual information.

In addition to the digital approach to promote Kazakh artists and their works, Balayeva suggested hosting regular biennales in Astana could become important international artistic events.

Speaking at the opening of the exhibition, UNESCO Director-General Irina Bokova said the event was yet another tribute to the country’s expanding cooperation with UNESCO which opened a window to Kazakh culture in the French capital.