ASTANA – The qualifying stage for the second Confederation Cup tournament draw was held Oct. 13 in Kazakhstan. The uniqueness of the tournament is due to the fact that it concurrently hosts competitions in four kinds of sports: Greco-Roman as well as freestyle wrestling, taekwondo and judo. 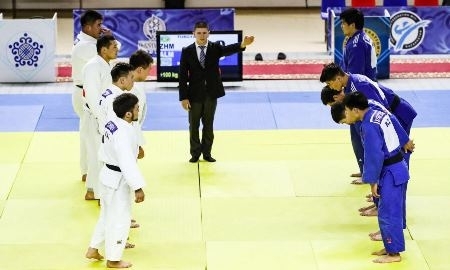 Qualifying stage of group A, which included teams from the Almaty, Pavlodar, Akmola and West Kazakhstan regions, took place last week in Taldykorgan. Those regions seek to identify the best ones in Greco-Roman and freestyle wrestling, taekwondo and judo. Competitions in these sports were held concurrently. Representatives of the Confederation of Combat Sports and Power Sports and the Almaty region management participated in the opening ceremony of the tournament.

“I consider this as a celebration of sports. Representatives of various sports gathered together to demonstrate their skills to the fans. The format of the tournament is interesting and, I think, Confederation Cup has a bright future,” noted bronze medallist in taekwondo at the 2008 Olympics Arman Chilmanov.

Almaty regional teams in the Greco-Roman and freestyle wrestling and taekwondo left competitors from other regions no chances of winning when competing at home and, thus, won the tickets to the semi-final stage of the Confederation Cup 2017. It is worth noting, though, that Almaty regional team in Greco-Roman wrestling included members of the National Team of Kazakhstan in the classical struggle – a silver medallist of the 2017 World Cup Demeu Zhadyrayev and a two-time winner of the Asian Heavyweight Games Nurmakhan Tynaliyev.

Within the framework of the 2017 Confederation Cup, entrepreneurs and sports enthusiasts presented a new car to a new world champion Demeu Zhadyrayev.

Judo competition was accompanied by an acute struggle as well. Pavlodar and Atyrau regional teams fought to make it to the finals. In the end, Atyrau region representatives celebrated victory. The score of the meeting was 3:2.