ASTANA – Kazakh President Nursultan Nazarbayev said that around 1,060 projects were implemented and 100,000 jobs created as part of the industrialisation programme at an Oct.16 meeting with the Minister for Investments and Development Zhenis Kassymbek. 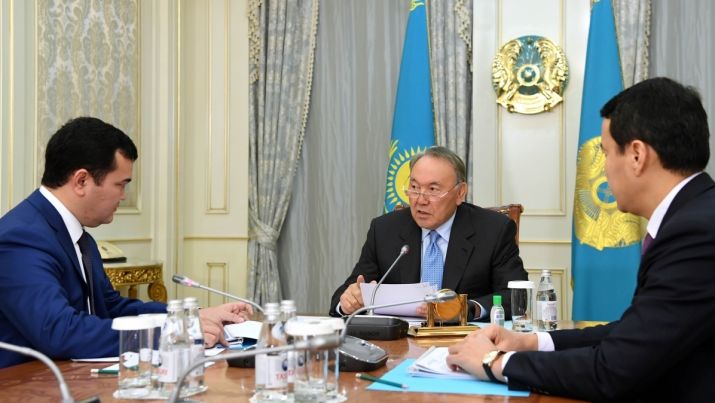 The head of state emphasised the importance of implementing state and sectoral programmes and noted the interim results of its implementation.

“Around 1,060 projects were introduced worth 5.2 trillion tenge (US$15.5 billion) and 100,000 jobs were created as part of the industrialisation programme. Items worth 8 trillion tenge (US$24 billion) have been produced. This is the most important achievement for the country. We are producing 500 types of products that haven’t been produced before,” said Nazarbayev.

The Nurly Zhol infrastructure development programme’s results were also on the agenda.

“Five thousand kilometres of roads were constructed and reconstructed since 2010. Over 4,500 kilometres will be put into operation until 2020. Now 85 percent of the national highway networks are in good condition. The Western Europe-Western China roads and Astana-Temirtau, Almaty-Kapchagai, Beineu-Shetpe, Kokshetau-Petropavlovsk roads were commissioned. Also, the largest bridge in Central Asia across the Irtysh River was constructed. Around 75,000 people were involved in these projects. Ninety percent of all building materials were produced in Kazakhstan,” he said.

The President also noted the economic importance of the Kuryk seaport on the Caspian Sea and the Khorgos, the International Centre of Trans-Boundary Cooperation, on the border with China.

More than 10 million square metres of housing were built as part of the Nurly Zher initiative.

“We are building housing in nine regions. All programmes are aimed at improving the lives of our citizens,” he said.

Nazarbayev said some issues require increased attention of the ministry.

“The state industrialisation programme has not yet ensured diversification of the country’s economy. The share of processing industry in GDP has not changed significantly. All the necessary instruments are available to carry out the tasks set. The ministry is responsible for the implementation of economic and social priorities,” he said.