By Anuar Abdrakhmanov in Sports on 21 October 2017 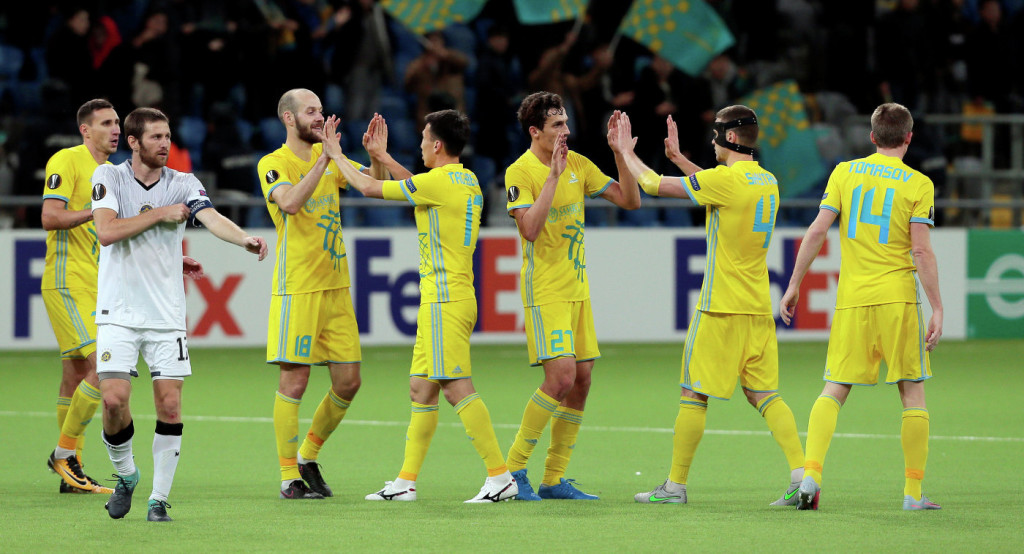 After losing away to Villarreal CF and tying with SK Slavia Praha at home, the Kazakh champions needed three points to preserve a realistic chance of progressing to the playoffs. At first glance, this seemed a considerable challenge, as their Israeli opponents have a solid European record and experience and players who previously played in top-flight clubs in England and Holland.

The hosts looked confident from the early minutes, however, controlling the ball for lengthy periods and gradually pressuring Maccabi’s defences from the flanks. Astana striker Junior Kabananga soon had a great chance to score, but the ball hit a bit above the target. Defender Dmitry Shomko’s kick resulted in the ball striking one of the Maccabi defender’s hands and the referee awarding Astana a penalty.

Midfielder Patrick Twumasi perfectly converted a shot and the hosts opened the scoring. Three minutes before the break, Shomko made a great pass from the wing to the penalty box allowing Twumasi to double his team’s lead.

Astana did not slow down in the second half and clearly dominated the pitch. Kabananga needed only 10 minutes to score two more into Maccabi’s net and the score did not change until the final whistle.

“It is great that we secured our first win in the group of the Europa League. Maccabi is a strong team. After the first 20 minutes of the match, we found the right tactics and deserved our victory. Now we should focus on the decisive matches [in Kazakhstan’s Premier League], as we are close to winning the gold medal for the third time. It is clear that following this success we will be under more pressure in the match in Israel, but will be ready for this [and seek to win again],” said FC Astana head coach Stanimir Stoilov.

“I congratulate all the fans of the Astana team and football fans of Kazakhstan on this beautiful and convincing victory. We had to win this game to improve our tournament position in the group [and] the team showed a brilliant game and beat a strong opponent, playing equally successfully in attacks and defence. This is our first win in this season’s group stage and only the second one in the history of our participation in the group stages [of European club competitions.] I would like to thank our players and the coaching staff for the emotions the team gave to all of us today,” said general manager Sayan Khamitzhanov.

The club will travel to Tel Aviv for the return match with Maccabi scheduled for Nov. 2.