By Anuar Abdrakhmanov in Sports on 2 October 2017

ASTANA – In its first home match at the group stage of the current Union of European Football (UEFA) Europa League season, FC Astana played Sept. 28 against a strong Czech team with solid international experience. Slavia Prague’s lineup this season features some well-known players such as Ruslan Rotan, Miguel Danny and Miroslav Stoch who are familiar to many football fans. The day before the game, Astana encountered injury problems with leaders such as Marin Anicic, Srdjan Grahovac and Laszlo Kleinheisler being ruled out of play due to injuries. 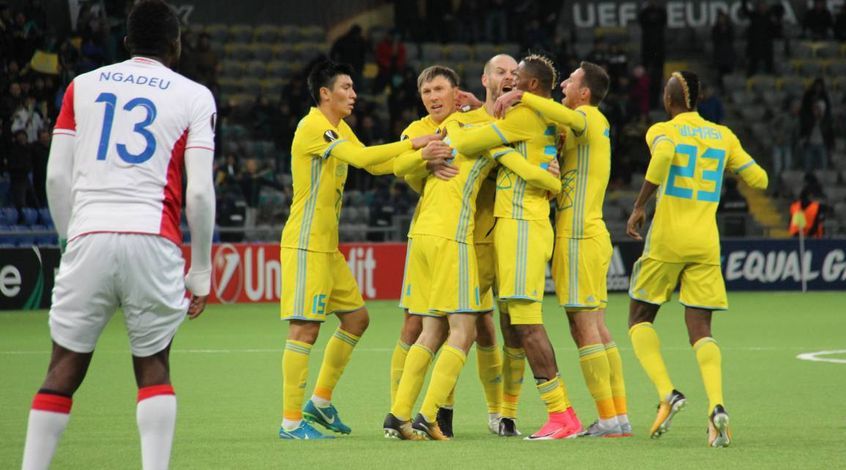 From the very first minutes of the match, the Czech team’s attacks were sharper. The visitors opened the score through a combination that started from a free kick, which resulted in midfielder Michael Ngadeu-Ngajui’s header right into the net.

The hosts responded with midfielder Patrick Twumasi’s dangerous shot from outside the penalty area, but Slavia’s goalkeeper managed a save. The Kazakhs managed to equalise shortly before the half-time. Striker Junior Kabananga made a good long-ranger, which was deflected by the goalkeeper, but Astana’s midfielder Marin Tomasov followed up and scored.

In the second half, Astana felt more confident and made bolder attacks. The team controlled the ball well and found free zones but failed to deliver when it came to scoring. The Czechs coped well and occasionally responded with dangerous counterattacks. In one of them, midfielder Jan Sykora shot from an excellent position but Astana’s goalkeeper Nenad Eric made a great save. Thus, the game ended in a 1-1 draw. On the one hand, Astana did not lose in the home match but on the other the club missed the chance to take two more points that could prove vital when it comes to progress from the group.

“It’s a pity we couldn’t win. But I am glad the team showed a good game and was trying hard on the field. We proved that Astana is a strong club, which is difficult to play against for any team in Europe. We were quite nervous and made mistakes at the beginning of the match, but then we managed to calm down and took control of the ball. I think the fans appreciated the dedication of my players. I would like to specifically mention our defender Igor Shitov. He flew in from Germany, where he received treatment for his injury, only in the morning on the day of the game, but despite this he took to the field and played till the end. It’s good to have such [dedicated] players in our team,” said Astana Head Coach Stanimir Stoilov.

FC Astana will play its next match in the Europa League Oct. 19 at 9 p.m. at the Astana Arena Stadium against Israeli Maccabi Tel Aviv.