ASTANA – Some of the actions planned to help socially rehabilitate former prisoners and citizens in probation were reviewed by Minister of Internal Affairs Kalmukhanbet Kassymov during the Sept. 25 Mazhilis (lower house of Parliament) government hour. 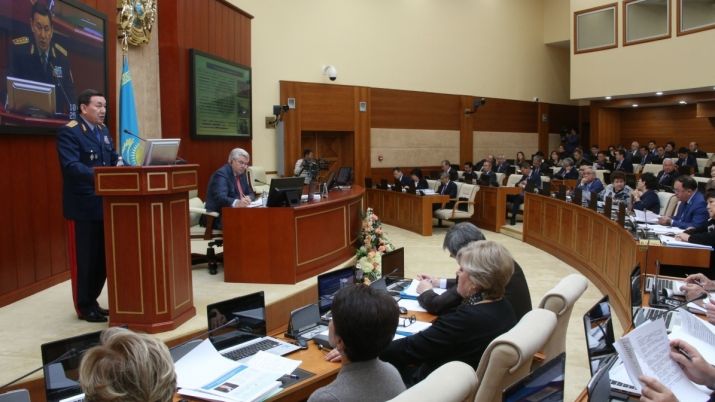 The government is not only interested in providing vocational training, but also in employing convicts while they serve their sentences, he said. Enbek, the state enterprise under the jurisdiction of the penitentiary system committee, is currently handling the issue.

“The production and potential of our enterprises are not great; the existing conditions are tough. Today, with a competitive market economy, it is hard to achieve full employment of the convicts. However, this problem is being purposefully solved,” he added.

Kassymov reported entities within the correctional enterprises have mastered producing metalworking and woodworking products, construction materials, garments and other goods. Manufacturing agricultural items has been established in a number of institutions. The production scale is just enough to meet the needs of the correctional system.

“Small and medium-sized enterprises (SMEs) are involved in operations of the enterprises within the correctional institutions. Since last year, 274 SMEs have been transferred to the management of former unoccupied productive enterprise areas, where currently more than 3,000 convicts are employed. Thirty-four convicts have exercised their rights for running a business and became entrepreneurs. Some convicts are engaged in household work and serve at the correctional institution they are in. Currently, 68 percent of the convicts who are able to work are provided with paid positions. This enables them to pay for various claims such as damages, alimony and fines, as well as send material help to their families,” he said.

Developing entrepreneurship in correctional institutions is not the only way business and the institutions are connected. The Ministry of Internal Affairs developed a plan to introduce electronic bracelets for probation control which is completely reoriented towards Kazakh business. The programme is expected to be realised in 2018 as part of a larger project of partnership between the state and private sector.

“We are planning the introduction and use of electronic monitoring of people who are on probation control. This is about the introduction of so-called ‘electronic bracelets.’ Annually, approximately 6,000 people will be under control via those bracelets,” said Kasssymov.

He added the ministry refused to purchase the bracelets due to the expense for the budget.

“We were offered Russian and Israeli bracelets. However, who will deal with post-purchase service and maintenance? Who will do this? We followed a different path. A factory with Japanese equipment was built in Talgar and this programme is going through expertise now,” he said.