By Aigerim Bulambayeva in Business on 26 October 2017

ASTANA – The popularity of cryptocurrencies, and the scepticism around them, are, paradoxically, on the rise. In an interview with The Astana Times, Nazarbayev University School of Business Dean Dr. Patrick Duparcq spoke about the scrutiny around cryptocurrency and its future in Kazakhstan and throughout the world. 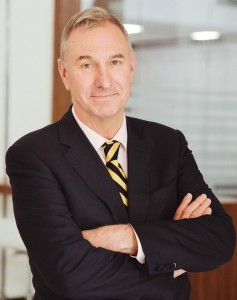 Duparcq is a recognised technology strategist and visionary with 20 years of expertise in forecasting, marketing and implementing. His current activities include technology forecasting and providing application frameworks and strategies for businesses, specifically in digital and global marketing.

In essence, cryptocurrency is a unit means of exchange where the value of the exchange unit is determined by the global exchanges in that currency. Unlike regular national currencies, governments cannot manipulate cryptocurrency exchanges, for all transactions are in an encrypted shared ledger. Therefore, cryptocurrency is – at least theoretically – a more truthful representation of the real value. Though this is an apparent advantage, it comes at a certain cost.

“Cryptocurrencies are a more realistic reflection of the currency value than traditional currencies, which are easily manipulated by governments. On the other hand, governments sometimes need monetary policy to stimulate the economy or cool down the economy. A cryptocurrency in its purest form would eliminate this very important tool for the government,” said Duparcq.

While the fact that cryptocurrencies undermine monetary policy lays the groundwork for scepticism among experts, commoners are more concerned with the anonymity issues.

“A cryptocurrency holder can send exactly the amount to the merchant or recipient with no further information like credit card information. On the other hand, governments sometimes need tracking to detect criminal activity,” said Duparcq.

Whether cryptocurrency can gain ground in Kazakhstan is another concern, but Duparcq’s predictions are rather positive.

He added there is a natural need to depart from cash towards a more efficient means of payment and cryptocurrency, along with e-pay, as one of the viable options of cashless transactions.

“David Chaum, one of the early pioneers in virtual currencies, recognised early on that the cost of producing and administering money bills and metal coins is an unnecessary drain on the economy. For instance, in Kazakhstan this ‘cost of cash’ is estimated to be around 1.5 percent of Kazakhstan’s GDP, which is roughly $2 billion,” said Duparcq.

If the economy operated without cash, though not necessarily through cryptocurrencies, the money spent as the “cost of cash” could have been invested in infrastructure, education or other fields with a better yield. That said, for cryptocurrencies to thrive and actually have a future in Kazakhstan, or any other country, a list of certain preconditions must be met.

Some of the main features of a successful cryptocurrency are simplicity and universality, said Duparcq. Cryptocurrency must be easy to use online, a smartphone or other device and be accepted everywhere. Other essential characteristics include currency conversion and trustworthiness, and the government must ensure that trustworthiness by backing it up.

Despite the popular opinion that cryptocurrency is deliberately designed in a way to avoid third parties and intermediaries, including government interference, true believers would strongly disagree and argue that “non-regulation” is at its very core.

“The ability for the government to have a monetary policy, to fight crime and to provide trust in a cryptocurrency would require some level of regulation,” said Duparcq.

The aforementioned conditions must apply to any cryptocurrency that strives to achieve enduring success. A report in August noted two Kazakh-based cryptocurrencies – altyncoin and eurasiancoin – are to be released in the second half of 2018.

“They can have a future other than short term speculative opportunities if the preconditions are in place,” he said.

“In ancient times, people had pieces of gold with them for their transactions. We went past that and I strongly believe that in 20-30 years from now there will be very little cash, if any at all,” added Duparcq.