ASTANA – The Economist and the Greek-Eurasian Business Council brought together over 500 representatives of governments, universities, transnational and logistics companies in Athens Oct. 9-10 for discussions on the development of transport and the commercial flows of goods and services between Europe and Asia during the first of its kind EU-Eurasia-China Business Summit titled “Building Bridges from East to West”. 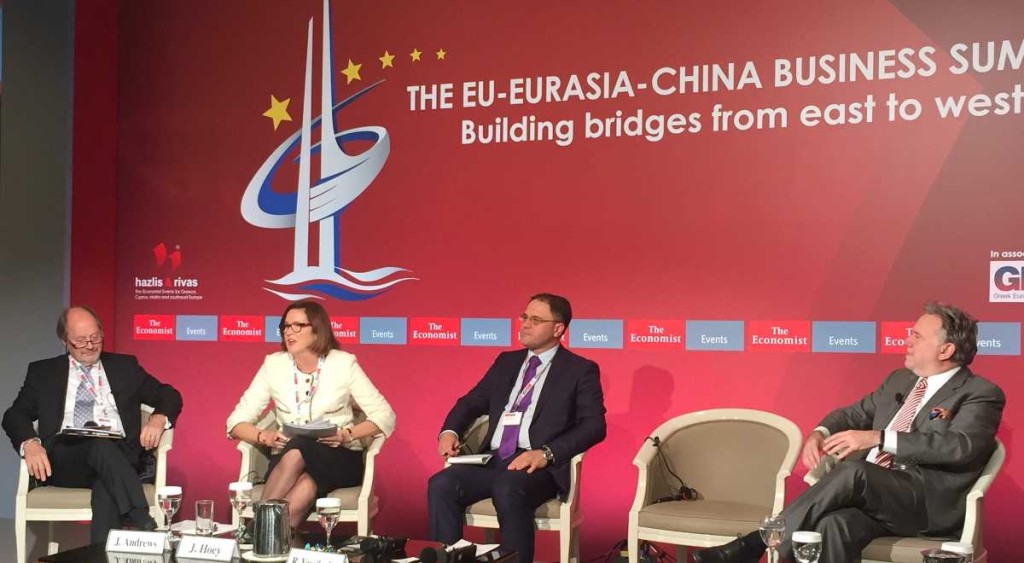 Speaking at the opening panel session of the event, Kazakh Deputy Minister of Foreign Affairs Roman Vassilenko noted that due to its geographical position, Kazakhstan is crucial for the success of the Silk Road of the 21st century and was appropriately called by foreign experts a “buckle” in China’s famous Belt and Road Initiative.

Underscoring the interconnection of Nurly Zhol infrastructure development programme in Kazakhstan and the Belt and Road projects, the Kazakh diplomat informed that over 2,500 kilometres of railways and about 4,000 kilometres of highways were built in Kazakhstan over the years since independence. Among other important developments, according to Vassilenko, are the construction of the modern dry port Khorgos on the border with China and modernisation and expansion of the Aktau port on the Caspian Sea. Vassilenko emphasised that these efforts have created opportunities for new “logistic gates” for the transportation of goods through Kazakhstan to Europe and back and have led to an increase in transit container traffic through the country 100 times in five years by 2016. He added the development of transcontinental transport routes carries an important added value in the form of strengthening the economic potential of the countries involved and, more importantly, strengthening security in the centre of Eurasia and engaging Afghanistan in these processes. 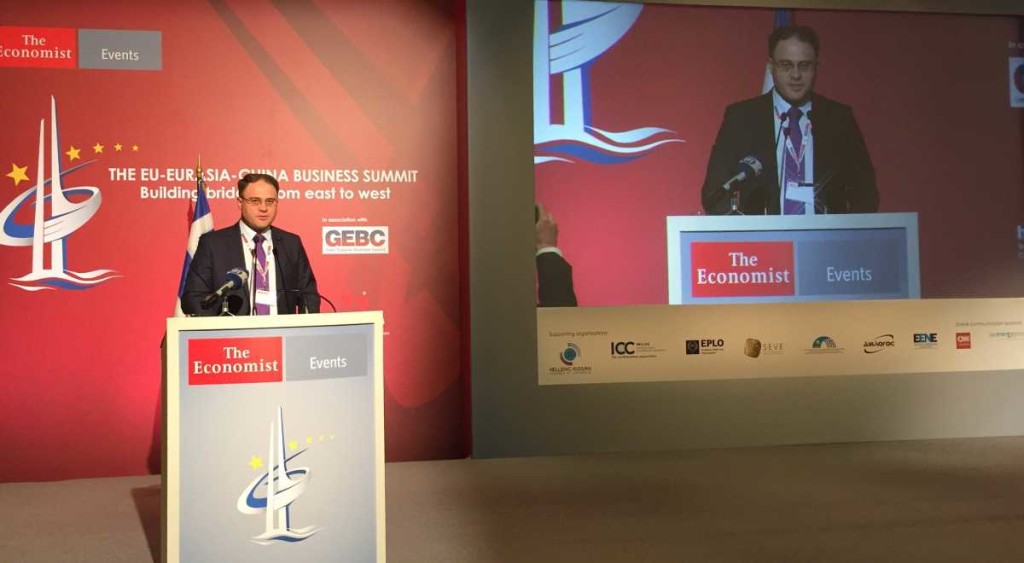 The Kazakh diplomat called upon international transport and logistic companies to consider cooperation with Kazakhstan and its national companies, including the joint construction of logistics terminals.

The forum was an important event for Greece and European countries, as evidenced by the participation of Greek President Prokopios Pavlopoulos. In his speech, Pavlopoulos noted the enormous potential for developing Europe’s relations with Eurasia and China, as well as the need to support “regional integration schemes in the wider Eurasian region, which should contribute to peace, growth and prosperity of the peoples.”

He stressed that “Greece as a European country at the crossroads of three continents, throughout its history has been open to communication and interconnection of different countries and cultures by land or by sea.” According to Pavlopoulos, Greece plays a key role in the efforts to establish economic cooperation between the EU and the wider Eurasian region.

According to Kazakh Ministry of Foreign Affairs, as part of his trip to Athens, Vassilenko also met with his Greek counterparts, including Minister of Tourism Elena Kountoura; Alternate Foreign Minister for European Affairs and co-chair of the Kazakh-Greek intergovernmental commission for economic and technological cooperation Georgios Katrougalos, Deputy Minister of Foreign Affairs Terens-Nikolaos Quick; co-chairman of the Inter-parliamentary Friendship Group Leonidas Grigorakos, as well as President of the Greek-Eurasian Business Council Spiros Kouvelis.

During the meetings at the Greek Foreign Ministry, the sides discussed expanding trade and economic cooperation. In particular, Vassilenko invited Katrougalos and Quick to lead business and political delegations to Astana in the near future.

The Kazakh diplomat highlighted cooperation opportunities connected to Kazakhstan’s membership in the Eurasian Economic Union, and that of Greece in the European Union. He called on his Greek counterparts to complete the ratification of the Kazakhstan-EU Enhanced Partnership and Cooperation Agreement in the near future, which will open a new page in bilateral relations.

In the Greek Parliament, the sides discussed the importance of building up a political, inter-parliamentary and cultural dialogue. During the meeting, Grigorakos stressed that he was closely following positive changes in Kazakhstan and its multinational and multi-confessional society.

In his opinion, “over the past years Kazakhstan has travelled a significant path to modern thinking, sciences and innovations.” Speaking about the Greek diaspora living in Kazakhstan, Grigorakos noted the importance of strengthening friendship and the “living bridge” that unites our countries. In this context, the Greek parliamentarian expressed deep interest in studying the experience of the work of the Assembly of People of Kazakhstan and ethno-cultural centres.

Vassilenko noted the EU visa regime simplification for the citizens of Kazakhstan would facilitate a closer dialogue between the countries. He stressed that Kazakhstan unilaterally introduced visa-free regime for citizens of Greece and all other EU countries from Jan. 1, 2017. According to the diplomat, such a step would allow to increase cooperation in the field of tourism and bring significant economic benefits.