By Anuar Abdrakhmanov in Sports on 3 October 2017

ALMATY – The Astana Pro Team’s Alexei Lutsenko of Kazakhstan has once again won the Tour of Almaty, this time in the race’s first iteration as a multi-day event. 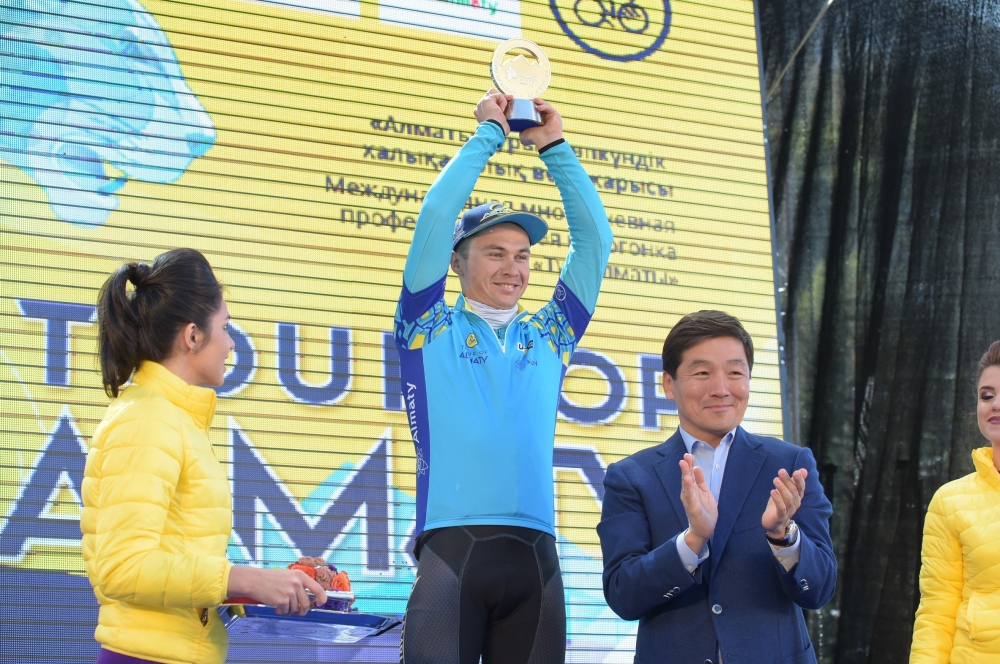 “The International Cyclists Union (ICU) approved the two-day format. This indicates that holding the Tour of Almaty for the previous four years paid off,” Vice President of the Kazakhstan Cycling Federation Amanbek Kulchikov said at a press conference. “We wanted to show all the beauty of the Almaty mountains during the broadcast. This year, the duration of the race’s transmission on the Eurosport TV channel increased by half an hour, and will now be 1.5 hours. Two days is not the limit for the Tour of Almaty. The race has the potential for growth and improvement. This needs to be done in a gradual, thoughtful way, without haste.”

On the first day, the cyclists raced on the city’s wider streets. Astana Pro Team’s Lutsenko showed the best result, celebrating success in the Almaty race for the fourth time. The second day saw the cyclists riding uphill all the way to the famous Medeu skating rink, and this time Lutsenko’s Danish teammate Jakob Fuglsang won, with the Kazakh rider finishing second, just 12 seconds behind. Third place was taken by a rider from the Swiss Roth-Akros, Colin Chris Stussi, who came another 12 seconds after Lutsenko.

“The race went well for me, and the whole team did great. Astana Pro Team was very strong today. I am very happy that I won the Tour of Almaty. This race is very important for the team, because it is held in Kazakhstan and the level of Tour of Almaty is very high. I think it was great to have the second stage in the mountains, because it is very beautiful there,” Fuglsang said after the race.

The Tour’s general classification after two days had Lutsenko as the winner. Fifty-five seconds behind was runner-up Remy di Gregorio of the French pro-continental team Delko Marseille Provence Ktm. Third place went to Fuglsang, whose result was one minute, four seconds behind the winner.

“It was a challenging and nervous race, very intensive. Our team did well today. We had a tactic in the end to allow Jakob to take the initiative. You all know he is good at mountain cycling. So he made an attack some five kilometers before the finish. Other racers could not catch up with him. I was always second or third. Jakob did a great job all the way to Medeu. The team work was great, we won both stages, grabbed the first and third places in the general classification,” commented Lutsenko.

At the race’s awards ceremony, winners in two additional categories were decorated: Lutsenko as the leader of the sprint classification and Rory Townsend from Bike Channel Canyon (UK) as the holder of a polka dot jersey for the best mountain rider.