By Dana Omirgazy in Culture on 6 October 2017

ASTANA – I’m a Singer, an international vocal competition, is being hosted this fall by the Almaty Akimat (city administration) and Channel 31. The project, aimed at promoting modern Kazakh culture abroad and increasing the city’s tourist draw, is part of the Ruhani Zhangyru (Modernisation of Kazakhstan’s Identity) programme, and, in particular, its Contemporary Kazakhstan Culture in the Global World project. 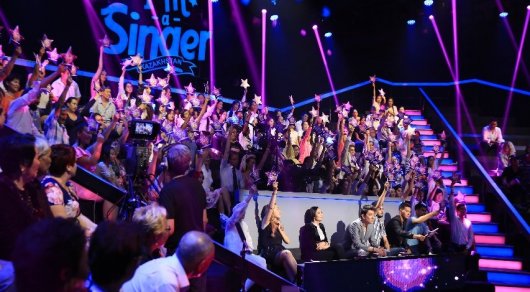 The contest features professional vocalists throughout Kazakhstan and other countries, according to organisers. The competition is being broadcast on the main TV channels in Russia’s Bashkortostan and Tatarstan, as well as in China, Kyrgyzstan, and Uzbekistan, reaching an audience of more than 250 million.

Eighteen-year-old Assylzat Ayap is representing Kazakhstan on the popular show.

“I am happy that I will be able to convey through the music the rich musical heritage of Kazakhstan and introduce other countries and other nations to our culture. It’s not for nothing that they say that music is a song of the soul and the history of the whole people,” she said.

Aitugan Gaizullin, of Bashkortostan, expressed “great gratitude” to the host nation for the chance to be part of the international show.

“Thanks to this project, I gained a lot of experience and became popular in my country. I met friends and supporters. I believe that by participating in this project, each of us contributes to the development of the music industry of our countries. When singing songs, we share cultural values and abilities,” he said.

“It is an honour for me to participate in this contest. For the first time in my life, I am representing my country in such a large project. The contest gave me the opportunity to acquire not only spiritual, but also cultural affinity. I learned about the most important things in the culture, customs and traditions of Kazakhstan,” he said.