ASTANA – ACF Kairat Almaty, two-time holder of the UEFA Futsal Cup, progressed from second place to the tournament’s elite round during the Oct. 11-14 group one main round in Minsk, Belarus. 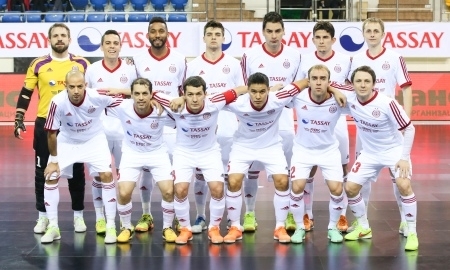 In the first match, the Kazakh team defeated Italian champions ASD Pescara C/5. The hosts had some issues on defence, since Leo was still not completely recovered from an injury and Douglas Junior had a fever the day before the game. Yet the latter not only played the match, but become one of its key players.

In the first half, Douglas Junior scored a double before the Italians responded with a free kick goal by Leandro Cuzzolino a few seconds before the break. Kairat scored three more goals in the second half through the efforts of Droth, Alexandre Moraes and goalkeeper Higuita, securing a confident 5-1 win.

The Kazakh champions faced the group’s fellow FC Dynamo Moscow in the next match. The Russian club took the lead in the early minutes, but Kairat soon seized the initiative, resulting in two straight goals by Rego Taynan. After the break, Hossein Tayyebi and Tynan each scored two to complete a hat trick and Chingiz Yessenamanov added one more. Dynamo responded with only one score by Sergei Orlov, giving Almaty the 7-2 victory.

The team registered its first loss in the final game against FC Stalitsa Minsk. Despite maintaining a three-goal advantage throughout most of the game, the Kazakhs let victory slip away. Thanks to two goals from Yesenamanov and one from Da Rosa, the club had a solid lead at halftime. The Belarusian hosts, however, scored five in less than 15 minutes, with Ruslan Lazyuk, Bruno Santiago (two), Mychailo Grytsyna and Taros Korolyshin securing the 5-3.

“First of all, I want to congratulate our opponents. I think I learned a good lesson. They focused during the second half and achieved a deserved victory. The absence of Tayyebi and Douglas is not an excuse, because we have the whole team playing. They beat Kairat, which is one of the best teams in Europe. This game should become a lesson for us,” said Kairat’s well-known manager Cacau.

As a result, Kairat ended the tournament as runners-up, second only to the hosts. The finish was enough to progress to the elite round, which will be held Nov. 21-26. Kairat is one of the favourites.