ASTANA – The U.S. Defence Institute for Medical Operations (DIMO) organised a three-day training for 35 Kazakh soldiers from the country’s United Nations peacekeeping battalion. The training, held at the Kazakh Ministry of Defence Centre for Military Medicine, was supported by the defence departments of both nations. U.S. experts noted the Kazakh military members met the challenges. 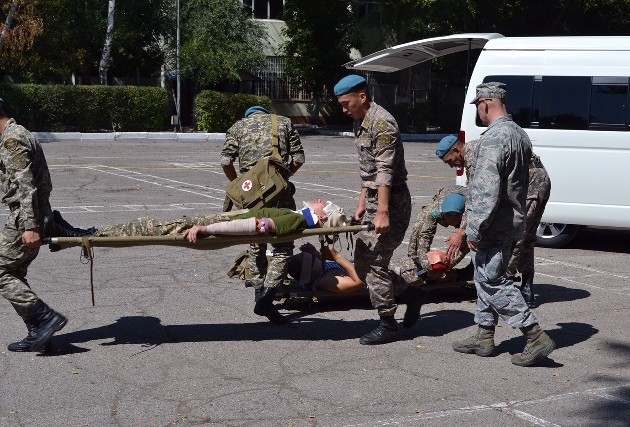 The training occurred in two stages, starting with American colleagues training 12 instructors. The second phase involved them working together to begin training peacekeepers who lack medical education, according to the Kazakhstan Assault Troops press service.

Kazakhstan’s future “blue helmets”, as UN peacekeepers are known due to their distinctive headgear, studied the theoretical part of the training and practiced their skills using special simulation equipment. The aim is to improve the fighters’ skills in providing first aid for mass wounds.

The peacekeepers acted in conditions as close as possible to an emergency situation. According to the details of the mini-exercises, 12 people were seriously injured as the result of a head-to-head collision between a minibus and an off-road vehicle. Arriving at the site of the incident, peacekeepers needed to assess the situation and provide first aid to the victims before the arrival of professional medical experts.

The peacekeepers must act according to international standards, using internationally-accepted designations. The wounded are divided into four categories, with all victims marked using a specially-coloured card pinned to their clothes. A green card means light injury; yellow, that medical help may not be urgent. A wounded person with a red card needs medical attention immediately, while black indicates the person is dead. 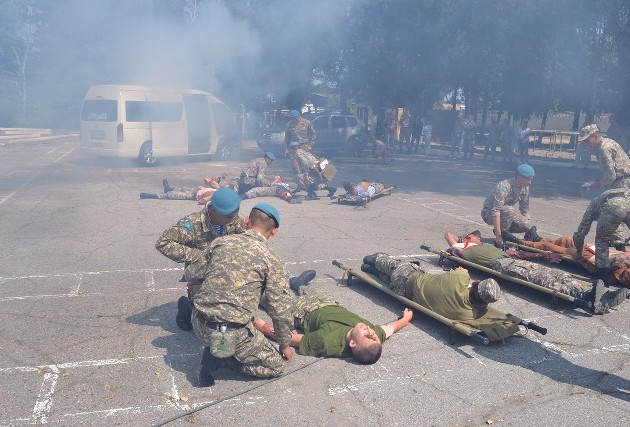 Training manikins are equipped with sensors. If the service person acts correctly, two green bulbs light; if the medical manipulations are not performed correctly, they burn red. The simulation equipment has figures of men, women and even babies, since everyone needs first aid in such situations.

Service people, trained at the Centre for Military Medicine, will join the Kazakh peacekeeping battalion. The facility will become a regional centre by 2022, where military personnel from Central Asia can upgrade their medical skills.

DIMO is a dual-service agency comprised of U.S. Air Force and Navy personnel committed to providing globally-focused healthcare education and training to partners around the world. It is a small facilitating organisation that offers courses and trainings to bring people of various countries together to help build a common base of understanding among dedicated healthcare professionals.