By Zhanna Shayakhmetova in Nation on 21 September 2017

ASTANA – Kazakhstan will create a pool of qualified imams whose activities will focus on targeted work with representatives of destructive currents, said Minister for Religious and Civil Society Affairs Nurlan Yermekbayev at a Sept. 18 government hour in the Parliament. 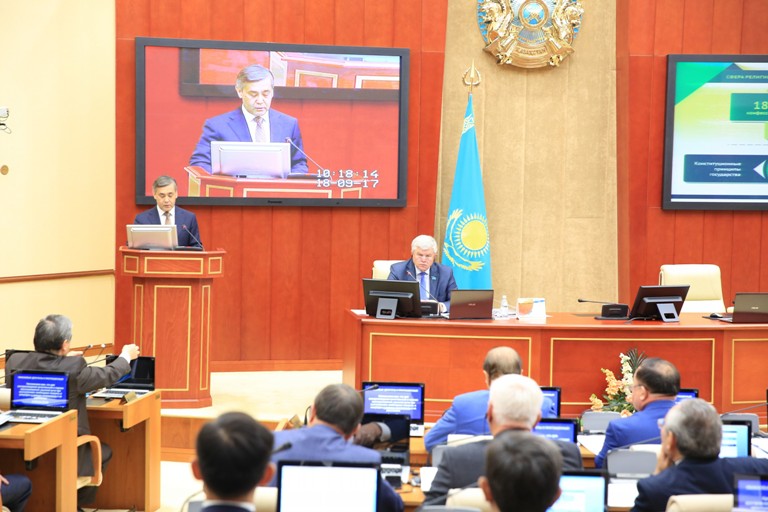 The ministry developed a state religious policy concept for 2017-2020 which has been approved by a presidential decree. The aim of the document is to strengthen the country’s role in regulating policies in the religious sphere. The draft law is being discussed with the public and experts and will be presented at the Mazhilis in October.

“The measures have been taken to change the ways of their work as part of the cooperation of the Spiritual Board of Muslims of Kazakhstan. The work of the Imam corps is redirected from mass to targeted work with the public. We also carry out the explanatory work mainly among believers in religious buildings,” said Yermekbayev.

The unified rules of conduct in mosques developed and introduced by the Spiritual Administration of Muslims of Kazakhstan are based on the ministry’s recommendations.

“Recently, there have been a lot of complaints that the same rituals are conducted in different ways by the imams in the regions. Therefore, the issue of unifying some of the rituals is also under consideration,” he added.

The nation has more than 3,693 religious communities representing 18 denominations. Reports indicate 10 percent of Kazakh residents are atheists or agnostics, 75 percent are religious believers but do not fulfil all religious pillars and only 16 percent of believers fulfil all the pillars and practice regularly. Eighty-five percent of the population has expressed its dislike of destructive ideas.

“The largest numbers of adherents to destructive religious movements reside in the Atyrau, Mangistau, Aktobe and the South Kazakhstan regions and Almaty,” said Yermekbayev.

The country’s religious level has increased, which provides more opportunities for the influence of radical ideology, he said. As a result, the ministry is forming a special group of scientists and religious scholars who will develop the basis of the Kazakh school of Islamic studies.

“The Hanafi madhhab is our traditional confession in Islam. The explanatory work is being held with the representatives of different destructive religious movements. This is their personal delusion and their own personal misconception of faith,” he said.

Kazakhstan has 306 special theological and information groups to increase citizens’ religious awareness and literacy and the ministry developed approximately 50 methodological recommendations and guidelines. More than 13,000 thematic events were held in collaboration with these groups involving more than one million people.