By Aigerim Seisembayeva in International on 7 September 2017 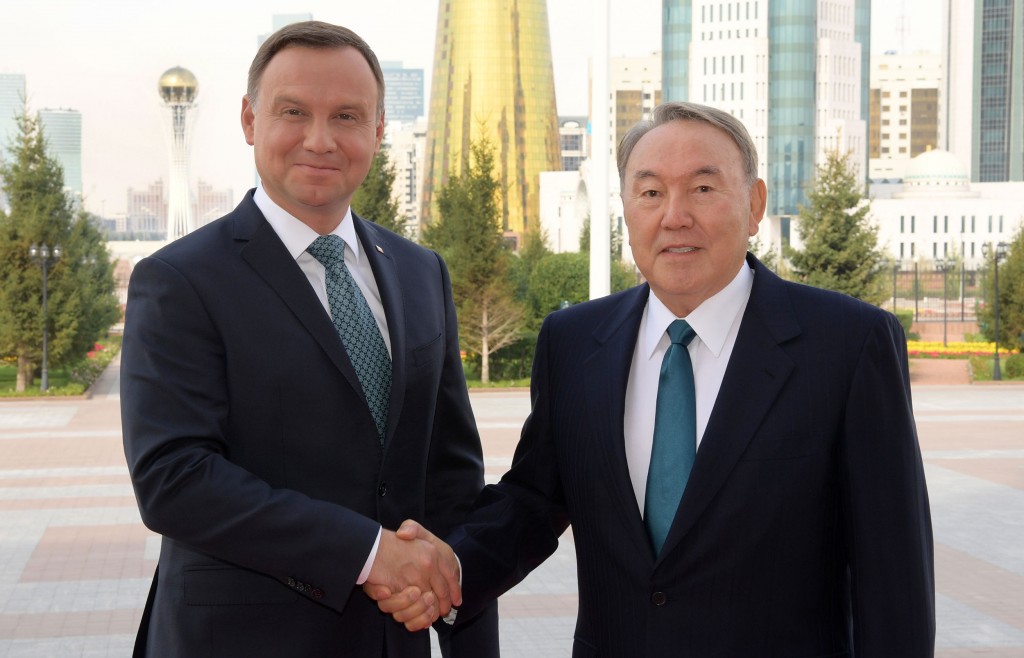 Nazarbayev thanked his counterpart for visiting during EXPO 2017 and noted that last year’s Kazakh-Polish business form in Warsaw produced 15 agreements totalling $1 billion and a plan to launch direct flights between Kazakhstan and Poland, since then implemented by LOT Polish Airlines.

The Kazakh President also mentioned efforts to create a more favourable investment climate and emphasised the importance of expanding trade and economic cooperation. “The investment climate in Kazakhstan is recognised by international organisations as very favourable. At present, we have established Kazakh Invest, a company that works with foreign investors. In addition, when the expo is over, the Astana International Financial Centre will begin operating based on English common law. Almost all the world’s leading financial institutions have agreed to work in the AIFC,” he said.

Nazarbayev also highlighted that Kazakhstan is a key regional trading partner for Poland and a base to enter the Central Asian and Eurasian Economic Union markets. In turn, Duda said Nazarbayev’s last year’s visit to Poland boosted bilateral trade and economic relations.

“I am confident that we will be able to achieve a high level of turnover through our joint efforts. I would also like to thank you for the opportunity to visit the EXPO 2017 and see both the Polish and the Kazakh pavilions. This exhibition is a good demonstration of modern technologies of renewable energy sources and a safe use of traditional sources,” said the Polish President as the two leaders addressed the press briefing following their talks in the Akorda.

At the press briefing, Nazarbayev said that 115 enterprises backed with Polish capital operate Kazakhstan and Polish businesses have invested more than $200 million in Kazakhstan. He also said opportunities are emerging in machine building, agriculture, energy, chemistry, transport and construction. He said Kazakhstan wishes to work jointly with Poland to develop a modern transport infrastructure to speed  cargo delivery between Asia and Europe.

Nazarbayev thanked Duda for ratifying an enhanced partnership and cooperation agreement between Kazakhstan and the European Union and noted the importance of working together on international issues during Poland’s UN Security Council 2018-2019 membership. Kazakhstan already is a member of the UN Security Council for 2017-2018.

The Polish President said he believes the two countries are on a path toward stronger relations.

“We are following the path that is aimed at improving Kazakh-Polish relations. I thank the President of Kazakhstan for supporting Poland’s bid for a non-permanent membership in the UN Security Council. We will apply Kazakhstan’s experience in our work within this organisation. Kazakhstan’s role in the UN Security Council is very important, especially I would like to note the effective mission implemented by your country for the peaceful settlement of the conflict in Syria,” Duda said.

He also said he hopes the positive trends in bilateral trade observed since the beginning of this year will continue and it will eventually reach at least $3 billion. According to Duda, Polish exports to Kazakhstan grew 50 percent this year so far, while imports from Kazakhstan increased by 80 percent.

“Polpharma pharmaceutical company is an example of a successful partnership. Selena Group Company implemented a project on the production of building materials on the territory of the Astana New City special economic zone. KazTechMash plant launched agricultural machinery production in Petropavlovsk using the technologies of a Polish Pronar Company,” he said.

Nazarbayev also said the countries can increase cooperation through Polish businesses participating in Kazakhstan’s privatisation and agricultural sector. Kazakhstan’s accelerated modernisation is another area for cooperation, he said.

The forum was divided into thematic sessions: financing joint economic enterprises, energy and mining, regional cooperation and infrastructure development. Cooperation documents between Kazakh and Polish companies were also signed, including in inter-regional cooperation. The forum was organised by the Kazakh Ministry of Investment and Development, the Atameken National Chamber of Entrepreneurs and the subsidiary organisation of Kazakhstan’s Foreign Trade Chamber. Forty Polish media outlets covered the event.

Poland is one of Kazakhstan’s leading economic partners in Central and Eastern Europe. Trade turnover with Kazakhstan constitutes more than 80 percent of Poland’s total trade with Central Asian countries.