ASTANA – Curling has never been popular in Kazakhstan, but interest in the sport has developed dynamically since the Winter World Universiade 2017. The country now has a national team, which is holding friendly matches in preparation for the World Cup. Competitions between mixed teams and juniors are organised at the Almaty Arena ice palace, reported Zakon.kz. 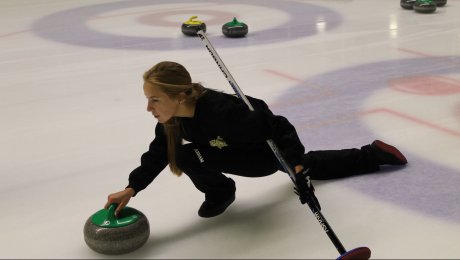 “Despite the fact that the new curling season has just begun, we did not stop training. National men’s and women’s teams, mixed teams (men and women) and athletes with hearing disorders and organ transplants are involved in the trainings. We recently used a training camp in Korea, where we were supported and provided everything necessary for the trainings. We spent 10 days at one of the best stadiums in the world,” said Kazakhstan Curling Association Secretary General and head coach Viktor Kim.

“Now, we are preparing for the new season and we will soon go to Turkey to prepare for the World Cup among the mixed teams, which will be held Oct. 14-16 in Switzerland. After that, we plan to participate in the Pacific-Asian championship, where teams for the Olympic Games will be selected. After this event, we are going to have trainings in Korea again,” he added.

The sixth winter sports and athletic meeting, the main start of the four-year national level, will kick off in Kazakhstan in December. Curling will be presented in four disciplines: men, women, mixed couples and mixed teams.

As a new sport for the country, curling is unfamiliar to many citizens, but there is a keen interest. The 827 officially registered athletes claim this sport is absolutely for everyone.

Curlers take turns sliding heavy, polished granite stones across the ice towards a target area of four concentric circles. The two competing teams have four players and eight stones. Points are scored for the stones resting closest to the centre of the target area and teams strive to accumulate the higher score.

“Today is the first training after our trip to Korea. In fact, there is a difference between our ice and the Korean one, which corresponds to Olympic standards,” said women’s national team captain Zarema Abdykadyrova.

She believes in the need to have a will and if there is a will, there will be a result. Abdykadyrova suggests everyone engage in the sport, because it is suitable for people of all ages, adding the number of people interested and involved has grown significantly in recent years.