ASTANA – The Italian pavilion celebrated National Day at EXPO 2017 Sept. 4 with a performance by the Nello Salza Ensemble and the famous trumpeter for whom the group is named. The event opened by raising the flags and performing the national anthems of Italy and Kazakhstan. 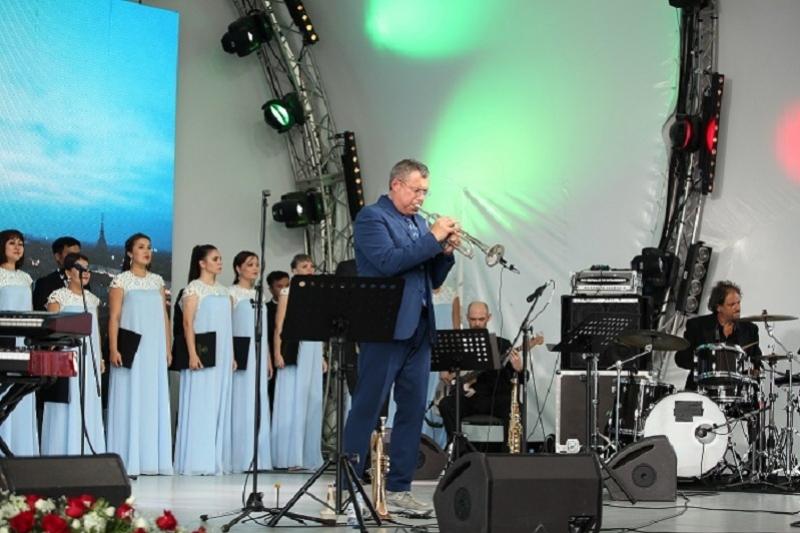 “Italy rightfully occupies an important place in the foreign policy of Kazakhstan, being one of the most active economic partners among European countries. This is evidenced by the presence of a number of large Italian companies and the dynamic development of trade and economic cooperation. I would like to note the fruitful work of the Kazakh-Italian intergovernmental working group on industrial economic cooperation, which strengthens the partnership relations between the two countries,” said Kazakh Vice Minister of National Economy Aibatyr Zhumagulov during the official part of the event.

He noted trade between Kazakhstan and Italy for the first half of this year was $4.8 billion, a 39-percent increase compared to 2016.

Italian Ministry of Economic Development Undersecretary Ivan Scalfarotto noted the expo will give impetus to developing his nation’s renewable energy sector in cooperation with other countries, including Kazakhstan.

“Indeed, there is a great similarity between the themes of the exhibitions – EXPO Milan 2015 and EXPO Astana 2017. Both exhibitions call for finding difficult solutions to global problems, since the deficit, shortage of food and energy resources are always topical issues at any time for humanity. Therefore, for the future prosperity and for our generations, we must come up with new ways of solving difficult problems,” he said.

The opening ceremony was followed by Salza performing with the capital’s Philharmonic Chamber Choir. He began his career as first trumpet of the San Carlo Theatre in Naples, then with the Opera Theatre in Rome. Salza has travelled to five continents with the Academy of Santa Cecilia Orchestra and soloists Andrea Bocelli, Jose Carreras, Placido Domingo and Katia Ricciarelli.

Known as “The Trumpet of the Italian Cinema, Salza has performed popular scores in films such as “Once upon a Time in America” directed by Sergio Leone, “The Untouchables” by Brian De Palma, “The Legend of 1900” and “Cinema Paradiso” by Giuseppe Tornatore, “Life is Beautiful” by Roberto Benigni and the recent “The Hateful Eight” by Quentin Tarantino. The last featured the 2016 Oscar winning best original score by Ennio Morricone.

National Day is an important celebration, with more than 400 people visiting the venue, said Italian Pavilion General Manager Valentina Pomatico. She was pleased with the turnout.

“We are happy, we are satisfied – I think we had big success,” she said.

“Milano was an international exhibition, while the one is Astana is the specialised one in the middle between Milano and Dubai. The Kazakhstan one is strategic. Italy decided to participate in this. It is different from Milan, but I think it was very successful. The Kazakh side did a very good job,” she added.

The pavilion features 15 of Italy’s 20 regions presenting relevant achievements in green energy and using the platform to develop business and cultural events, said Italian Ambassador to Kazakhstan and EXPO 2017 commissioner Stefano Ravagnan. The pavilion has also hosted important events in the space and transport industries. He noted the nation succeeded in finding prospects in green economy, as Italian company Bionet SRL signed a memorandum with Kazakh Invest in July to construct a plant in the capital.