ASTANA – The sixth round of the international meetings on Syria ended Sept. 15 in Astana with the participants agreeing on a final de-escalation zone in Syria’s northwestern Idlib province. It will be the fourth zone where no military activity would be allowed as envisioned in the May 4 agreement signed by Iran, Russia and Turkey, guarantor states to the ceasefire regime, during the fourth round of talks in the Kazakh capital. 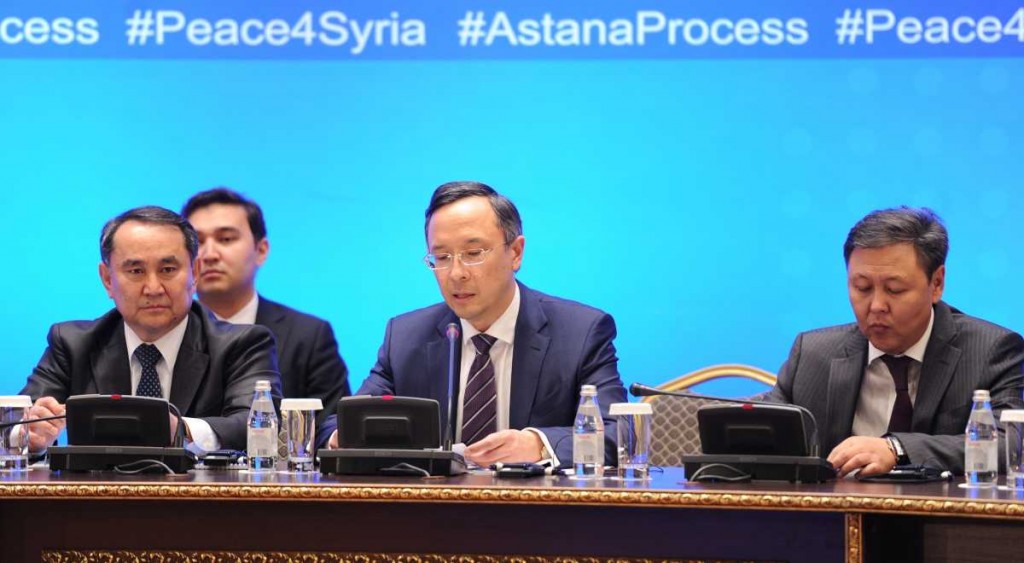 The so-called Astana process that has been going on since January supplement the UN-brokered Geneva talks meant to find the political resolution of the six-year conflict.

Delegations of the three guarantor states, the Syrian government and Syrian armed opposition factions took part in the sixth round, while the UN special envoy on Syria Staffan de Mistura and delegates from Jordan and the U.S. attended the talks as observers.

“Few believed in the success of the Astana process launched in January this year, however, thanks to the determination of the participants of Astana talks, there is now hope to resolve this acute crisis through peaceful means. Today, the participants can go further as they managed to overcome many challenges and achieve considerable results in restoring stability and peace in Syria. They reached what seemed to be impossible and efforts in this direction led to the creation of de-escalation zones in different parts of Syria,” noted Kazakh Foreign Minister Kairat Abdrakhmanov during a plenary session wrapping up the two-day closed-door negotiations.

In a joint statement read by Abdrakhmanov, Iran, Russia and Turkey announced the creation of the de-escalation zones in eastern Ghouta, in certain parts in the northern Homs province, in Idlib province and in certain parts of the neighbouring provinces, including Latakia, Hama and Aleppo, as well as southern Syria. The measure will be in force for six months and will be extended if necessary with the guarantors’ consensus.

Iran, Russia and Turkey will have control over the de-escalation zones and would deploy the forces in accordance with the maps endorsed Sept. 8 in Ankara. The guarantor states also agreed to set up a joint coordination centre to coordinate activities in de-escalation areas.

The creation of de-escalation zones does not in no way undermine the sovereignty, independence, unity and territorial integrity of Syria, said the minister as he read the statement.

“We believe that the process launched in Astana will strengthen the regime of cessation of hostilities and have a positive impact on upcoming Geneva talks under the auspices of the United Nations,” said Abdrakhmanov on his own behalf.

Head of the Syrian government delegation Bashar al-Jaafari called the Astana talks the “only successful platform in the Syrian process,” which provokes interest among other countries to join the negotiations.

“However, the issue of other countries joining the process is not on the agenda. Probably, we will take that into consideration in the future,” said al-Jaafari.

Yet, Idlib province was not the only topic discussed during the sixth round of talks, according to High Negotiations Committee (HNC) advisor Yahya al-Aridi, as the issue of tens of thousands of Syrians locked in prisons was also on the agenda.

“Another matter is detainees, whom some people call buried alive. Tens of thousands of people are there. Thousands of them were tortured and killed. None of the parties raised this issue to the regime,” noted al-Aridi.

Russian President Vladimir Putin’s Special Representative for Syrian settlement Alexander Lavrentiev, however, committed to bringing the issue to the table in an attempt to build a dialogue with the opposition group, a critical factor in the fight against terrorist groups that are recently becoming more active in Syria.

“We need to involve armed opposition in the fight against terrorism. The unity of all Syrians in the fight will not only foster positive changes, but will also build dialogue and trust between them,” noted the head of the Russian delegation.

Similar to his colleagues, Lavrentiev commended the outcomes of the two-day negotiations and the potential of the Astana talks.

The participants of the meeting also thanked Kazakh President Nursultan Nazarbayev for his commitment to the Syrian process and the Kazakh government for hosting the meeting.

The next round of talks is scheduled for the end of October.