ASTANA – Kazakh State Secretary Gulshara Adbykalikova, deputies, representatives of state bodies and the alphabet developers attended discussions in the Mazhilis (lower house of Parliament) Sept. 11 about the draft of the Latin alphabet scheduled to enter in force by 2025. 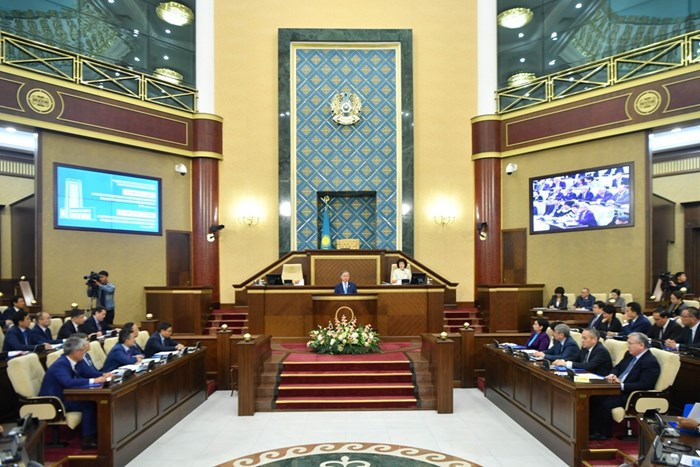 The idea of switching from Cyrillic script to Latin script was first voiced by Kazakh President Nursultan Nazarbayev in his 2012 state-of-the-nation address. Earlier this year, he instructed the government to develop and endorse a single Latin-based version of the Kazakh alphabet by the end of 2017.

The Kazakh language used Arabic script until 1929, when it transitioned to Latin script. The latter was in place until 1940, when Soviet authorities introduced Cyrillic script. Transitioning back to Latin script is a historic milestone in the nation’s cultural and spiritual development, said Mazhilis chair Nurlan Nigmatulin.

“Language has always been an important foundation of every nation along with its history, culture and territory. That is why President Nursultan Nazarbayev has paid very special attention to the development of the Kazakh language since our independence. He made the transition of the Kazakh language to Latin script one of the key priorities in his recent article ‘Course towards the future: modernisation of Kazakhstan’s identity,’” he noted.

“The alphabet reform has historic roots and it also seeks to enhance the global competitiveness of Kazakhstan and promote accelerated integration in global scientific, educational, technological and communication space,” he added.

The modernisation will allow tapping into the language’s full potential not only as a tool of communication, but also as a strong factor of spiritual revival and strengthening national identity, said Nigmatulin, adding the reforms would not influence the national language policy.

“The alphabet reform affects solely the Kazakh language. The transition to the Latin script primarily intends to reform the Kazakh alphabet and spelling rules allowing for conformity between its phonetics and graphics. The President’s firm position on this issue should make people aware of the fact that the Russian language, as a global language with strong cultural and historical roots, will continue playing an important role in Kazakh society,” he noted.

Active public involvement in the process may ensure the success of the upcoming reform, he added.

The government is preparing a comprehensive set of measures to familiarise people with the new alphabet, including publishing education and methodology materials and developing mobile apps and information programmes.

“This is the instrument that does not separate, but, conversely, serves as a tool of communication that is well familiar to people in Kazakhstan. It is also worth noting that the Latin script will enable us to adopt international scientific and technical lexicon in the national vocabulary,” he said.

Mazhilis deputy Pavel Kazantsev also spoke about the current favourable conditions that would allow for a smooth transition.

“The Kazakh society should understand that the transition from Cyrillic to Latin script will eventually make the nation more united and will push it closer to scientific and technological progress leading to Kazakhstan’s further integration in global communication processes,” he noted.

Once the draft alphabet was made available to the public, however, it provoked heated discussions, particularly concerning the spelling of specific Kazakh sounds using diphthongs that make recognising and reading text more complicated. Citizens also emphasised the use of the consonant “w” to convey the vowel “u.”

“People are concerned about ‘w.’ English has such a sound. You perceive everything normally when articulating, but you cannot perceive identical sounds in the Kazakh language. This is a psychological aspect. There is no such sound in the Russian language; therefore, many people spell Kokshetau as Kokshetav and this is one of the most frequent sounds in the Kazakh language,” said philological science professor and PhD Alimkhan Zhunisbek.

Diphthongs are necessary to preserve the nature of the language and express specific Kazakh sounds, said National Coordination and Methodological Centre for the Development of Languages head Yerbol Tleshov.

“If we adopt various sounds in the classic alphabet used by many countries around the world, then we will not be able to achieve our goal. Using diphthongs allows us to preserve our specific sounds, but using diacritical signs that some of our colleagues advise only allows us to distinguish similar sounds in spelling, but loses the nature of the sound. If digraphs convey one sound with two signs, diacritical ones are created artificially,” he said.

“I think the project will be discussed. The main signs are fine, but of course, the work is yet to be done. In general, 99 percent of the project is fine, yet there are some controversial aspects. For instance, Turkic nations usually tend to express one sound with one letter. Our languages have a phonetical principle, which means one letter conveys one sound, but English, German and French languages use diphthongs, which goes back to their history,” he noted.

The working group added the project is a draft, conveying the group’s openness to public suggestions and comments.

“I do not know whether we can say that the alphabet will be welcomed or not, because it is not an apartment or a car. There may be some questions about words or sounds and in this case, we will go back to some sounds and letters. In general, we will use this alphabet version as the foundation,” added Tleshov.