By Anuar Abdrakhmanov in Sports on 18 September 2017 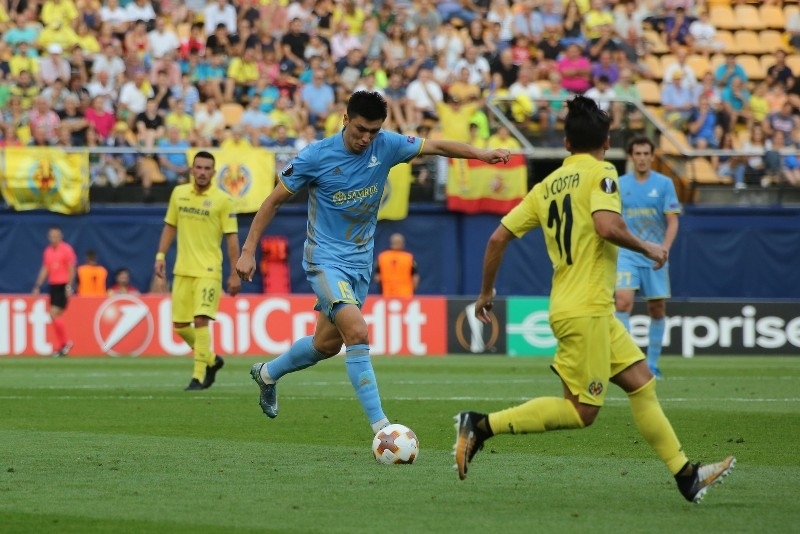 The teams played one another three years ago in the last qualifying round of the same tournament. The Spaniards, known locally as El Submarino Amarillo or Yellow Submarina because of their home kit colour, secured a confident 4-0 win in that battle. Four members of Astana’s current line-up played in that game, including defenders Abzal Beisebekov, Yevgeny Postnikov and Dmitry Shomko and forward Patrick Twumasi. Midfielder Serikzhan Muzhikov went to Spain as well, but sat out the match. This time Villareal, known for its successful performances in the last two decades in the Spanish Premier League and European tournaments, was the favourite again.

To the surprise of the host team’s fans, Astana was quite active early in the match. Muzhikov made the game’s first shot towards the goal, but it went above the bar. Villarreal responded by dominating for a long period, putting pressure on Kazakh goalkeeper Nenad Eric. Ultimately, a shot by forward Nicola Sansone reached its aim for a 1-0 lead. The visitors’ forward Roman Murtazayev responded with a dangerous header, followed by Beisebekov and Twumasi’s long-range shots, all saved by Villarreal goalkeeper Mariano Barbosa.

Astana finally managed to even the score midway through the second half. Assisted by Twumasi’s corner kick, defender Yuri Logvinenko headed the ball into the hosts’ net. Villarreal needed only seven minutes, however, to prove its status as the team to beat. First, Cédric Bakambu had a clear run on goal, sending the ball into the right top corner of the net. Russian Denis Cheryshev then finished his partner’s cross from the right flank, setting the final score and win for the Spanish club.

“We tried to play good football. The team can be more dynamic and aggressive. Slight mistakes were made [when we missed] three goals. I am glad we scored a goal [following our good performance early] in the second half, but we still weren’t active enough in attacking,” said FC Astana head coach Stanimir Stoilov.

The team’s next match will be Sept. 28 against SK Slavia Prague. Kick-off will be 9 p.m. at Astana Arena.