ASTANA – December will be a fascinating month for Kazakhstan’s financial sector, as the long discussed and awaited Astana International Financial Centre (AIFC) will be officially presented. AIFC Governor Kairat Kelimbetov talked about some of the nuances of the project during a Sept. 20 press conference. 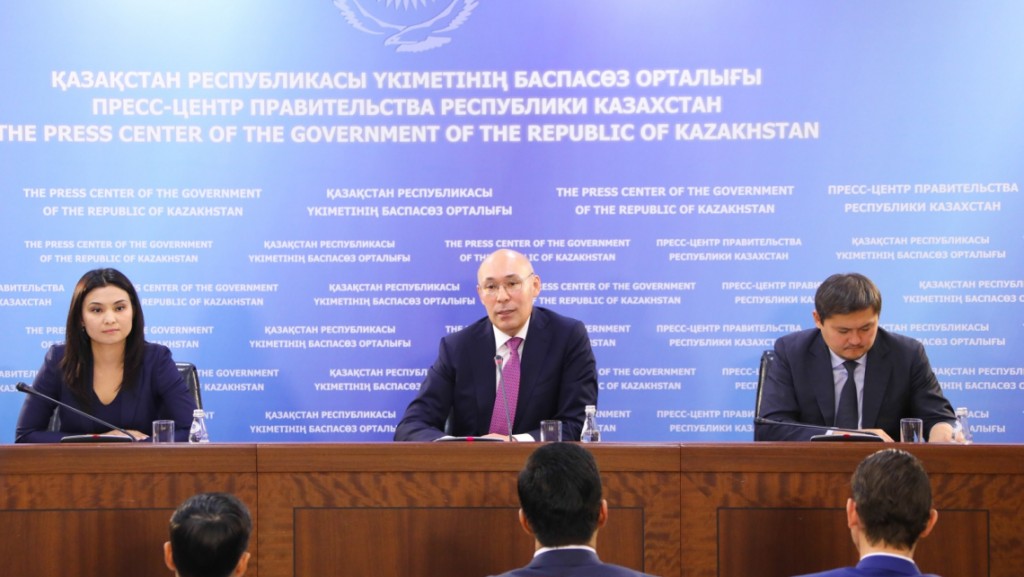 The centre will be located within a portion of the EXPO 2017 pavilions, as the grounds are suitable for developing the trending blockchain and cryptocurrency technologies, he said.

“We assume that the territory of the expo will become a kind of crypto valley or crypto harbour. The whole world is very interested in this. Some central banks are supporting this direction, others are looking [at them] closely. The United States and Singapore want to equate the activities of crypto-economic with ordinary activities in the financial sphere. In Switzerland, this direction is strongly encouraged and Japan supports some cryptocurrencies as a means of payment. We want to say that in this direction AIFC will be on the ‘edge’ concerning understanding the processes that are taking place. But on the other hand, we are responsible for issues of financial stability and regulation of certain financial institutions,” he added.

Earlier this month, AIFC signed a memorandum of cooperation with Microsoft to create the Blockchain Innovation Centre, which will create an effective platform to initiate and develop start-up projects.

Kelimbetov also spoke about the Astana International Exchange (AIX). High-tech infrastructure for the exchange, which promises to adhere to the best world standards, will be installed in the centre. AIX is expected to become the main platform to privatise the companies of Samruk Kazyna Sovereign Wealth Fund.

He also addressed the issue of the capital becoming another offshore by saying that AIFC prefers the term ‘mid-shore.’

“Some expert circles have a negative connotation of that word [offshore], but there are different types of offshores. The London network was the first world offshore. That is, this is the direction where international sites as a whole interact with each other. We like the concept of ‘mid-shore’ more. We will join all initiatives. Kazakhstan supports the Financial Action Task Force on combating money laundering and combating terrorism. We will stick to the position of Singapore, which says that a very strict regulatory regime is better than some offshore schemes that quickly appear and quickly disappear,” said Kelimbetov.

The infrastructure is important, but the professionals working at AIFC play an even bigger role, especially when talking about English common law, which has never before been introduced in Kazakhstan. Kelimbetov said that the financial centre will be focused on hiring local people, such as graduates of the Bolashak Programme who studied at the world’s leading universities, the country’s IT and financial universities and Nazarbayev University.

“Therefore, even in the direction of the judicial corps, we signed a special memorandum with the Supreme Court. [Members of] the Prosecutor General’s Office of Kazakhstan are taking a relevant internship in London and the U.S. under the Bolashak Programme in order to understand how English common law will come into contact with ordinary Kazakh law. We agreed that the Supreme Court will support the activities of our court and ensure the execution of those decisions, which our court will accept. In those areas where we do not currently have world-class specialists, we will attract them. In those areas where there is an opportunity to pull up local personnel, as well as regional ones in a broad sense, we will stick to this direction,” he stressed.

One of the financial hub’s priorities will be developing capital markets, said Kelimbetov.

“You know that our financial sector is more focused on the work of banking institutions and traditional instruments of interaction with the public such as deposits and lending. We are now working on the creation of a non-banking financial community. We believe that the capital markets will significantly improve the situation in the financial sector of Kazakhstan, on the one hand, and on the other will create a regional platform for the development of stock markets in our region,” he said.

Another priority will be managing private and public assets and individual funds and wealth management, often called private banking. AIFC is also focused on developing Islamic finance and Kazakhstan has hosted several conferences on the topic this year.

Financial technologies will also be important for AIFC.

“You know that the head of state recently held a meeting on the Digital Kazakhstan programme. This is a serious and important programme of the government for the coming period. At this meeting, he has instructed making AIFC a leading expert centre in the development of new financial technologies. We are in close contact with all the world’s leading players in this field. In the near future, we plan to join a consortium of international hi-tech hubs which include leading global banks which are currently searching for appropriate solutions, including national and regional cryptocurrencies and in the field of blockchain technologies,” he added.