By Zhanna Shayakhmetova in Business on 9 August 2017

ASTANA – Burnoye Solar – 2, the first large-scale solar plant in the country with a capacity of 50 megawatts, will be constructed in the Zhualynsky district of the Zhambyl region. 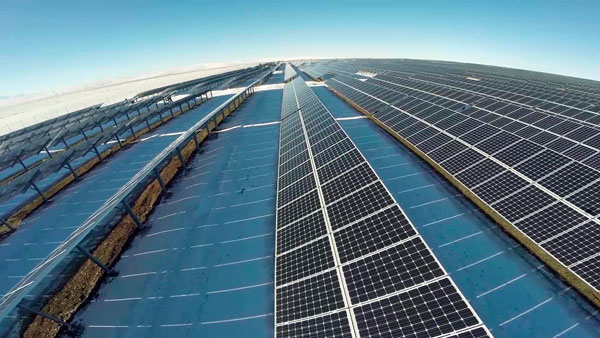 The project, implemented by Samruk Kazyna United Green Energy, is a joint venture of the UK-registered private investment company UG Energy and Samruk Kazyna Invest, reported the regional administration press service in early August. The European Bank for Reconstruction and Development (EBRD), in partnership with the Clean Technologies Fund, will finance plant construction.

As an environmentally-friendly project that meets world standards, the solar plant is expected to lead to a significant reduction in carbon dioxide emissions in the region. It may also cover energy shortages in the southern regions.

“Twelve investment projects for the construction of hydro, wind and solar power plants with a capacity of seven-300 megawatts have been implemented and are planned for launch with the adoption in 2009 of the law on Renewable Energy Sources Support in Kazakhstan. There are plans to implement seven renewable energy projects with a total capacity of more than 230 megawatts. The development of renewable energy sources is becoming increasingly urgent due to hydrocarbons’ falling prices. This will be our contribution to the development of the green economy,” said Zhambyl Region Akim (Governor) Karim Kokrekbayev.

The Zhambyl region is one of the leaders among the regions in developing renewable energy sources. The list of projects includes the first 1.5-megawatt industrial wind power plant at Kordai pass, the small 9.2-megawatt hydropower station at Tasotkel reservoir, the 1.5-megawatt Merken hydroelectric power station and the 2.3-megawatt Karakystak hydropower plant in the Ryskulovsky district.

The share of green energy in the region’s total electricity production will increase to 40 percent.

The Otar, the first solar power plant in Kazakhstan and Central Asia with a capacity of seven megawatts, was put into operation in the Kordai district in 2012 using $1.3 million in private investments.

The 50-megawatt Burnoye Solar – 1 solar power station, situated on 150 hectares with approximately 192,000 energy-producing solar panels, was built in the Zhualynsky district in 2015. The plant, which is able to produce 73 million kilowatt-hours of electricity per year, has created nearly 250 jobs.