By Mikhail Maksimov in Business on 5 August 2017

ASTANA – Fluctuations of the tenge’s exchange rate in the currency market are based on a number of factors, including concerns about the future of ruble after the U.S. additional sanctions against Russia, as well as boom demand on dollars caused by speculative comments in mass media. 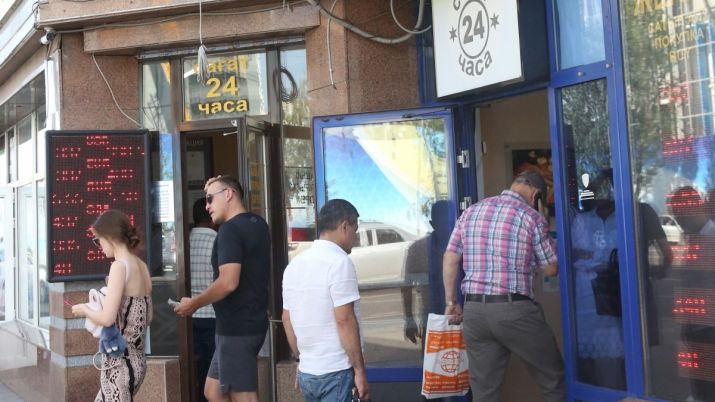 Changes of the tenge’s exchange rate on the internal currency market once again drew the attention of Kazakhs to the information boards of exchange offices. Over the week, from July 26 to Aug. 2, the weighted average rate of the tenge at the Kazakhstan Stock Exchange decreased by approximately 2.6 percent to 335.21 tenge per one U.S. dollar.

The reasons for the recent high volatility of the tenge’s exchange rate against the dollar were commented on by Aliya Moldabekova, director of the Department of Monetary Operations of Kazakhstan’s National Bank.

“The tenge demonstrates depreciation compared to foreign currencies. Apart from oil prices, the currency rate is impacted by the combination of fundamental factors: forex rate of countries that are the main trading partners, balance of payments, level of inflation, base rate of the National Bank, world interest rates and others. However, the tenge rate and an increase in volatility in the short term can be influenced by a range of factors, including a sudden change of expectations of market participants,” she noted.

According to her, the current dynamics of tenge rate is firstly explained by expectations about the negative impact of the U.S. additional sanctions against the Russian Federation and uncertainty about possible future developments and relevant dynamics of the Russian ruble. Moreover, certain speculative mass media comments fuel rush demand on U.S. dollars.

She highlighted that the exchange rate fluctuations presuppose changes both in one and in the opposite direction, depending on the combination of fundamental and short-term factors.

“Considering that the current dynamics of the exchange rate has largely resulted from speculative factors, the National Bank does not see the rationale in purchasing foreign currency from the population,” concluded the representative of the regulator.

As for oil prices as one of the crucial factors influencing the tenge rate, despite some decrease, the October futures price for Brent crude oil remains above $50 per barrel, which was repeatedly called relatively comfortable in Kazakhstan.

In turn, the preliminary assessment of Kazakhstan’s balance of payments over the first half of 2017 published Aug. 1 by the National Bank also demonstrated an improvement in the macroeconomic picture of the country. According to the regulator, the current deficit in the balance of payments decreased by 30.5 percent in the first 6 months and amounted to $2.6 billion. The National Bank named the increase in global oil prices and the launch of production at the Kashagan field among the factors that ensured export revenues growth. World prices on Brent crude oil on average were $52.2 per barrel in the first half of 2017, compared to $40.2 on average in the first half of 2016. As a result, the trade surplus almost doubled – from $4.6 billion to $8.6 billion.

Last week, the Moody’s international rating agency upgraded Kazakhstan’s outlook from “negative” to “stable.” The agency explained the improvement of the country’s creditworthiness by the fact that, in its opinion, Kazakhstan’s economy has managed to adapt after the sharp decline in oil prices.

In the meantime, despite favourable macroeconomic prerequisites, participants of the financial market note that fluctuations of the tenge rate, which is freely floating, are possible.

“Currently, the national currency is freely floating and its rate is quite volatile. There are no attempts of any kind to fix the tenge’s exchange rate against the US dollar made by the National Bank or the government. For today, the state is not spending currency or other means to maintain the exchange rate as it was before, tenge was actually released in free floating,” said the member of the Management Board of Halyk Finance Murat Temirkhanov last week.

He reminded that the tenge’s exchange rate is fundamentally influenced by two main factors – oil price and ruble to dollar rate.

“This is obvious, because the country’s balance of payments is heavily reliant on oil export. It also significantly depends on imports from Russia that mainly pays in rubles,” Temirkhanov added.

“In general, Kazakhstan’s economy is in good shape this year. GDP in the first half showed unexpectedly large growth. The balance of payments is also in good state and there are no negative trends related to it. The deficit of the national budget is less than the figures planned by the government, and there are no signs of its sharp deterioration by the end of the year. There is no pressure on the currency reserves of the National Bank and the National Fund, and their level is so high that they can easily absorb any external and internal short term financial shocks,” he concluded.