By Aigerim Seisembayeva in International on 13 August 2017 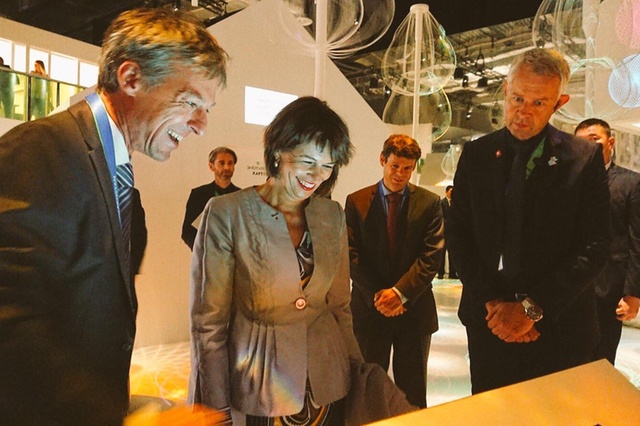 The discussion between the two leaders acknowledged the 25th anniversary of diplomatic relations between the countries and covered developing bilateral political and economic cooperation.

“I welcome your first visit to our new capital. On Aug. 1, Switzerland celebrated Swiss National Day and I congratulate you on this occasion. You also opened the national day at the expo today. I hope you enjoyed it. Your visit to the expo is very important to us,” said Nazarbayev during the meeting at the Akorda.

He also noted the high level of cooperation between the nations and expressed hope for its continued progress.

“For Kazakhstan, Switzerland is a very important European partner. We cherish our relations and seek to develop them further. Our trade turnover is growing and we are interested in expanding Swiss businesses’ participation in our economy. To date, there are 300 Swiss enterprises operating in Kazakhstan and the number can grow. I hope your visit further deepens our economic and political relations,” he added.

Leuthard thanked the Kazakh leader for the meeting and congratulated him on the expo’s success.

“The Nur Alem pavilion is indeed very impressive. I think that the Astana International Financial Centre, which will be located here, has very good development prospects. I also confirm that Swiss businesses have a great interest in deepening relations with Kazakhstan,” she said.

Speaking at the opening of the Swiss National Day at expo, Leuthard stressed the exhibition could become the basis for building a sustainable future.

“The world is changing. The environment, human values ​​and stability are a big challenge in the 21st century. EXPO 2017 under the Future Energy theme can become a fundamental pillar in building a sustainable future on the planet. More important is the interconnection and interdependence among energy supply, healthy ecology, humanitarian efforts and our duty to create social, political and economic stability. In this regard, the expo is important for the global community. It is the place where we can continue to disseminate our latest technologies and build on the stable cooperation that exists between Kazakhstan and Switzerland,” she said.

On her expo tour, Leuthard visited the Kazakh pavilion followed by the Swiss Flower Power pavilion. The latter is composed of four sections with interactive displays dedicated to the themes of energy efficiency, renewable energy and global water management. Switzerland’s research sector also has a platform in the shape of the so called Swissnex lab.

“The two territories are very similar. The Almaty region is the country’s agrarian region; more than 16 percent of the country’s total gross output is produced here. In terms of natural and climatic conditions, we are also similar; we have mountains and mountain lakes just like the canton of Ticino,” said Batalov.

He noted the memo will facilitate cooperation in agriculture and tourism. Kazakhstan, in his words, can learn a lot from Switzerland in these spheres.

“We also talked about their solar energy and wind power. We learned that they have a good level of processing solid domestic waste, which is very important for our region, because today our region has no complete cycle for processing solid domestic waste. I think they also have something to learn from us. It was they who suggested that it should be the Almaty region to sign an agreement with them,” he said.