ASTANA – The Sarbaz historical medieval battle became the highlight of the Khan Koryk international youth festival, which attracted thousands of spectators to Bayanaul National Park. Knights with historically accurate 30-40-kilogram armour and arms came from the capital, Almaty, Pavlodar, Kostanai and Bishkek to determine the strongest among them. 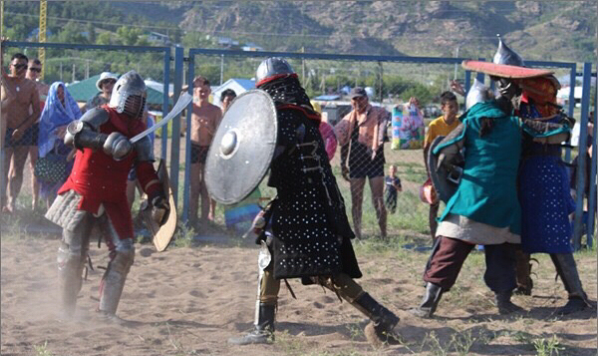 With mountains, fresh air, a refreshing lake, beautiful nature and historic background, Bayanaul was an ideal place for the medieval-themed event. The air temperature reached 35 degrees Celsius, yet the participants wore special clothes similar to quilted jackets or very heavy coats and armour. Even sitting in armour was extremely hot, but they had to battle.

Medieval fighters are fanatic about the re-enactment. They are usually tall, heavy, tough guys able to fight and wrestle, because an armoured knight weights 120-160 kilograms. The men are ready to travel several thousand kilometres by bus or train to any country and clash as soon as they arrive and their armour is unpacked, despite weariness, heat or cold. The Kyrgyz team travelled many hours from Bishkek and even didn’t ask for time to rest and eat.

Temir Tumen club chose the 15th century for the activity, because the Kazakh Khanate was established during the period. The club’s armoured knights presented the origin of Kazakh history and its people. Such warriors stood up for the right of the Kazakh people’s independence.

“My first big battle was in Russia. I was standing on grass and my teammates were standing close to me in formation, shoulder to shoulder. I saw numerous enemies in front of me, watching for every movement. Everything around was medieval. Even spectators had medieval clothes. I couldn’t believe that this was happening to me and I couldn’t believe that this was not real. I was sure that I was in the 15th century and I was going to fight to the death,” said Temir Tumen member Yerbolat Zhakupov about his first battle.

He finds the events exhilarating.

“All my teammates will agree with me. We pack our armour and arms, get on our bus and go somewhere to forget about everything: work, family, heavy traffic, Internet, news and problems. Everyday life becomes useless and uninteresting; when we are together, we are going to fight!” he noted. 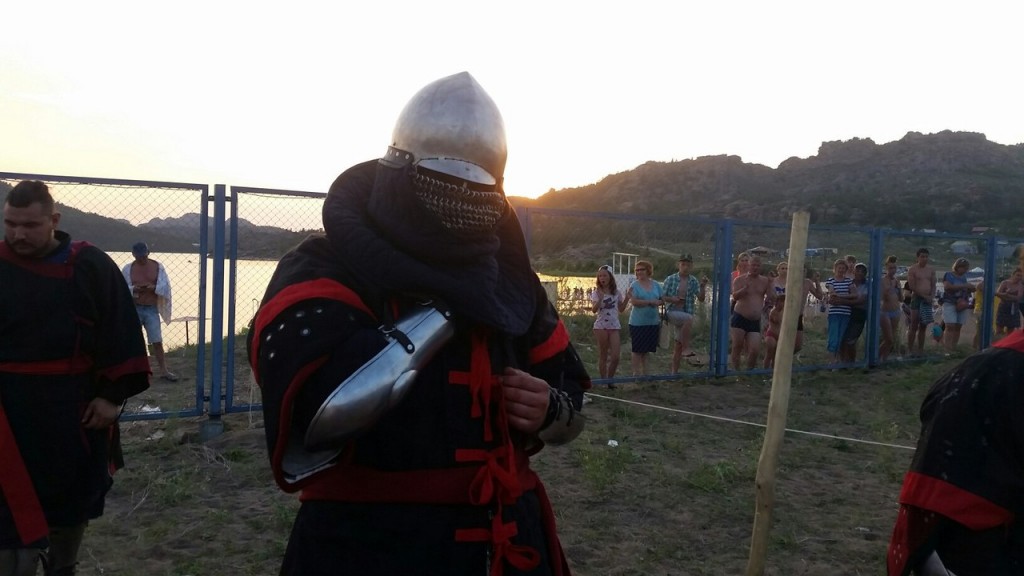 “People at such festivals are very friendly. Everybody hugs their opponent after the battle. We usually live in one place. We share our food and drink with each other. Every club tries to organise at least one event per year and invite other clubs to their region,” he added.

“It is never too late to stop fighting or refuse to participate in the battle and I don’t find it dishonourable. Look at social media! There are hundreds of ex-champions of historical medieval battles there seeking financial aid. They have serious health problems. Part of them became disabled! I have two little kids and I do help my old mom,” he said.

“I train myself every day at home and go to our club’s gym once a week. Every day I am preparing myself for such battles. I live anticipating one of them. It is my lifestyle: being a knight, a heavy armoured warrior who is ready to defend himself, his own family and country and face any challenges. This lifestyle really changes you, making you more confident, manful and kind,” he added.

Despite the cost and time from home, Chuguyevskiy has support for his hobby.

“I have to spend a lot of money on it, but my wife isn’t against it. She is proud of me and cheers for our club,” he said.

Medieval re-enactors face some of the same challenges as the real warriors.

“I had a sneaky feeling before this battle. My wife and I aren’t religious or superstitious people, but we saw some writings on the wall and were sure that something really bad would happen to me. The battles are quite dangerous and all of them end with different traumas for some of the participants. Fortunately, I came back home safe and sound. To be more exact, that was my first battle without any serious trauma,” said Zhakupov.

Every historical medieval fighter dreams of participating in the world championship Battle of Nations, but Kazakh teams currently compete only against their counterparts from Kyrgyzstan, Russia and Ukraine. As the last ones are the best in the world, the local teams have good opponents in defending the honour of their country.