By Staff Report in International on 8 August 2017

ASTANA – Due to the Russian National Day at EXPO 2017, a delegation from Chelyabinsk region led by its Governor Boris Dubrovskiy visited Kazakhstan National Space Centre. This meeting gave the parties new opportunities to identify new areas of cooperation. 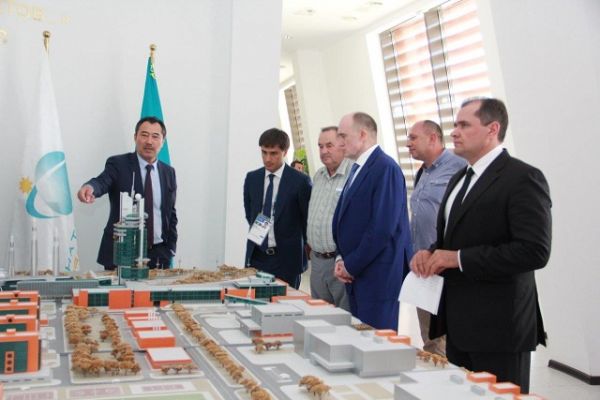 Kazakh Vice Minister of Defence and Aerospace Industry Marat Nurguzhin made a presentation on the main directions of the National Space Centre.

President of Kazakhstan Garysh Sapary Ergazy Nurgaliyev explained about projects implemented by the company and made an introduction to space technologies of the state. In particular, he discussed the operation of the Kazakh domestic space remote sensing system, the system of high-precision satellite navigation.

Also, Nurgaliyev reported on the creation of National Spatial Data Infrastructure in Kazakhstan and its use by state bodies, organisations and business.

The delegation inspected the building of the future Special Design and Technological Bureau with pilot production, which will be finished this year.

One of the Russian companies from the Chelyabinsk region – the Miass Medical Equipment Plant, which produces cleanroom complexes, has already cooperated with Kazakhstan space companies.

Kazakhstan Gharysh Sapary was established under the decree of Kazakh President Nursultan Nazarbayev in 2005 to develop and implement competitive space technologies.

The Earth remote sensing space system aims to prevent, monitor natural disasters and estimate their consequences. It is planned to use it for the exploration and production of minerals and energy resources, ecological monitoring, mapping, land use, forestry and agriculture.