By Aigerim Seisembayeva in International on 1 August 2017 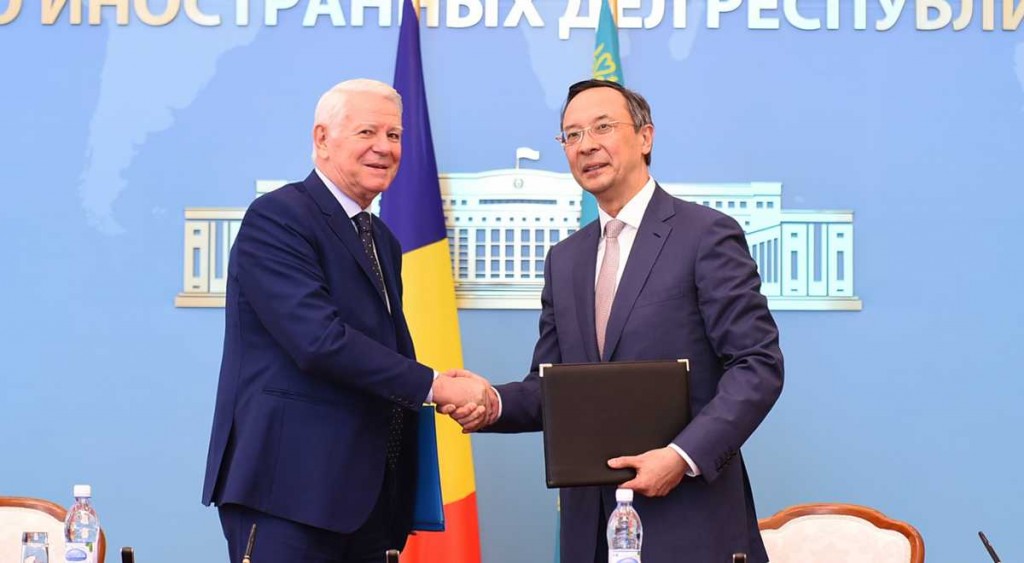 Meleșcanu began the trip by meeting with Kazakh Prime Minister Bakytzhan Sagintayev to discuss further developing trade and economic cooperation in energy, machine building, metallurgy, transport, logistics and light industry. They also reviewed implementing the agreements reached during the Kazakh-Romanian intergovernmental commission on trade, economic, scientific and technical cooperation. The commission’s next meeting is scheduled in Bucharest in October.

Kazakh Foreign Minister Kairat Abdrakhmanov received his Romanian counterpart the second day. The talks demonstrated the alignment of Kazakh and Romanian approaches on many international issues and their desire to strengthen ties in priority cooperation areas.

“Today, the priorities of our trade and economic relations are in the energy sector. We are looking forward to expanding and diversifying our trade. We are interested in the participation of Romanian businesses in our country’s economic modernisation programme, which is being carried out on the initiative of President Nursultan Nazarbayev,” said Abdrakhmanov.

He noted his nation prioritises developing relations with Bucharest as an important partner in Eastern Europe and the Balkans. The sides expressed readiness for close interaction on significant issues in the context of Kazakhstan’s current membership on the UN Security Council and Romania’s presidency of the Council of the European Union (EU) in 2019.

“We congratulate Kazakhstan on its election as a non-permanent member of the UN Security Council and hosting the EXPO 2017 international exhibition on the theme of Future Energy. These are the outstanding achievements of your country. Over 25 years of independence, Kazakhstan has become a respected member of the international community. Romania intends to strengthen political dialogue, economic cooperation and cultural ties with Kazakhstan,” said Meleșcanu.

He added the two countries’ diverse economies and trade should become a key component of cooperation.

According to Meleșcanu, Kazakhstan is the EU’s most advanced partner in Central Asia and the Romanian parliament recently ratified the on Enhanced Partnership and Cooperation Agreement between the EU and Kazakhstan.

“I am glad that my visit brought concrete results. We signed a bilateral document, a joint statement on the occasion of the 25th anniversary of the establishment of diplomatic relations, and today we will sign an agreement on cooperation between the Romanian Chamber of Commerce and the Atameken National Chamber of Entrepreneurs. Kazakhstan is Romania’s most important partner in Central Asia,” said Meleșcanu.

He then presented Abdrakhmanov with an official invitation to visit Romania.

After the talks, the Romanian delegation visited the expo to participate in its National Day. The event included a performance by pan flute master, musician, artist, poet and Knight of France, Belgium and Luxembourg Gheorghe Zamfir and folk dances performed by the Dacia Romanian Cultural Centre from Karaganda.

Meleșcanu also met with Kazakh Parliament Senate Deputy Chairperson Sergei Gromov and travelled to the Karaganda region, where he met with Akim (Governor) Yerlan Koshanov and visited the Dacia Romanian Cultural Centre and a memorial complex in the village of Spassk where Romanian World War II soldiers, taken prisoner during battles on the eastern front,  are buried.