By Zhanna Shayakhmetova in International on 28 August 2017 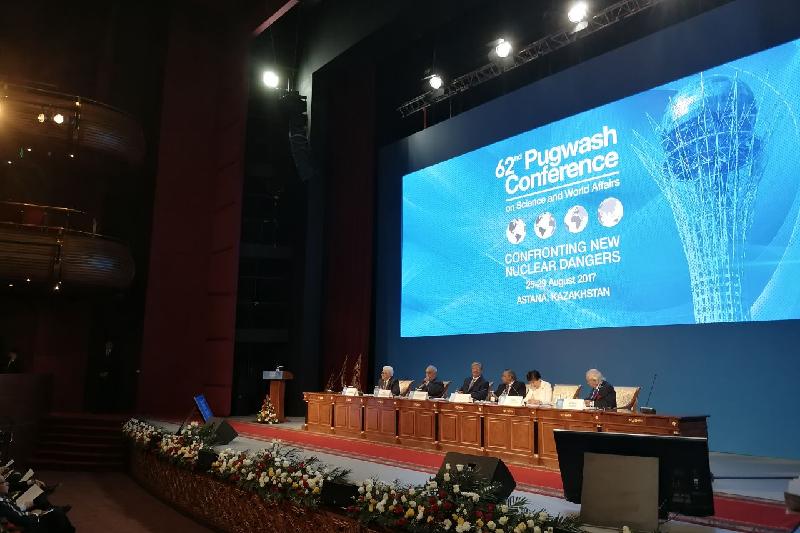 A short film with a deep, meaningful message featuring the Semipalatinsk nuclear test site, its victims and Kazakhstan’s peace actions received a big round of applause at the opening ceremony. It also featured The ATOM Project, an international campaign seeking to galvanise global public support against nuclear weapons testing, and its Honorary Ambassador and armless artist Karipbek Kuyukov.

“The documentary expresses more eloquently than I can the history of the nuclear age and efforts being made by both the nation of Kazakhstan and [President] Nursultan Nazarbayev, as well as Pugwash,” said Pugwash President Jayantha Dhanapala.

He noted the Kazakh people and Kuyukov capture Nazarbayev’s principles, a man who has done so much for nuclear disarmament including the creation, together with other four regional states, of a nuclear-weapon-free zone centre in Central Asia.

“We have seen Kazakhstan converted into a dialogue platform not only for nuclear disarmament, but also for conflicts like the Syrian conflict, with the Astana Process contributing towards the search for a political solution… The inauguration of the LEU Bank is a great tribute to the way in which Kazakhstan has contributed towards the strengthening of the Nuclear Non-Proliferation Treaty, in particular the strengthening of two pillars of the peaceful uses of nuclear energy and non-proliferation,” he said.

In his keynote remarks, Tokayev noted the country has been a staunch advocate of the Central Asian Nuclear-Weapon-Free Zone treaty signed in Semipalatinsk in 2006.

“The establishment of the IAEA LEU Bank on the Kazakh territory is a vital contribution towards strengthening the non-proliferation regime,” he added.

As a non-permanent member of the United Nations (UN) Security Council in 2017-2018, Kazakhstan has been focusing on nuclear disarmament issues.

“We have been promoting initiatives voiced by President Nursultan Nazarbayev, that is to establish a global anti-nuclear movement and to build a nuclear-weapon-free world by 2045, the year when the UN will celebrate its centennial anniversary. We are convinced that these actions to achieve nuclear zero are indispensable,” he noted.

Tokayev added Kazakhstan calls upon all states to step up international efforts to strengthen the regime of the Non-Proliferation of Nuclear Weapons treaty and to bring into force the Comprehensive Nuclear Test-Ban Treaty (CTBT).

“A fair exercise of rights of all states to peacefully use nuclear energy under the strict verification by the IAEA is crucial to promoting global nuclear security. The nuclear deal on Iran has raised the prospects of peace and stability in the Middle East. We are confident that the LEU Bank will ensure an assured supply of nuclear fuel to boost the nuclear power industry,” he said.

Cotta-Ramusino added “the idea of having an international nuclear fuel centre is an important one, something we would like to push and promote all over the world.”

“We need to have international cooperation for the production of nuclear fuel for nuclear energy plans in a way that we have reciprocal control and basically a check that none of these nuclear fuels and materials can be used for military purposes,” he said.

UN Under-Secretary-General and High Representative for Disarmament Affairs Izumi Nakamitsu spoke about the dangers that thousands of nuclear weapons can cause.

“We face a range of new challenges to the global disarmament and non-proliferation regime from deteriorating security conditions and shifting global balances due to the new technologies that are rapidly overhauling the status quo of the world economy, society and security,” she said.

Nakamitsu reconfirmed the UN’s united and solid commitment to nuclear disarmament and engaging in inclusive dialogue necessary to make it happen.

Comprehensive Nuclear-Test-Ban Treaty Organisation (CTBTO) Executive Secretary Lassina Zerbo emphasised a number of challenges facing the international community making the need for dialogue and discussion among practitioners, the academic community and international organisations more critical than ever. He stressed the CTBTO’s role in non-proliferation and disarmament.

“I have experience confronting one particular type of nuclear danger – the danger posed by nuclear testing. It is hard and dangerous in [terms of] destabilising impacts on global security and terrible effects on human health and environment. The absence of wartime does not mean the absence of victims and that leads me to the lesson learned by Kazakhstan’s experience of nuclear testing. Kazakhstan is a vivid example of the risk posed by nuclear tests,” he said.

“I think the Comprehensive Test Ban Treaty flows in Kazakhstan’s blood. In his manifesto, President Nazarbayev rightly points out that the effects of nuclear weapons and nuclear weapon testing cannot be contained in time or space. These are global issues which require global cooperation,” he added.

Zerbo noted the importance of trust at the regional and international levels, adding that making the world free of nuclear tests is achievable.

“It needs strong political will and preference for multilateral and collective security. We can’t ignore the collective ban treaty when we talk about non-proliferation and disarmament,” he said.

“The CTBTO is doing important work by giving states confidence that the global moratorium against nuclear testing is being upheld and that no nuclear test or explosion will go undetected. To finish what we started, we need the ratification of the treaty by eight remaining countries. These are China, the U.S., Egypt, Iran and Israel, which are countries that need to ratify the treaty, and India, Pakistan and North Korea that have never signed it,” he said.

The issues of nuclear disarmament and the UN negotiation process to prohibit nuclear weapons, energy and regional security and the future of civilian nuclear energy were also on the agenda of the five-day conference.