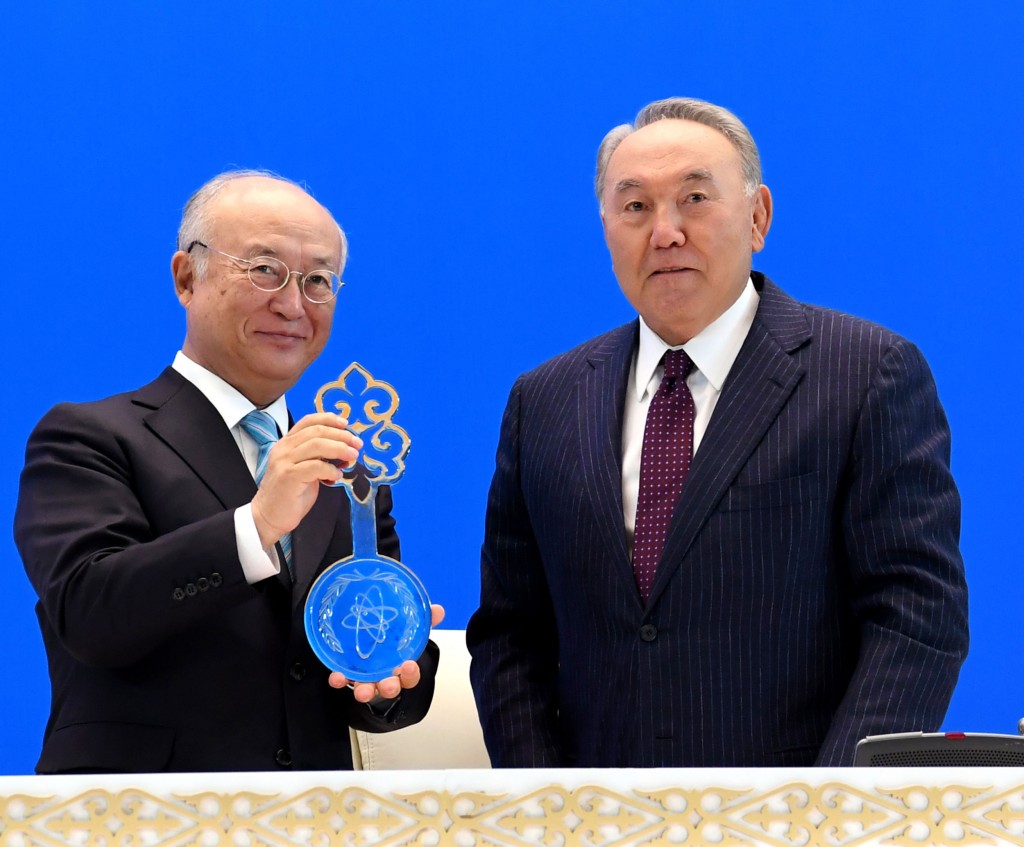 Speaking at the bank’s elaborate launch ceremony in Astana’s newly opened Hilton Hotel, Kazakhstan President Nursultan Nazarbayev highlighted that during the years of independence, his country has progressed from the holder of the world’s fourth nuclear arsenal to a leader in global non-proliferation. He said that the opening of the bank is the result of many years of work and is a very important event for the state.

“As a state possessing large volumes of uranium-containing raw materials, we contribute to the peaceful use of atomic energy,” he said at the ceremony.

“The LEU Bank will serve as a last-resort mechanism to provide confidence to countries that they will be able to obtain LEU for the manufacture of fuel for nuclear power plants in the event of an unforeseen, non-commercial disruption to their supplies,” IAEA Director General Yukiya Amano, who addressed the ceremony as well, said on Aug. 28.

The LEU Bank is based at the Ulba Metallurgical Plant (UMP) in Ust-Kamenogorsk, in the East Kazakhstan region. The facility will store nuclear fuel and sell it to IAEA members. The bank will store up to 90 tonnes of low-enriched uranium, sufficient to run a 1,000 MW light water reactor or give power to a large city for three years.

President Nazarbayev said that by providing the IAEA the possibility to establish the LEU Bank, Kazakhstan is helping to strengthen the non-proliferation regime and creating a unique mechanism for the safe supply of nuclear fuel. He emphasised that the bank will function under the full control of the IAEA and will be in its official legal possession.

“We are the largest producer of uranium and are ready to play an important role in the world energy. Also, Kazakhstan is in the mainstream of a global green trend. That is why we are holding the EXPO 2017 international exhibition, dedicated to the energy of the future, in Astana,” President Nazarbayev further said.

“I am confident that the IAEA LEU Bank will make a valuable contribution to international efforts to ensure the availability of fuel for nuclear power plants,” Amano said at the event.

The IAEA plans to start buying uranium soon and to start shipping it to the bank in 2018.

The IAEA is the world’s central intergovernmental organisation, established for scientific and technical cooperation in the nuclear field. The IAEA seeks safe, secure and peaceful uses of nuclear technologies and science.

The bank is funded by the U.S., the European Union, Kuwait, Norway, the United Arab Emirates, and the Washington-based Nuclear Threat Initiative, an NGO which jump-started the process of its establishment with an offer of $50 million as seed money provided by billionaire Warren Buffet.

In 2009, Kazakhstan proposed to host the LEU bank in Kazakhstan under the IAEA. An agreement was signed with the IAEA on Aug. 27, 2015. Kazakhstan is a leading producer of uranium, boasting more than 15 percent of global uranium reserves.

Russia established its own LEU bank in 2010, but the LEU bank in Kazakhstan is the first to be fully owned and managed by the IAEA.