By Yuri Kirinitsiyanov in Op-Ed on 7 August 2017

As a result of the recent elections in Iran, Hassan Rouhani was re-elected the President for another four years. How will this affect the nation, which is one of Kazakhstan’s most important partners in Asia? The topic was presented to Dr. Sanat Kushkumbayev, Deputy Director of the Kazakhstan Institute for Strategic Studies. 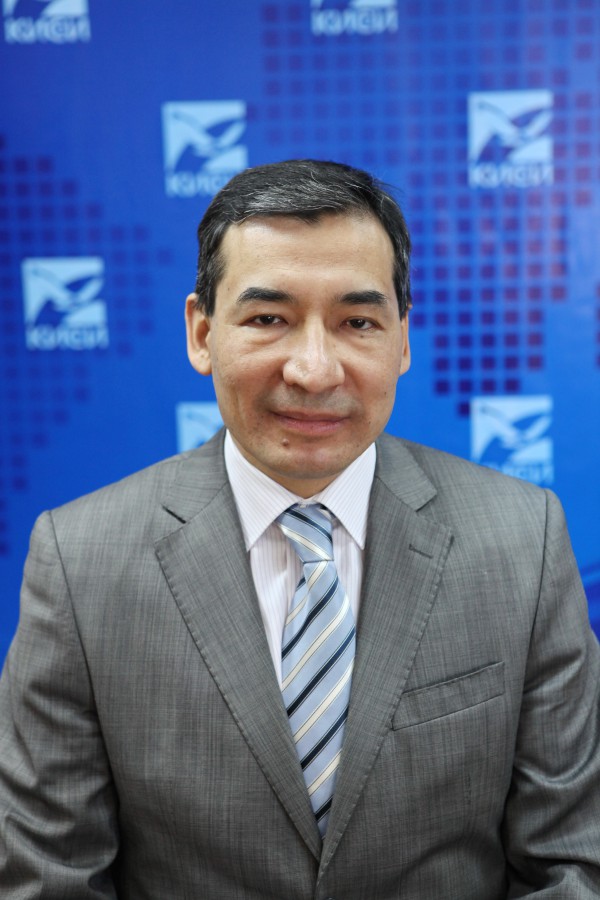 First of all, could you tell us about the election campaign itself and the voting results?

It should be pointed out from the outset that the current president secured a firm majority. Last time, he received a little more than 50 percent of the vote; now, he has 57 percent and he already proved in the first round that the majority of voters stood behind him. One of the features of the current Presidential campaign is that Mahmoud Ahmadinejad, the former president of Iran, was not allowed to run for President. The Supervisory Board did not support his candidacy and this is a prerequisite for participating in the election. Unlike Ahmadinejad, Rouhani is considered a moderate politician, prone to gradual reforms of the Iranian society. That is, there have been noticeable changes in Iranian sentiment. And this, perhaps, is the most important result of the presidential elections in Iran. I will note that the most important rival of Rouhani was Ayatollah Ebrahim Raisi, who is considered a more conservative politician. He is an experienced, charismatic politician who is popular among conservative voters. He was the candidate from the Combatant Clergy Association and was supported by a key coalition of Iranian conservatives, the Popular Front of Islamic Revolution Forces. It is a serious political force.

We cannot overlook the terrible terrorist attacks in Iran.

The explosions occurred in the Parliament, which is one of the key centres of power. Gunmen attacked the mausoleum of Ayatollah Khomeini, the leader of the Islamic Revolution. He ran the country from 1979 to 1988. Khomeini’s mausoleum is a sacred place for the Iranians. According to official data, 13 people died and 42 sustained various injuries.

This is a case when you can say “Nothing is sacred to these people!” It is not a very good beginning of the second presidential term. Will this tragedy affect a new policy?

The purpose of terrorist attacks is clearly to shake the country and force out concessions from its leaders. But this terrible story will not affect the state policy or the position of the country in a global and regional context. It is obvious that the Iranian leadership will not succumb to the threats of terrorists. Observers, including Western ones, note that these suicide attacks are the first in the history of the Islamic Republic since its inception. That is, since 1979, and the Iranian society has shown a high degree of resistance to such attacks.

Many experts say these terrorist attacks were predictable. Iranian volunteers are fighting in Syria for President Assad against ISIS. Their troops are in Yemen protecting their Shia brothers. Are we witnessing the next round of Sunni and Shia showdown? Since ISIS, first of all, are the Sunnis and only then terrorists and extremists who behead their “opponents.”

I absolutely disagree with this point of view. It is not a Shia-Sunni confrontation, since the Sunnis are also murdered by ISIS. This is not a religious war, but a political confrontation. Bashar al-Assad is not a Sunni nor a Shia, but an Alawi. He is the leader of the secular regime and his closest ally is the Islamic Republic of Iran. Therefore, their fight against ISIS does not fit into the religious context. Let us not deny: many Shias of the Middle East support the Shia Iran. But this does not in any way mean that the Iranians fight for fellow believers only because of religious reasons. The Palestinian movement Hamas is essentially Sunni, but a close partner of Iran. Therefore, everything is subtle here. By the way, the terrorist attackers were Iranian citizens who joined ISIS. You have to be extremely careful when assessing the situation in this country.

You have convincingly stated your point of view. I will add that Tehran 2017 does not fit into the outlook of the American President, who constantly surprises us. Let me remind you: during his visit to Saudi Arabia, Donald Trump called Iran a terrorist state. This statement is illogical. It is clear that Iran’s relations with the transatlantic power have worsened. Will this affect the situation in Central Asia?

This will surely not make the world and our region, in particular, more stable. The anti-Iran narrative and its escalation are counterproductive on all sides, but especially in the case of the Middle East. ISIS claimed responsibility for the terrorist attacks in Tehran and it is clear that Iran is at the forefront of the fight against this terrorist organisation. The Americans have created an anti-ISIS coalition and are carrying out military operations in Iraq and Syria. But at the same time they stubbornly ignore the country, which actively opposes ISIS. Iran is a serious, influential political player in the Middle East. The sooner America admits this, the better.

Let us close the topic of terrorism, although it prevails today. What has changed in Kazakh-Iranian relations during these four years? For Iran, our country is not a priority. Their bane is the relationship with the United States. Europe and the Russian vector; the situations in Syria and Yemen are important to the Iranians.

Iran has a very positive attitude towards Central Asia and Kazakhstan in particular. Progress has been made in the negotiations on the status of the Caspian Sea and although the final decision is yet to be made, things are moving forward. Negotiations are underway and this is the most important thing today. Iran demonstrates a constructive position which inspires cautious optimism. This year, the 50th anniversary meeting of the Ad Hoc Working Group (AWG) on the status of the Caspian Sea will be held in Tehran. The bottom line is that Iran and other Caspian countries are essentially committed to the diplomatic way of resolving the issue through dialogue.

At the same time, Iran’s geopolitical interests are now concentrated in the Arab world, in particular, in Iraq, Syria and Yemen. Iran is certainly interested in good-neighbourly relations with Central Asia. The region is the strategic rear for Tehran. In this sense, the visits of Kazakh President Nursultan Nazarbayev to Tehran and President Hassan Rouhani to Astana have continued and enhanced the traditions of good-neighbourliness and pragmatism. New trade agreements were signed. In particular, the potential of the Kazakhstan-Turkmenistan-Iran Railway is to be unlocked. The trunk railway, built along the eastern shore of the Caspian Sea, will play a role in commercial transactions.

It is clear that after lifting sanctions on Iran, our trade turnover has a chance to grow. Now, nothing prevents Iran from using international financial systems. Oil transactions will be resumed and the sales of Kazakh grain to Iran will increase.

Experts predicted Iran would invest in the development of the oil industry of our country. But, obviously, there were more important things to think about…

Iran was severely affected by isolation. Therefore, the Islamic Republic spends its financial resources very carefully, and private business does not like taking risks. In addition, the Kazakh oil market is extremely competitive. We are open to the whole world. Such oil giants as Chinese and American companies “crossed swords.” In particular, the Chinese oil business enjoys an almost unlimited support of its state. Therefore, it will not be easy for the Iranians to win in the “value-for-money” ratio. The door for Iranian business is open. But the question is, will they be able to make an offer we cannot refuse?

Good-neighbourly relations are the hallmark of diplomats. But do they have an impact on the real state of affairs? Turnover, for example?

One should not expect quantum leaps here. It will require hard systematic work. You are talking about “hallmarks.” And they do reflect the true state of affairs! Good-neighbourly relations are the foundation, without which you cannot construct a single building. And the Iranians appreciate the undeniable fact that even in difficult times of international sanctions, Kazakhstan tried to maintain trade relations [with them] although [Kazakhstan] was suffering because of the global financial crisis and its purchasing power plummeted. I will give an example. Iran bought our oil for its needs through the Caspian Sea, and then shipped equivalent raw materials from its ports in the Gulf. During the sanctions, this process ceased. International banks were afraid to make payments. Now we need to restore many things, in particular the supply chain, to reconnect with old customers and find new ones.

It is difficult to talk about Iran and not to mention its nuclear programme. After visits by representatives of the International Atomic Energy Agency, the world believed in the peaceful aspirations of the Iranians. Or has the American point of view now taken over, according to which we must not trust insidious Persians under any circumstances?

I believe that even the most aggressive media outlets today have become convinced of the groundlessness of their accusations. Hysteria in relation to this country has become less evident. An agreement on the Iranian nuclear programme was signed on July 14, 2015. The guarantors of the agreement are four permanent members of the Security Council: the United Kingdom, the United States, Russia and France, plus Germany and the European Union. This was a comprehensive plan of action that Iran consistently implements. There are no complaints against it. Ironically, America, despite the strident anti-Iranian discourse, seems reluctant to withdraw from this treaty. Trump accuses Iran of supporting terrorism, but he cannot press any charges against his opponents. This is not a technical or a scientific problem, but a purely political one.

Many in the world are concerned about Iranian missile programmes …

Iran’s missile technology is not directly related to nuclear weapons. The missiles do not fall under the agreement of July 14, 2015. This is a matter of national defence. By the way, even if Trump wants to break the hard-won agreement of the P5+1 with Iran, it will not be easy. He will have to negotiate with his own NATO allies. And this process is anything but simple…

Your forecast: how will Kazakh-Iranian relations develop in the near future, say until 2021?

I think that our good relations, established thanks to the politicians of the two countries, including Rouhani, are a valid argument in favour of their further development, as we have already said. Iran was as an observer at the recent [Shanghai Cooperation Organisation] SCO summit in Astana. The delegation was headed by Foreign Minister Javad Zarif. He was received by President of Kazakhstan Nursultan Nazarbayev and held a series of bilateral talks with his colleagues, including those from Kazakhstan. Iran is mindful of the countries of Central Asia. It is no secret that Iran wants to join the SCO. This is a strategic issue for Tehran. But there is no solidarity among the SCO members. Tajikistan objects. I would not like to comment on Tajik-Iranian relations. Hopefully, both countries will resolve their bilateral issues. Russia actively promotes Iran’s membership. As for Kazakhstan, our country supports Iran’s membership in the SCO. This corresponds to our multi-vector foreign policy.

This interview was first published in the Argumenty i Fakty Kazakhstan newspaper and is translated and reprinted with permission.