ASTANA – Five artists from the United Kingdom, Kyrgyzstan, Russia and Ukraine are creating monumental and decorative art in Almaty as part of International Mural Fest, giving them the chance to splash their inner colours out.

Britain’s Fanakapan, known for his works in large cities such as New York, Los Angeles, Miami, Berlin, London and Paris, was the first to display his talents, reported tengrinews.kz. He decorated a house in the Medeu district with the gigantic letters Q and Z shaped like helium balls after learning Kazakhstan could soon switch to the Latin alphabet. 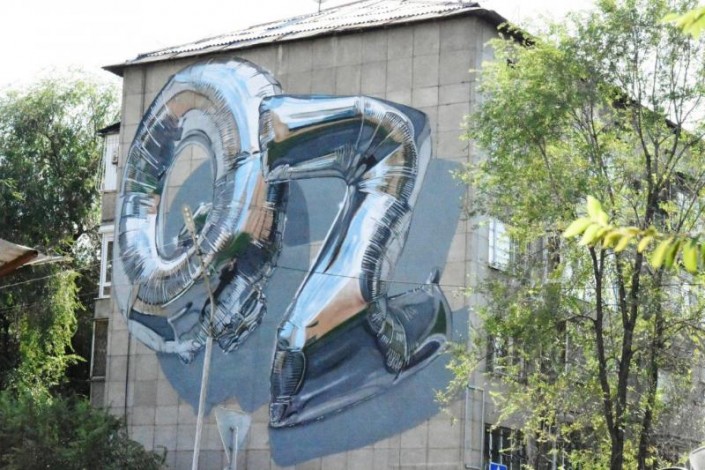 Andrei Palval, a Ukrainian street artist, painted one of the apartment complexes in the

Bostandyk district. He devoted his work to the berkutchi, the Kazakh national falcon hunters, noting the art demonstrates his passion for painting people and birds. 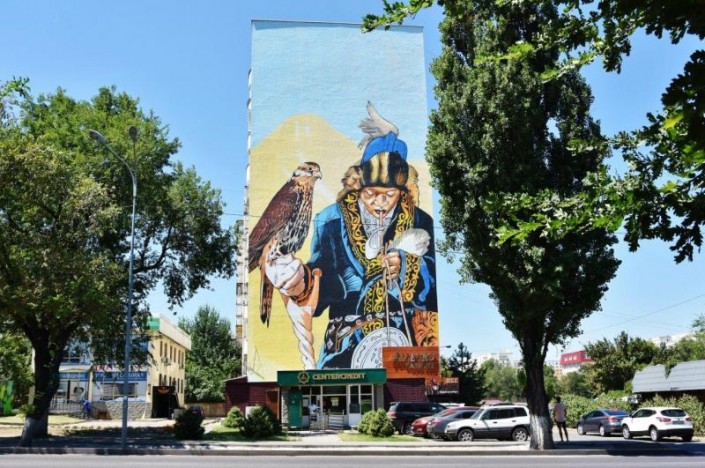 “In his work, Palval managed to combine these two images while retaining the Asian flavour,” wrote the media.

Russian artist Georgiy Kurinov, also known as GOOZE, was assigned to Almaty’s Alatau district. He said he enjoys when his works are thoroughly scrutinised and suggest new ideas, making the onlookers reflect. Each individual can visualise something for him or herself.

Kurinov, who defends protecting nature and wildlife, portrayed a sea turtle, which he said is an ancient symbol of the universe. He enciphered the phrase “Energy of the Earth” in Russian on the reptile’s shell and fin and portrayed an eco-house of the future with solar batteries and wind generators on the tree above it. A small hydroelectric power station is pictured in the middle. 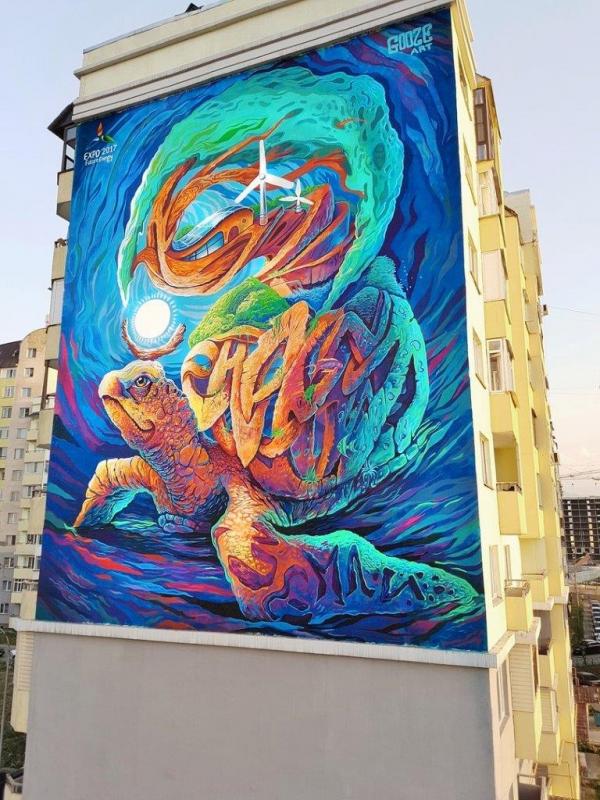 Sergey Keller and Dmitry Petrovsky, the DOXA team from Kyrgyzstan, are participating in their second festival. They were assigned to the Turksib district.

The Kyrgyz duo depicted a swallow on one of the houses near the airport and their work has become the locals’ special favourite. The apricot growing in front of the building is a reminder of spring, new life and dreams. 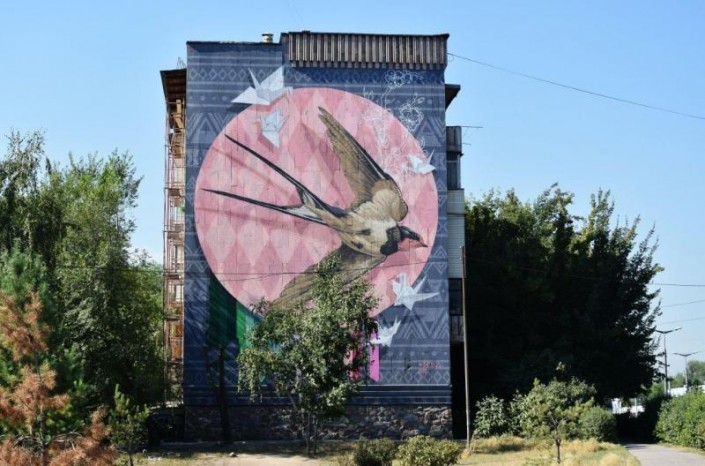 The work of young Kazakh artist Ali Zakir, a member of the Tigrohaud Crew team, appears on a residential building in the Auezov district near Sputnik shopping mall and entertainment centre.

“The idea came to me when I was working on the theme of the Aral Sea and I drew boats and ships. This work is not only about the ecological problem of the Aral Sea, but also about the transience of time; these ships sail not just in water, but in air, our thoughts and fantasies,” the artist said.

In the Almalinsky district at the intersection of Zheltoksan Street and Zhibek Zholy Avenue, one can see the work of another Kazakh artist, Mukhit Dulu. He showcased the image of a Kazakh girl in a saukele, the national wedding headgear, and the work is rich in details and national ornaments.

The last piece will be completed on a 500-square metre wall in the Nauryzbai district, which  will be painted by 100 children and teachers of the Kasteyev School of Fine Arts. The project will be carried out as part of the “Favourite children to the beloved city” campaign held annually in Almaty. In the future, Mural Fest is planned for other cities throughout Kazakhstan, according to the organisers.