By Aigerim Seisembayeva in International on 15 August 2017 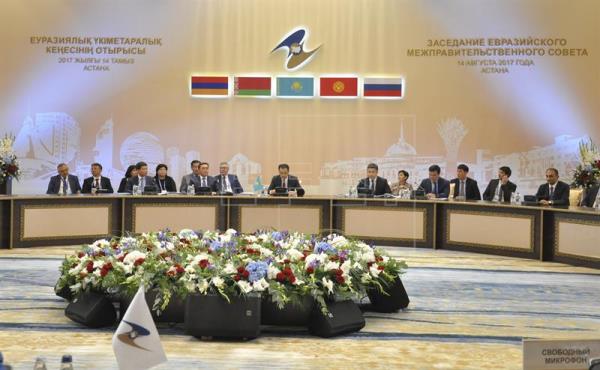 The meeting was conducted during EXPO 2017 and included the heads of government of Kazakhstan, Russia, Belarus, Kyrgyzstan and Armenia. It was the council’s third meeting this year.

Kazakh Prime Minister Bakytzhan Sagintayev briefed the gathering on the EAEU’s work to remove more than 60 barriers within the EAEU. He noted trade growth within the EAEU and with non-member countries.

Meeting participants discussed implementing the EAEU digital agenda, using trading platforms in the electrical power industry and the traceability of goods. They were also briefed on the Eurasian Economic Commission’s efforts to create a free-trade zone with Iran.

Participants were also updated on a draft agreement allowing EAEU country citizens to work in any EAEU country without losing seniority or pensions and an effort to accept driver’s licenses within the EAEU from any EAEU state. They also discussed creating an air accident investigation commission and reviewed a summary of goods recently imported into the EAEU.

Agreements were signed concerning the issues discussed, though no details were provided.

The council will meet next in Yerevan, Armenia, in October.

President Nursultan Nazarbayev also met with the government heads at the Akorda residence prior to the council meeting.

“The heads of government have a good opportunity to visit their national pavilions, Kazakhstan’s expositions and those of other countries. I would like to note that it’s the third year of the Eurasian Economic Union’s work, and it has been accompanied with the difficult situation both in the world and in the national economies of the EAEU member states. The main factor is the creation of a common market, a single economic structure,” said Nazarbayev, adding that economic growth will increase trade turnover and improve relations between EAEU member states.

“I think that we have been moving in the right direction all this time. Despite the existing issues, we need to strengthen the EAEU. Now we have the task of ensuring that our internal issues, the relations between our countries continue developing in the future. The main role here is assigned to the governments: the solution of economic problems, the settlement of issues of interaction between states,” Nazarbayev said.