Bayanaul – land of legend and nature

ASTANA – With its numerous lakes and mountains, Bayanaul has a reputation of mesmerizing and absolutely stunning scenery. The area is also famous, however, for many the legends surrounding it. 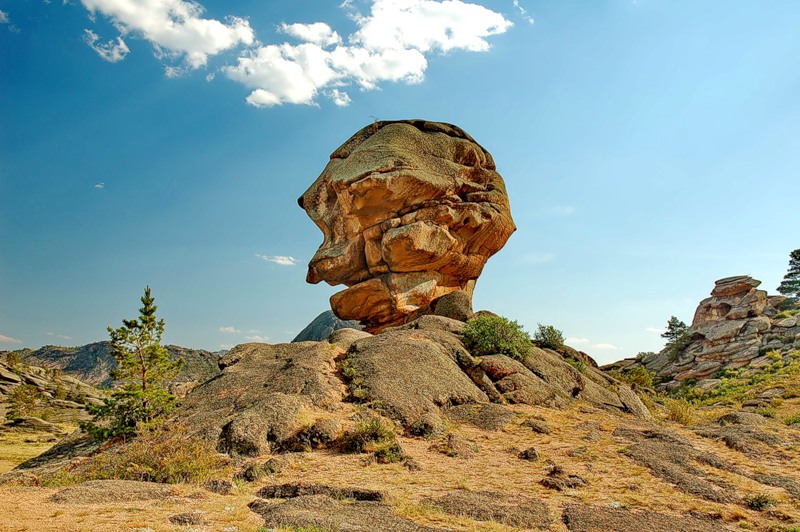 What to do in Bayanaul

Bayanaul National Park is located in the small village of the same name about 450 kilometres from Astana. It is a picture-perfect collection of shimmering lakes, natural springs, forest-filled mountains and unique caves.

Local guides recommend starting tours at Zhayau Musa Monument near Zhasybai Lake. The statue hails the Kazakh poet and composer who lived at the turn of the 20th century. The trails can be steep and even dangerous. Hikers must be cautious to check the rocks before stepping on them and make sure to hold branches that will not hit anyone walking behind them. The walk continues along fire roads cut into the forest where black alder woods, which are among Kazakhstan’s protected tree species, are visible. Trekking upward, climbers follow clear streams with sparkling yellow creek beds which make people think they have discovered gold. It is actually copper pyrites common to the area. The streams’ waters are considered healthy and many bring empty bottles to fill and take home.

The Witches Gorge is a series of twisted trees, whose waters are thought to have a curative effect. It is the pass where Kazakh batyrs (warriors) led by Zhasybai fought the Dzhungars. Struck down in battle, the brave, dying warrior asked to be buried at the pass so visitors could simultaneously see Lake Zhasybai and Lake Sabyndykol and enjoy the beautiful scenery.

The hike along the gorge takes walkers to the black alder woods and a meadow from which they can scramble up a final climb for a view of Akbet Mountain. At 1,026 metres, it is the tallest peak in Bayanaul National Park. The hike then descends along a trail via Echo Valley for a glimpse of the tops of the black alder forests. The 3.5-kilometre hike takes about an hour and a-half.

While in Bayanaul National Park, visitors may also want to explore Aulietas Cave, which is believed to hold sacred rocks. Autlietas means “Sacred Rock” in Kazakh and legend has it that if one makes a wish, touches the cave’s rocks and walks away without looking back, the wish will come true.

Those in great shape can challenge the three and a-half hour climb to the top of Akbet Mountain, where hikers can see the region’s three main lakes – Zhasybai, Sabyndykol, and Toraigyr, the latter where its namesake, the famous Kazakh poet, is buried. The view overlooks three unique rock outcroppings – Saimantas, Naizatas and Kempirtas.

Bayanaul is also the place for those who enjoy swimming and hiking. About 450 kilometres south-east of Astana, Bayanaul boasts a number of scenic lakes, breathtaking natural springs and forest-filled mountains for trekking and exploring nature. 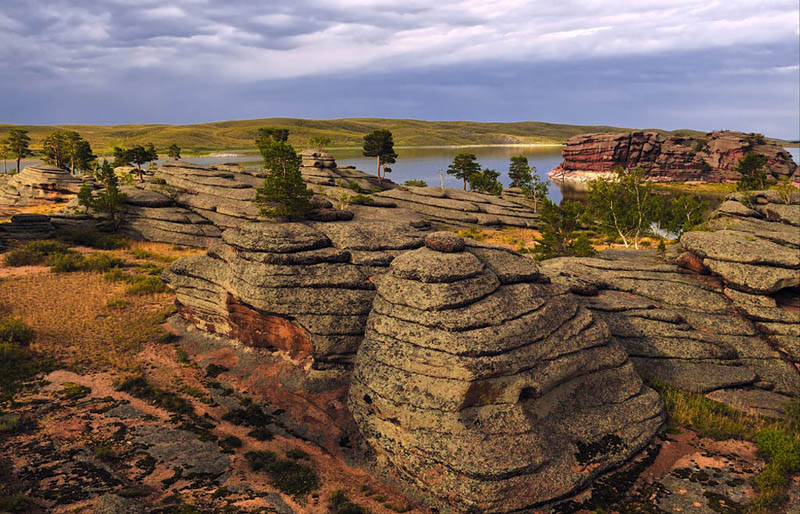 Legend has it that the word Bayanaul is of Mongol-Turkic origin; in Mongolian, Bayan-ola means “prosperous hill,” a place of rich and blessed grazing mountains. Other legends indicate the indigenous population that once lived there, the name of the mountain and the idea the village are connected with the name of Bayan-Sulu (sulu in Kazakh means “beauty”), the heroine of the popular epic poem Kozy-Korpesh and Bayan-Sulu.

Bayan was especially fond of the Kazylyk Mountains, where there were many karkars, birds with beautiful plumage. She made a lovely headdress with its feathers decorated by a sultan (karkara); therefore, the mountains were named Karkaraly (black heron mountains).

In the Kokshetau Mountains, she found a tree that emitted a melodious sound. Bayan-Sulu ordered a dombra (a traditional Kazakh lute-like stringed musical instrument) made from it; thus, one of the mountains was named Dombraly. The area had many precious stones which she used to make gorgeous beads (monshak) and the mountains were named Monshakty (beaded).

The rich Karabai family repeatedly stopped in the Bayanaul Mountain valleys, a fact noted in variations of numerous legends.

After Bayan-Sulu’s tragic death, people from nearby places grieved for a long time and told stories about her life. They recalled the day she dropped soap into the lake, turning the water very soft and ultimately changing its name to Sabyndykol (soapy lake).

According to various versions of different legends, the mountains were once called Bayantau (mountains of Bayan). People also named one peak Tarak (comb), where she allegedly dropped a comb.

Eloquent storytellers named the highest mountain Akbet (white faced), while others were called Naizatas (stone spear) and Atbasy (horsehead) and a rock was named Kempirtas (the old woman stone), as it is remarkably similar to an old woman’s head. Some other rock names include such words as hat, loaf of bread, fish and dove.