By Dmitry Lee in International on 28 August 2017

ASTANA – As Kazakhstan and the International Atomic Energy Agency (IAEA) launch the Low Enriched Uranium (LEU) bank in Ust-Kamenogorsk under the auspices of the Vienna-based organisation Aug. 29, its famous anti-nuclear weapons movement – The ATOM Project – has joined scholars and scientists of the world-renowned Pugwash movement. 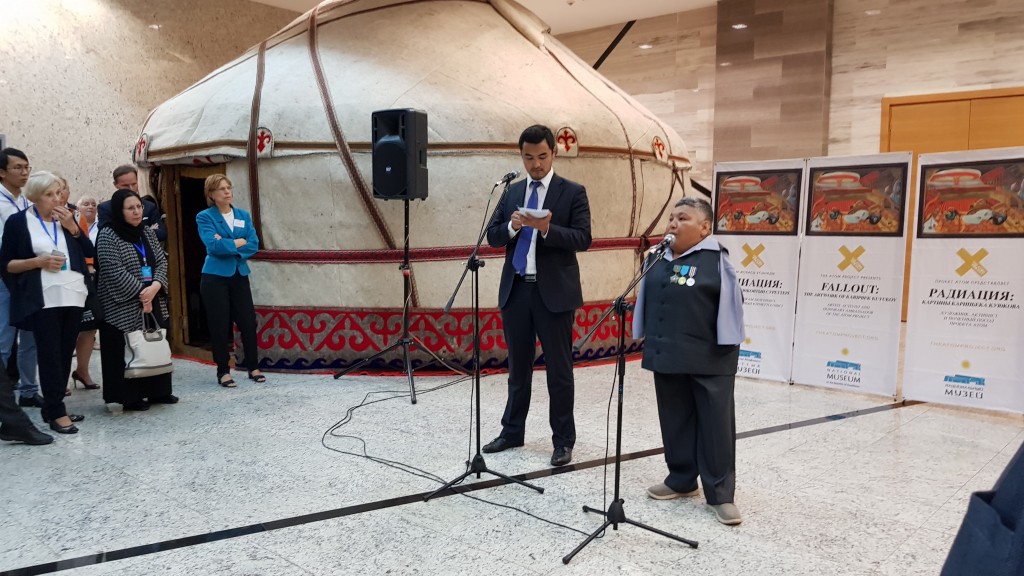 This year, Kazakhstan hosted the 62nd Pugwash Conference on Science and World Affairs from Aug. 25-29 in the country’s capital.

On the eve of the UN International Day against Nuclear Tests on Aug. 29, the Kazakh capital has gathered hundreds of international scholars and nuclear non-proliferation and disarmament experts from around the world.

The announcement of the Ulba Metallurgical Plant in Ust-Kamenogorsk as the location of the soon to be launched IAEA LEU bank by Chairman of the Senate of the Kazakh Parliament Kassym-Jomart Tokayev in the morning of Aug. 25, made the headlines of local media right away.

Kazakhstan’s efforts in nuclear weapons non-proliferation were also exhibited through paintings by the ATOM Project Honorary Ambassador Karipbek Kuyukov on the sidelines of the conference at the National Museum – where The ATOM Project held its reception later in the evening.

The online petition against nuclear weapons proliferation – The ATOM Project – launched in 2012 by the President of Kazakhstan, has amassed more than 300,000 signatures from all over the world in support of the effort to rid the world of nuclear weapons.

Kuyukov’s exhibition, titled “Fallout,” was on display for the conference participants as well, and Kuyukov, himself, was present to comment on his works.

Kazakhstan’s Deputy Foreign Minister Roman Vassilenko, as a guest of honour, highlighted the importance of the LEU bank and said it was a “critical milestone in global non-proliferation,” during his remarks at the reception.

“We firmly believe that it is also a vehicle that will facilitate peaceful nuclear cooperation, an objective Kazakhstan and President Nazarbayev have worked tirelessly towards,” he noted.

“The selection of Kazakhstan as the site of the first ever IAEA LEU bank is indeed a vote of high confidence and recognition of our country as a leader in non-proliferation and nuclear security and a responsible and reliable international partner with long-standing experience in successful handling of nuclear materials,” he said.

Vassilenko noted the symbolism of the conference as it was taking place on the eve of the United Nations International Day against Nuclear Tests, which marks the day in 1991 – Aug. 29 – when President Nursultan Nazarbayev made a decision to close the infamous Semipalatinsk nuclear test site in East Kazakhstan, where 456 Soviet nuclear tests were conducted, he said.

The Pugwash movement and The ATOM Project, according to the deputy foreign minister, share a common mission. “Karipbek Kuyukov, through his paintings, and the members of the Pugwash movement, through the wisdom and experience of many years’ work on disarmament, have never wavered in their vision and in their pursuit of achieving the goal of a world without nuclear weapons.”

The first Pugwash Conference was held in 1957 at a time when the United States and former Soviet Union were headed down a perilous path – amassing tens of thousands of nuclear arms. Since that first conference in a small Canadian village to this day, Pugwash has been a relentless champion of disarmament, working, through informed discussions of experts, scholars and policymakers, to prevent nuclear proliferation and address conflicts, according to Vassilenko.

Taking the floor, Kuyukov reached out to the hearts of the mostly foreign audience by appealing to the whole world on behalf of all the victims of nuclear weapons exposure – the people who lived near the Semipalatinsk nuclear test site, the Japanese who have suffered in Hiroshima and Nagasaki, the aboriginals who lived in the state of Nevada – to stop the nuclear weapons race.

His remarks drew enthusiastic response from the audience with one elderly member of the Pugwash conference calling him Kuyukov a “voice of the people and a voice of the future.”

On the topic of the LEU bank, the safety and security concerns have surfaced in Kazakhstan once the LEU bank establishment was announced a few years back. Some activists among the local populace expressed concern over the proposed storage of 90 tonnes of LEU on the territory of Kazakhstan. One of the main concerns was the mishandling of the material, whose radioactivity levels are minimal, and the possible outcomes had it ended up in the wrong hands.

“The LEU at the Ulba plant can’t be used to build a bomb, for example,” Director and Senior Fellow at the Proliferation Prevention Programme of the Washington-based Centre for Strategic and International Studies Sharon Squassoni explained to The Astana Times. “That would need to be further enriched to much higher levels at specialised facilities that are non-existent in Kazakhstan. Generally, we believe that terrorists, for example, would be more interested in highly enriched uranium. Kazakhstan, because of its Soviet-era past, has a lot of experience in some of nuclear processing. I am not concerned at all and I am actually glad that the country has stepped up to do this now.”

“On the other hand, the bigger question is, how much does the LEU bank help the non-proliferation community and there, I think, the judgment is mixed. It’s a helpful step but it’s not a panacea. The reason is that the countries interested in purchasing it would have to find other suppliers who can process it. It’s a technically complicated process,” she noted.