ASTANA – Kazakhstan and Romania are taking bilateral cooperation to a new level, tapping into the huge potential for extensive partnerships between the two nations, Ambassador of Romania to Kazakhstan Cezar Manole Armeanu told The Astana Times during a discussion of prospects for Kazakh-Romanian cooperation and priorities for his term. 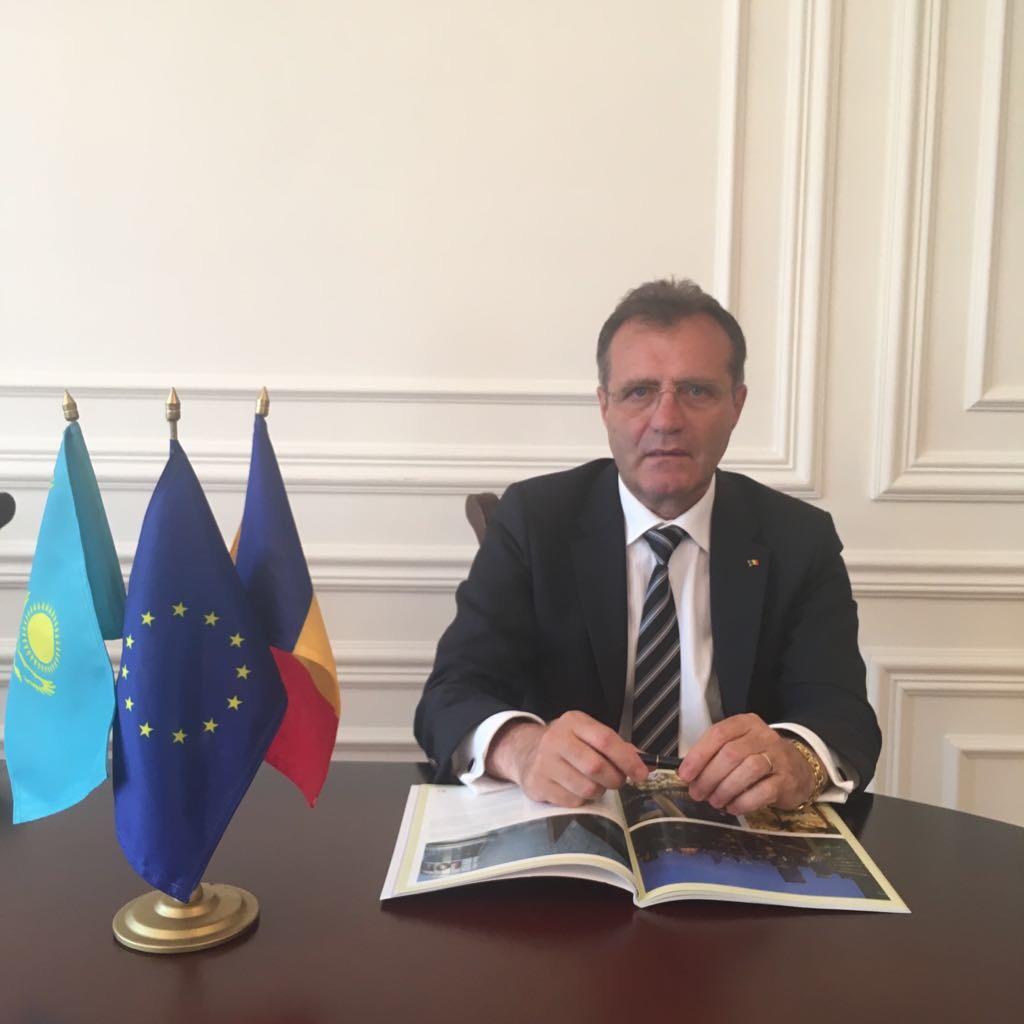 Armeanu embarked on his duties as Romania’s Ambassador to Kazakhstan, Kyrgyzstan and Tajikistan May 16. He presented his credentials to Kazakh President Nursultan Nazarbayev May 30, addressing the leader in the Kazakh language.

“I am very excited to be here in Kazakhstan. I have seen very welcoming and friendly people. I also found that Romania has a very good image and perception in Kazakhstan and there is a real interest in developing mutual partnership. At the same time, the city of Astana, a capital city built in just few years, has greatly impressed me. A lot of work has been done, but the results are in line with the wishes of the ambitious Kazakh people,” said the ambassador.

Armeanu is determined to promote and boost bilateral cooperation at all levels. This has acquired a particular importance following the recent visit of Romanian Minister of Foreign Affairs Teodor Viorel Meleșcanu to Astana and Karaganda July 27-28 to celebrate the National Day of Romania at EXPO 2017 and mark the 25 years of diplomatic relations between Romania and Kazakhstan, home to nearly 20,060 ethnic Romanians.

“On July 15, we celebrated 25 years of diplomatic relations in this very special context offered by EXPO 2017,” added Armeanu, “I take this opportunity to congratulate Kazakhstan for hosting such a prestigious event as well as for the status of a non-permanent member of the Security Council of the United Nations.”

“I believe that the visit of Minister Meleșcanu to Kazakhstan, with the consistent programme he had, sent a clear message that we want to strive for more,” noted the envoy.

Kazakhstan and Romania have been steadily expanding their bilateral ties, exchanging high-level visits with the first official visit of Nazarbayev to Romania in 1998 and the subsequent visit of the Romanian President to Astana a year later.

Romania was also among the first to recognise the independence of Kazakhstan on Dec. 17, 1991, just one day after Nazarbayev signed the Constitutional Law declaring the country’s independence.

“The history of the bilateral relations between Romania and the Republic of Kazakhstan is not only relevant from a political, diplomatic or economic point of view, but also from the perspective of human interaction, links between our people and of our interest in better knowing each other’s culture and traditions to understand our contemporary societies. We consider that education and people-to-people contacts are key elements that can ensure mutual understanding and bring support for values that our countries share, building bridges in areas that are sometimes affected by geographical distance,” noted Armeanu.

Kazakhstan is a strategic partner of Romania, according to Armeanu. The total trade volume between the two countries was $957.7 million last year, with Romanian exports amounting to $64.5 million and imports reaching $911.2 million.

According to Romanian figures, the first four months of this year have brought a 99 percent increase in total trade volume compared to the same period in 2016, rising to $510.5 million. Armeanu said there is a huge potential to bring these numbers higher and find more beneficial partnerships.

With the Romanian Rompetrol oil and gas venture becoming an oversees asset of Kazakhstan’s Kazmunaygas national oil and gas company in 2009 and the accession of Constanta port located in the Black Sea to the Trans-Caspian International Transport Route this year, Kazakhstan and Romania have unveiled new opportunities for their businesses.

The two countries have also similar international development initiatives and in this regard, Romanian RoAid and Kazakhstan’s KazAID could establish a triangular cooperation platform and act as donors to support other countries, the Romanian envoy asserted.

Kazakhstan and Romania also share a significant interest in cooperation in other fields apart from politics and economy, according to Armeanu. “We reaffirm Romania’s interest in developing overall bilateral relations with Kazakhstan. In this respect, we noticed the increasing interest shown by our institutions and experts to cooperate in various fields, including education, science and culture,” the ambassador pointed out.

Experts from Satpayev Kazakh National Technical University in Almaty are also cooperating with their Romanian colleagues from Horia Hulubei National Institute for Physics and Nuclear Engineering in the development of a modern laser model that will be capable of producing power equivalent to 10 percent of the sun’s power.

“The world’s most powerful laser is now being developed and installed on the Magurele platform in Romania. ELI-NP is going to be the most advanced research facility in the world focusing on photonuclear physics and its applications. This unique project will enable the tackling of a wide range of research topics in nuclear physics, astrophysics and the management of nuclear materials and life sciences,” Armeanu explained.

The ELI-NP laser model along with other Romanian initiatives in the energy field are presented to the public in the Romanian pavilion at the expo, which embodies the “spur of science, research and culture of Romania,” according to Armeanu.

With the central theme of “Energy of Light – Journey into the Future,” the pavilion welcomes nearly 2,300 people daily. It has reached a daily high of 5,900 visitors.

At this moment, Kazakhstan and Romania do not have direct flights between their cities, making travel for business people and tourists to and from the two countries expensive and time consuming. Armeanu believes that launching a direct flight between the two nations will step up not only business links, but also people-to-people interaction, an important component of ties between the nations.

“Bilateral relations between Romania and Kazakhstan have seen an ascendant course over the last years. Taking into account the geographical position of Romania and Kazakhstan and the recent increase in the number of passengers travelling from Bucharest to Astana and back, I am looking to finding solutions for opening a direct flight from Bucharest to Astana, because I believe it is needed,” Armeanu asserted. Romania’s national carrier TAROM has already agreed to negotiate the possibility of opening a direct flight between Astana and Bucharest, he reported.