By Dana Omirgazy in Tourism on 1 August 2017

ASTANA – An exhibition of Arabic calligraphy opened in the National Academic Library initiated by the Kazakh Ministry of Culture and Sports and the Research Centre for Islamic History, Art and Culture (IRCICA). Until Aug. 17, visitors can view 30 works of calligraphy, including masterpieces of famous calligraphy masters. 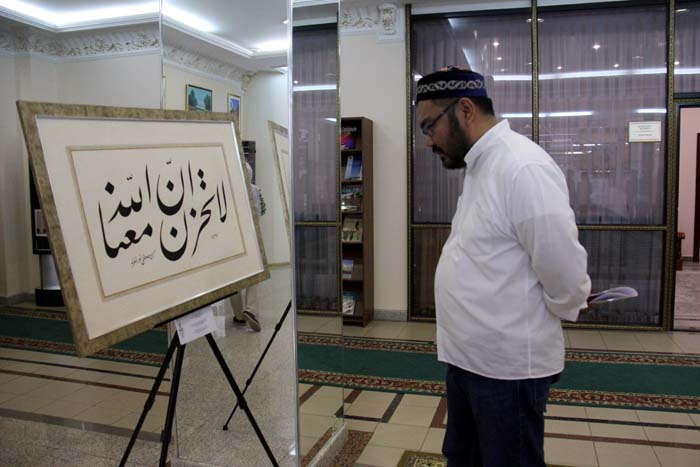 “These are the selected works of the winners of the IRCICA international competitions on calligraphy, held between 1986 and 2016. These works represent different handwriting and they are the best of them. In ancient times, Kazakhstan was also the centre of the world civilisation; Islamic art was developed here, including calligraphy. A lot of Kazakh scientists, theologians and calligraphers are well known and our task is to revive the forgotten heritage in Kazakhstan and other countries of Central Asia. This is the first step,” said Doctor of Historical Sciences, IRCICA Spokesman in Kazakhstan Ashirbek Muminov, expo2017culture.kz reports.

“IRCICA wants to continue cooperation with the Ministry of Culture and Sports. We intend to open the IRCICA cabinet on Islamic culture in the building of the library. We want to bring more than 200 publications to Astana. In addition, a centre will be equipped here, where our scientists will be able to study digitised copies of books from the IRCICA library fund, counting approximately 80,000 books, historical photographs and documents. They too can be made available to local readers,” he added.

According to him, the exhibition features works of the authors of our time. At present, calligraphy attracts growing interest in all countries of the Muslim world, as well as in the European countries.

“These works contain quotes from the Quran, the Prophet Muhammad’s sayings, wise utterances having a sacred meaning. Calligraphy is a merger of the spiritual and the beautiful. It unites talented people of art, who are representatives of different calligraphic schools in the world, for example, from Arab countries, Iran, Indonesia and Turkey. These are the largest powers, where there are several calligraphic schools,” Muminov added.

He highlighted the importance of this exhibition for Kazakh residents and the young generation.

“We hope that the youth will be interested. This exhibition is a kind of education of young calligraphers, who will be able to comprehend the secrets of calligraphy through examples of the best works. I reiterate that Kazakhstan was one of the centres of Islamic civilisation. Calligraphy was developed here. Unfortunately, during the Soviet period, traditions were lost. Now these traditions are reviving. As President Nursultan Nazarbayev noted, spiritual revival and national identity are now especially important,” he said.