ASTANA – The African countries participating in EXPO 2017 celebrated the continent’s National Day Aug. 15 by featuring dance and musical performances as well as extensive discussions between young people from Kazakhstan and Africa. 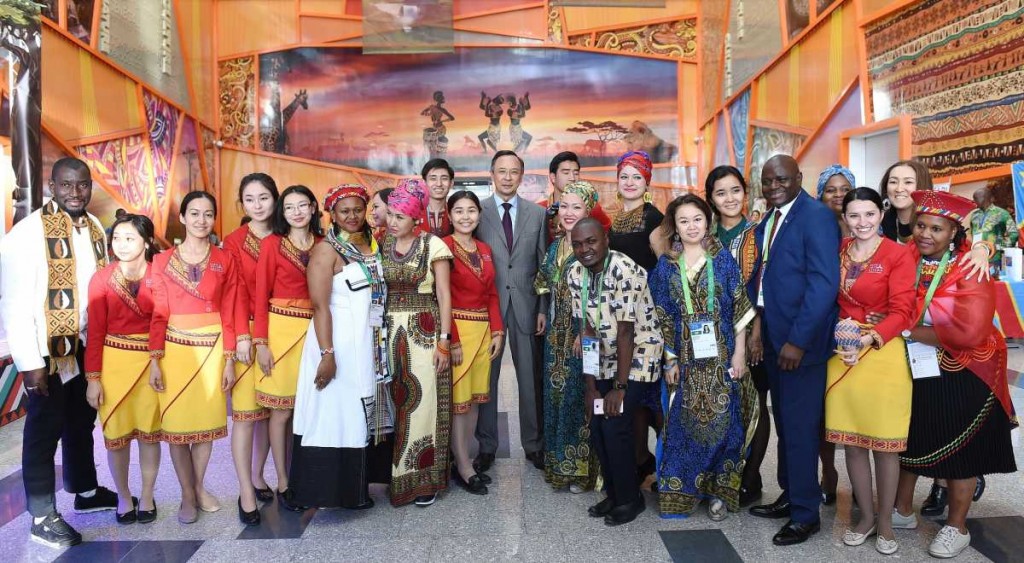 The African Plaza stretches across 2,700 square metres representing 25 countries and their approaches to green energy development.

National Day was marked by individuals talking about tourism, renewable energy and the role of youth in global processes. It also included energetic African dancers performing Kara Zhorga, the Kazakh national dance, and singers presenting their original songs in Kazakh. Famous for its coffee beans and tea, the African Plaza also offered tastings.

In his welcoming speech, Kazakhstan’s expo national commissioner Rapil Zhoshybayev highlighted Africa’s increasingly important role for the country and in the international arena.

“Kazakhstan pays special attention to African countries. We have established diplomatic relations with 45 countries. In 2016, the trade volume between Kazakhstan and African countries reached $250 million and $145 million between January and May of this year. Thanks to the active support of the African states, Kazakhstan has become a non-permanent member of the United Nations Security Council and won the right to host the expo,” he said.

Zhoshybayev noted the African Plaza is one of the most visited pavilions, as its “rich cultural programme, rich cuisine and interesting exhibits” attract visitors.

“I believe the participation of African countries will give an impetus to the development of relations and scientific and technological exchange between Kazakhstan and Africa,” he noted.

Kazakh Minister of Foreign Affairs Kairat Abdrakhmanov joined the celebration later in the day, asserting the new prospects which the expo unveiled for Kazakh-African cooperation.

“This opens new opportunities to expand cooperation between Kazakhstan and Africa in various fields. African countries can access advanced technologies in green economy development,” he said.

“On behalf of all the African states participating in this truly global event, let me congratulate Kazakhstan and Astana in particular for hosting such a memorable event, EXPO 2017, with its theme Future Energy that means so much for us in the African continent,” he said.

“Africa is ready and willing to do business with the world as a reliable, equal partner in a dynamic and globalised world,” he said.

Thirteen African countries already celebrated their national days and more are yet to come. The events turn into a vibrant celebration for the entire plaza, according to South African pavilion Deputy Commissioner Mirranda Mohapi, who believes the expo will eventually result in fruitful cooperation.

“African and Kazakhstan people as well as people from other pavilions gathered today to talk about Africa as a continent to invest in. There were very good discussions and it seems that very good cooperation might come out of it in areas of technical exchange, scholarships and student-to-student exchange, so something big will come out of this expo for Africa and for Kazakhstan,” she noted.

Mohapi’s time in the Kazakh capital is coming to an end and she recalled the time spent there with warmth.

“It was fabulous. I had a good time. Warm people, very beautiful culture. I think the warmth of the people is not very far from our people. For me it was a very eye opening experience, because I did not know much about Kazakhstan,” she said.