Ukraine and Kazakhstan: 25 years of friendship and cooperation

By Kostyantyn Gryshchenko in Op-Ed on 22 July 2017

July 22, 2017 is a special date in the modern history of Ukrainian-Kazakh relations as it marks the 25th anniversary of the establishment of diplomatic relations between our states. 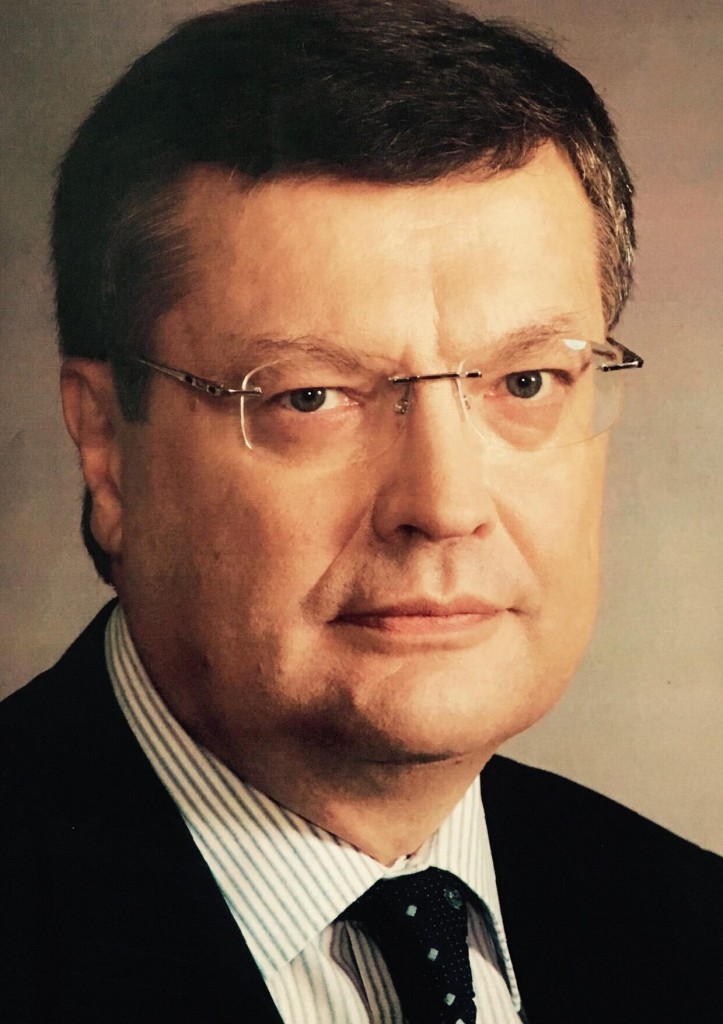 “Time is the most valuable thing a man can spend,” famous ancient Greek scholar Theophrastus once said. We used this resource in full, first to establish and then fill with substance and secure consecutive progress of the relations between our countries. In fact, they did not start with a clean slate. Our peoples had already been intertwined with thousands of ties that have a long and meaningful history.

There are reliable facts that the first Ukrainian settlers, though involuntarily, appeared in Kazakhstan already in the 18th century. The great kobzar (author) Taras Shevchenko, who under the decree of Tsar Nicholas I spent ten years in exile in Kazakhstan, turned into a symbol of spiritual unity of the Ukrainians and the Kazakhs. His creations from the “Kazakh period” of his life, captured on canvas and paper, became not only our common, but also world cultural heritage.

A special page of our common history is the Great Patriotic War. Over 600,000 conscripts from Kazakhstan participated in the battle for the liberation of Ukraine. Overall, more than 300,000 Kazakhs died on the Ukrainian soil. The memory of this is passed on from generation to generation and will forever remain a symbol of the friendship of our peoples.

The history of modern Ukrainian-Kazakh relations can be conditionally divided into several stages. The first was connected with the acquisition by our countries of independence at a time when tectonic shifts happened in the system of international relations. The world ceased to be bipolar, which, on the one hand, greatly complicated international processes, but on the other opened previously unseen opportunities for the newly independent states. Despite going through these challenging processes, when, of course, key foreign policy priorities included securing recognition of one’s sovereignty and establishing and developing relations with the world’s leading countries, we did not forget about the need to preserve and multiply the best things that we had accumulated over many years.

In interstate relations, our countries immediately demonstrated their dedication to mutually respecting each other’s interests, equality and healthy pragmatism. Regular and productive contacts were established between the leaders of our countries. Working in various managerial positions, I also had close working contacts with my Kazakh colleagues, which in many cases grew into a really strong friendship.

Solid legal framework between our countries has formed. By now it amounts to more than 100 agreements and treaties – nearly across the entire spectrum of interstate relations.

All this allowed us to preserve strong cooperation ties, lay a fundamental base for collaboration in the field of space, nuclear energy and many other sectors of the economy. In the late 1990s and in the following decades, when our countries had completed the initial challenging period of the formation of statehood and already embarked on sustainable development paths, we could pay more attention to these and many other issues. A number of joint projects were launched, a free trade zone was formed, etc.

Now a new, completely different stage of cooperation is coming. In the post-Soviet space, major irreversible changes happened. Ukraine is confidently moving on the path of European integration. This is a civilisational choice of the Ukrainian people. Kazakhstan became a member of the Eurasian Economic Union. In parallel, there is an erosion of the Commonwealth of Independent States (CIS) free trade zone, which includes both our countries. These and other factors predetermined the need to adjust the forms of our cooperation.

I know that Kazakhstan is carrying out a large-scale modernisation of the country. The country is implementing political reforms, modernising the economy and renewing its self-identity. Kazakhstan’s healthy ambitions to make a technological breakthrough are an area where our countries can find many points of contact. Ukraine is strong in the field of IT, development and implementation of advanced agricultural technologies. Traditionally, we have a developed industrial production, food and light industry. Recently, the world-famous businessman and philanthropist Elon Musk named the Ukrainian space rocket Zenith as the best, after his Falcon. I would like to emphasise that this is an environmentally friendly and very reliable carrier. Unfortunately, its launches from the Baikonur space port, for reasons beyond our control, were stopped. I listed only a small list of industries where we could confidently increase our cooperation.

Undoubtedly, the focus of our attention has always been on the issues of cultural and humanitarian ties. An enormous role here belongs to almost 400,000 ethnic Ukrainians in Kazakhstan, who not only make a worthy contribution to the development and prosperity of their country, but also serve a living bridge between us. I know that throughout Kazakhstan there are Ukrainian national cultural centres, a newspaper is published in the Ukrainian language, and, within the quota assigned for the Assembly of the People of Kazakhstan in Parliament, a deputy who adequately represents the interests of the Ukrainian community was elected.

I would especially like to note close cooperation within the framework of international organisations, including the CIS, the Organisation for Security and Cooperation in Europe (OSCE), the UN and others. It is profoundly symbolic that at one time Kazakhstan passed the baton of chairmanship in the OSCE to Ukraine. Kazakhstan’s presidency is considered one of the most successful in the history of the Organization. The Ukrainian Chairmanship kept the high standard and made its own significant contribution to the work of the OSCE.

Now Ukraine and Kazakhstan are non-permanent members of the UN Security Council. Our countries have approached this very important mission in the most serious manner. And in this connection, I would like to note the political address of President of Kazakhstan Nursultan Nazarbayev to the UN Security Council with a conceptual vision of ways to achieve global security. They include proposals on nuclear disarmament, countering terrorism, environmental aspects of security, enhancing and adapting the UN system, etc.

Obviously, the achievement of the goals set by Kazakhstan, especially on issues of nuclear disarmament, faces strong resistance of those who do not see in these initiatives the path to peace that is based on mutual trust and cooperation. We see that a number of countries in the world community, contrary to common sense, continue to build up their nuclear arsenal and actively conduct test explosions. And other countries in so-called “Nuclear Club” are unlikely to voluntarily give up their nuclear capabilities. However, the international movement aimed at achieving a world free of nuclear weapons is gaining momentum.

Ukraine and Kazakhstan have already made their huge historical contribution to the expansion of the non-proliferation regime by voluntarily renouncing their nuclear weapons. Thus, our countries have shown their political maturity, consistency and responsibility to present and future generations.

Our countries have established themselves as some of the most consistent and active participants in the process of nuclear disarmament. I know that, on Kazakhstan’s initiative, August 29 was declared the International Day against Nuclear Tests, and in 2015 the UN General Assembly approved the Universal Declaration on the Achievement of a Nuclear-Weapons-Free World. The Kazakh President’s program document known as Manifesto “The World. The 21st Century” is commendable.

Another date that I became aware of is the 25th anniversary of the diplomatic service of the Republic of Kazakhstan, which also occurred in July of this year. First of all, I would like to congratulate my Kazakh colleagues on this anniversary. They have something to be proud of.

This includes Kazakhstan’s chairmanship in the OSCE and non-permanent membership in the UN Security Council, the initiative on launching the Conference on Interaction and Confidence Building Measures in Asia, convening the Congress of Leaders of World and Traditional Religions, holding of EXPO 2017, and many more. I can assure Kazakhstan has a positive image in the international arena and has established itself as a reliable partner.

Kazakhstan’s good reputation in the international community has become a fundamental factor for Astana’s choice as an interactive platform for inter-Syrian reconciliation. The country’s contributions to the settlement of the recent confrontation between Moscow and Ankara, as well as on Iran’s nuclear dossier are well known. All of this is the result of the international respect that President Nazarbayev enjoys and the effective work of Kazakhstan’s foreign ministry.

One of the main achievements of the Kazakh diplomacy, which I would like to focus on, is the legal confirmation of the state borders. The removal of territorial disputes is the most important factor in the security of any country, although, to a deep regret, it does not guarantee the inviolability of borders. For Ukraine, this topic is very painful. Our country is going through challenging times. Therefore, any support is important for us. And we feel this support from Kazakhstan and its people. We appreciate the contribution of President Nazarbayev to the search for the most effective approaches to the settlement of the conflict in the southeast of Ukraine and the humanitarian assistance provided to the residents of the affected region. All this was done sincerely. This is especially valuable. And further strengthens the friendship of our peoples.