By Aigerim Seisembayeva in Astana on 6 July 2017 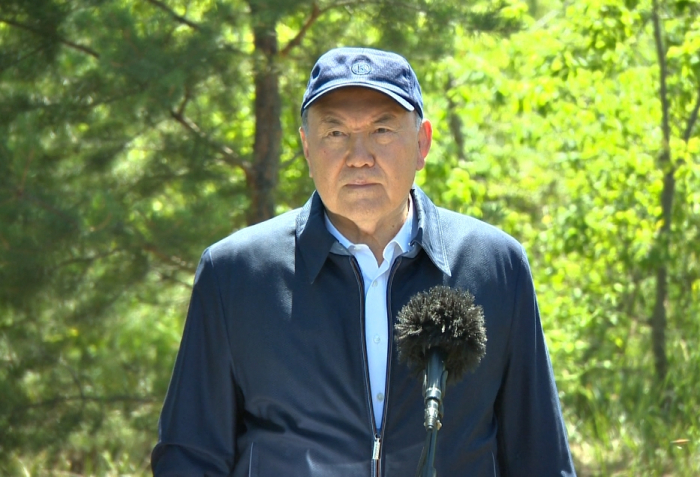 “I would like to thank the scientists and forest rangers for their work. It is not so easy to grow trees in this area. Now we have a big forest here that has become a natural oasis inhabited by animals and birds,” he said in a briefing to the media after reviewing the forest belt from the air on July 4.

The 80,000-hectare green belt was planted at Nazarbayev’s direction in 1997 and is expected to reach 100,000 hectares by 2020. The plan is to connect the green belt with the closest nearby natural forest at the Burabai resort.

“This forest will be here for as long as people live here. This is the wealth of our country. Astana is hosting the EXPO 2017 international exhibition that promotes the capital’s image as a city committed to the principles and ideology of green development,” said the President, noting the forest’s role in improving the local climate and ecology.

He also briefed the media on the construction of a recreation zone in the green belt.

The green belt is supported by the 110-hectare Ak Kaiyn forest kennel near Astana, which produces about nine million seedlings annually for 26 species of trees suitable for the local climate.

The President also chaired a meeting on the green belt after reviewing it from the air. The meeting was attended by Vice-Minister of Agriculture Yerlan Nyssanbayev, head of the Presidential Administration Adilbek Dzhaksybekov, Astana’s Akim (Mayor) Asset Issekeshev, Akmola region Akim (Governor) Malik Murzalin and Deputy Prime Minister and Minister of Agriculture Askar Myrzakhmetov.

Nyssanbayev reported that the green zone is constantly monitored and supported.

After flying around the ‘green belt’, Nazarbayev visited the ethnoaul (ethnical village) located in the Bal Karagai recreation area.