By Anuar Abdrakhmanov in Sports on 26 July 2017 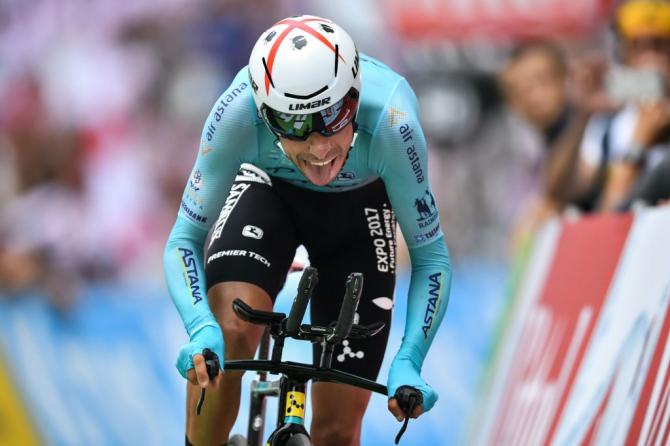 Aru’s finish follows a particularly challenging Tour for the Astana team. The race began well with Aru winning the direct stage and capturing the yellow jersey early. However, difficulties quickly mounted for the Astana racers. After one of the early stages, Dario Cataldo and Jakob Fuglsang, who were expected to perform as Aru’s primary support, could not continue the race. Team leader Alexei Lutsenko was also seriously injured and was unable to mount a successful attack near the end of the Tour.

“Basically, I think we did well, taking into account the circumstances. We lost Jakob Fuglsang and Dario Cataldo. However, the guys still worked at the maximum. We took the stage, took the yellow jersey. If it was not for Fuglsang’s fall, I think the result would have been different, at least, at the mountain stages. I am glad that Bakhtiyar Kozhatayev noticeably improved. Alexei Lutsenko, despite the fall, managed to return to the race and fought till the end. We all saw his attacks in the Pyrenees. I think that Kazakh riders are improving. Dmitry Gruzdev coped well with his task. Well, as for Andrei Zeits, we saw him real here. As always, it’s nice to look at him, he works and helps the team,” said team General Manager Alexander Vinokurov.

Despite the challenges, one high note was that Astana took part for the first time in the Grand Tour, having four riders for Kazakhstan in the lineup. Zeits, Lutsenko, Gruzdev and Kozhatayev showed the level of Kazakh cycling has reached a new level.

“I think that the results of the last Tour de France were positive for the Kazakh team. When our captain Fabio Aru put on the yellow jersey, everyone thought that the victory was so close. But this is sport. Anything can happen. One of the main minuses was the loss of two of our riders during the competition. This was a real blow to the whole team. Both Fuglsang and Cataldo were great members of the Astana team. It is good that four Kazakhs in the team passed the race till the end. The two of them were in the lead at the last stage in Paris, thus proving that we have a future in cycling,” said President of the Cycling Federation of Kazakhstan Darkhan Kaletayev.

This year’s Tour finished with the traditional “stage of friendship,” when the favourites of the overall standings do not compete. Another tradition of the “stage of friendship” is the sprint finish. Each year there are many who want to break this tradition and deceive the sprinters with a late attack from the main group. Vinokurov once managed to do it. Lutsenko and Gruzdev tried to repeat his achievement at the last stage of the last race, but a few kilometres before the finish the main group caught up with them.

British rider Christopher Froome won Tour de France in the overall standings. This is the fourth yellow jersey in his career. The runner up was Colombian Rigoberto Uran with third place going to Romain Bardet.