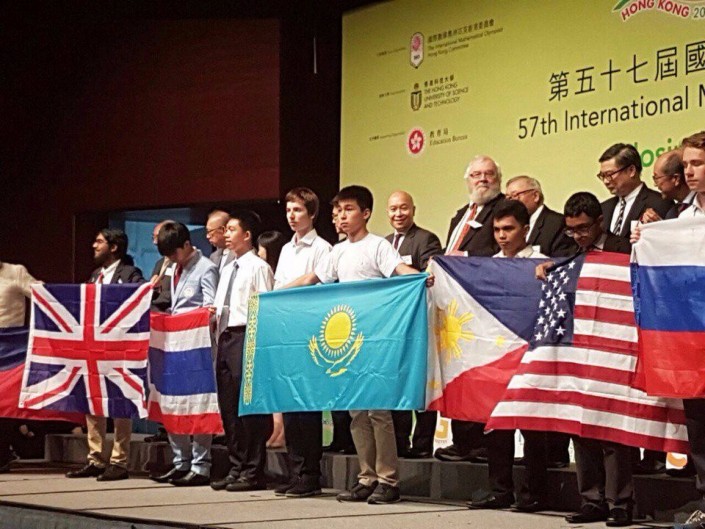 The 2017 Olympiad was one of the most difficult in the past few years, according to the jury. The competition lasted two days, with students working on six math problems, or three per day. They had four and a-half hours to accomplish the task.

The Kazakh student received 25 points out of 42, which brought him a gold medal. The highest score of 35 was achieved by a student from Vietnam.

Mokhammed-Ali’s parents had no doubt about their son’s ability.

“Amir has been preparing for this Olympiad since August of last year. He trained eight-nine hours per day and had distance classes with Russian tutors and leading Kazakh mathematicians. He won the International Zhautyk Olympiad in January and National Olympiad in March and here is his new victory. He called us after the first day and said that something had gone wrong and that the results would not be very good. We started to worry, not about the results, but about him. Last year, the victory put a moral burden on him. He had a feeling of responsibility and was determined to win. We were very happy to see on the website that he won gold,” said his father, Ali Abulgazinov.

The Kazakh team needed to return home early due to a tight schedule, thus missing the closing awards ceremony. As a result, Mokhammed-Ali learned about the results at the Amsterdam airport just before their flight home.

“While waiting for the results and for the first day of the Olympiad, our children became worried. In addition, this nine-hour time zone difference affected them. Our children were solving problems when it was already night time in Kazakhstan. This is when the brain works slower. Yet, the students were able to show decent results,” said Mokhammed-Ali’s teacher, Arystan Tekenov.

Based on the results, the Kazakh team took one gold, two silver and one bronze medal, finishing 25th overall. South Korea topped the country rankings, followed by China, Vietnam and the U.S.

A gold medal at the IMO opens up many opportunities, including a university education. Although Mokhammed-Ali has not yet finished school, he was awarded two scholarships from Almaty-based Kazakh British Technical University and Al-Farabi Kazakh National University.

His plans, however, are not confined to Kazakhstan.

“Unfortunately, Kazakhstan’s universities offer only a 50-percent discount and tuition fees here are quite expensive. However, this is not the main point. Amir intends to apply to top universities in Asia and the U.S, for instance, Massachusetts Institute of Technology. As parents, we do not want to convince him to stay here. It is his life. He is trying to achieve something. We want to let him try and learn. He will always have time to come back home,” noted his father.

Mokhammed-Ali will start preparing for his university coursework in August. He wants to study science.

“If not directly, my major will relate to applied math for sure. I have one year at school, during which I will be preparing for the IMO in 2018 where I am determined to win. I would like to beat the record of distinguished Kazakh mathematician Kuat Issenov, who claimed silver and two golds at prestigious international math championships. I am determined to win gold for the third time,” he said.

His parents noticed his math skills when he was in first grade. Mokhammed-Ali has been studying math intensively since the sixth grade and three years later became a bronze winner at the national Olympiad.

“The student is very smart. He loves what he does; therefore, he is diligent and hard-working,” said Tekenov.