By Anuar Abdrakhmanov in Sports on 11 July 2017

ASTANA – Two of the three Kazakh football clubs that began their campaigns in the UEFA Europa League qualifying rounds in late June and early July have made it over the first hurdles. Kairat Almaty and Irtysh Pavlodar are on to the second round, while Ordabasy Shymkent was knocked out of the competition by a Bosnian side. 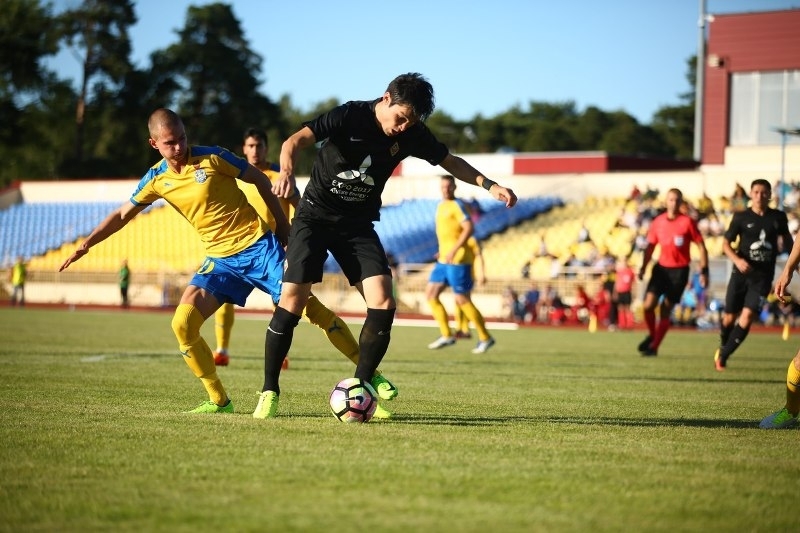 Kairat therefore felt more than confident in the return match, and indeed went on to win again, this time by a more modest 2-1. Early in the game, the hosts scored through Andrei Ciofu’s effort. However, a couple of minutes later, Ilicevic levelled the score, and at the end of the first half, Gerard Gohou gave Kairat a lead. The second half did not see any goals.

In the next round, Kairat will play Skenderbeu Korce, representing the Albanian Superliga.

“I congratulate the team on going through to the next round. Of course, we expected Atlantas to try to bounce back after the first game. They showed a very great desire in the beginning. We tried to prepare the team psychologically to make it more focused, but, unfortunately, we missed a goal at the beginning of the game. Then, of course, we got a hold of ourselves and began playing [better]. The most important thing is that we won this game and earned points for the country and for ourselves. The guys coped with the task and won the match,” said Kairat head coach Kakhaber Tskhadadze after the game.

It was more difficult to secure a place in the second qualifying round for Irtysh, which had Bulgaria’s FC Dunav as their challengers. At home, the Pavlodar club secured a minimal 1-0 advantage, but everyone understood this was not enough to rest comfortably ahead of the return match. As the first game showed, the Bulgarians were a very strong and well organised team.

That is why in the away match, Irtysh decided to attack right away. The decision bore fruit. In the sixth minute, Pavlodar defender Mario Maslach made good use of a cross from a corner strike and sent a header into the top corner of the hosts’ net. Dunav responded with a very dangerous combination that could have ended in a goal, were it not for the skills of Kazakh goalkeeper David Loria.

After half time, Irtysh managed to maintain its advantage, as the visitors were leaving no free space for Dunav’s strikers. Two minutes ahead of the referee’s final whistle, midfielder Aslan Darabayev made a low 17-metre shot that brought the Pavlodar side its second goal in the match. Thanks to the confident 2-0 win, the Kazakh club made it to the second qualifying round of the Europa League.

“Despite arriving [in Bulgaria] in advance to adapt and prepare, it was a bit difficult because of the weather conditions. We mostly train on an artificial field, but there is a natural field here, and it was wet and slippery, so we had to get used to it. The main thing is that we showed grit. We followed the instructions of the coach, went to the next round and pleased our fans,” said Darabayev.

Irtysh will now play Crvena Zvezda, the Serbian club that famously won the European Champions Cup back in 1991. For the Belgrade club this will be a third encounter with Kazakhstan, all in the Europa Legue (previously known as the UEFA Cup), as it twice met Kairat, eliminating them in 2003 before being crashed away two seasons ago.

Quite a disappointment was Ordabasy’s defeat by Siroki Brijeg. The 0-2 defeat in the first match in Bosnia and Herzegovina put the Shymkent side in a hole they never found their way out of. There was hope that if Ordabasy’s strikers were at their best they could bounce back in Kazakhstan with the support of their fans. However, the hosts failed to convert their few chances into goals.

Kairat and Irtysh will play their next Europa League matches on July 13 and 20, both starting at home. They are joined now by FC Astana, beginning their attempt to return to the UEFA Champions League with an away match in Latvia against FK Spartaks Jurmala July 12. The return leg will be played at Astana Arena July 20.