ASTANA – With Hollywood stars like Adrien Brody, Nicolas Cage and John Malkovich in attendance, this year’s Eurasia International Film Festival has attracted quite a bit of attention. The largest film festival in the region, which opened July 22, will run through July 28. 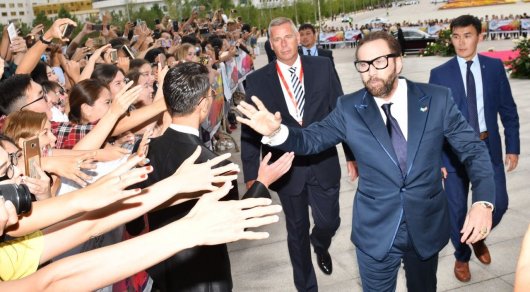 The event, typically held in Almaty, is being hosted in the capital.

Day one started with press conferences featuring Oscar winners Brody and Cage. Malkovich is expected to come for the closing of the festival on July 28.

“I am very happy to be here. I was expecting to come to this prestigious film festival. … I am happy to support film festivals around the world and I am very grateful for the invitation. I was reminded how many beautiful people live here and how much appreciation there is here not only for my work, but for creativity, music and the arts,” said Brody.

Since arriving a day earlier, he had an opportunity to tour the city. Brody noted he was impressed by conductor Alan Buribayev’s performance at the Astana Opera, as well as the expo, calling it “spectacular.” Brody even ate national food at the ethno village, adding he tried everything.

The press conference focused mostly on the actor’s hobbies, such as painting, and his experiences, including his performance as Wladyslaw Szpilman in “The Pianist.” 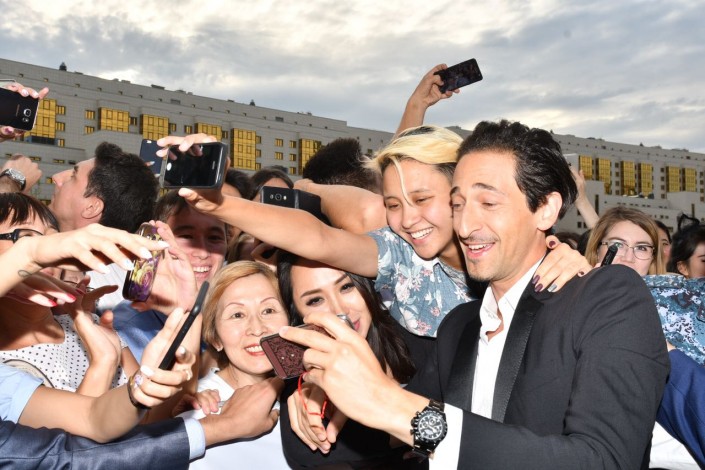 One of the brightest moments came when Brody announced he would like to make a donation to one of Kazakhstan’s children’s organisations. The details will be discussed at a later date.

Cage noted he would like to take part in projects in the region and talked about the thrill of being in the capital.

“When we were landing, I saw a spectacular view of Astana. It reminded me of an old science fiction movie I once watched called ‘Things to Come’ by Alexander Korda. A very futuristic city,” he said.

He also talked about his plans, his upcoming film ‘Mandy,’ past works and independent and commercial films, as well as Coppola family traditions.

Both actors took part in the festival’s opening ceremony, shaking hands with fans and taking selfies as they walked the red carpet. 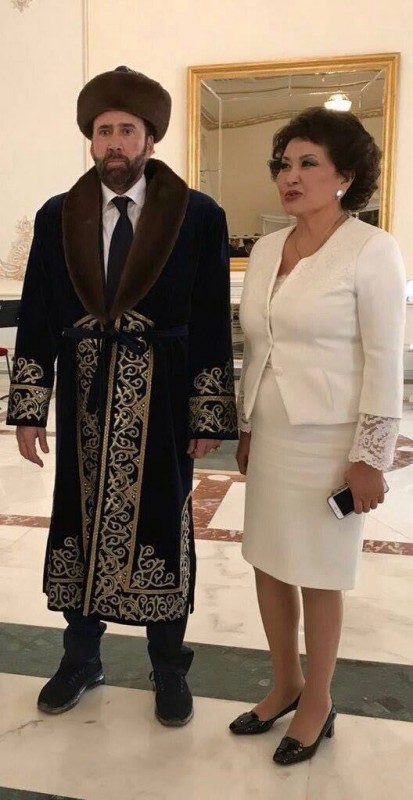 While Brody left that evening, Cage remained to participate the following day in opening Five Continents, the first International Children’s Film Festival. He met with the special guests – children with limited abilities – and he and Akim (Mayor) Asset Issekeshev planted trees at the Schoolchildren’s Palace as a symbol of the festival’s birth and growth.

Cage could not leave Kazakhstan without becoming a meme. During the cultural programme, the actor received Kazakh traditional outfit (chapan) as a gift, which he immediately tried on. Cage stood still and emotionless for the photo op and the meme has become the country’s hottest topic with an abundance of humourously photoshopped pictures.

The 13th Eurasia International Film Festival features a record 296 films from all continents, including 101 in the main programme and 12 feature length and 30 short films in the juried competition. The event is accredited by the International Federation of Producers’ Associations and in 2012 was included in the International Film Guide’s list of the world’s 35 leading film festivals.

The Five Continents programme is composed of five films and a panorama of 10 films, including the work of creative groups from nations including Afghanistan, China, Denmark, France, Georgia, India, Iran, Italy, Kazakhstan, Mexico, the Netherlands, Peru, Spain and Tunisia. The films will be evaluated by a special children’s jury consisting of young actors, musicians, poets and athletes.

This year, the organisers also established the Tulpar National Award for films from Kazakhstan, Central Asia and Turkic-speaking countries. Another novelty is the introduction of the Eurasia Film Market for film sellers and buyers from the Commonwealth of Independent States (CIS), China, India, South Korea and European and American countries.