I have served as ambassador of Israel to Kazakhstan twice, in the periods between 1996-2002 and 2008-2012. Thanks to this, I am able to analyse the changes that have taken place in Kazakhstan during this period. I should note that most of them are positive. 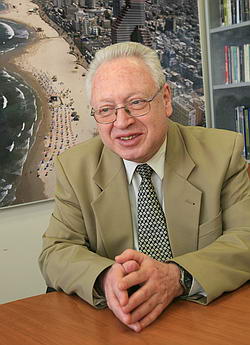 The changes include: the new course towards economic diversification, development of transport infrastructure, creation of regional economic unions within the framework of Eurasia, implementation of President Nursultan Nazarbayev’s idea of creation of a customs union between Armenia, Belarus, Russia, Kazakhstan and Kyrgyzstan. Modernisation also touched the Kazakh economy, development programmes and the institute of democracy. The growth of the country’s international influence was symbolised by anti-nuclear international initiatives of Kazakhstan and accession to international organisations. It is also important to note Kazakhstan’s non-permanent membership in the UN Security Council in 2017-2018.

In this review, I do not quote the statistical data, but mention only those events that I witnessed as an Israeli diplomat.

The diplomatic relations between Israel and Kazakhstan were established in April 1992. Israel was the seventh country, which established diplomatic relations with Kazakhstan. During my first visit to Kazakhstan, I was impressed by the nature of Almaty and warm and friendly attitude of the Kazakh Foreign Ministry staff. The performance of the vocalists and orchestra of the National Opera impressed me a lot. It was my first contact with Kazakh culture.

After a while, Israel opened its embassy in Almaty. It was a large building in the centre of the city. The two countries’ relations developed intensively. In September 1992, Prime Minister of Kazakhstan Sergei Tereshchenko travelled to Israel for the first official visit. He was impressed by the level of development of the Israeli economy, especially in the agriculture sector.

The year 1995 was marked by the first official visit of President Nazarbayev with his wife to Israel. At that time, I served as a referent of the Israeli Foreign Ministry and accompanied Nazarbayev. There were significant agreements in economy, trade, agriculture and healthcare sectors signed.

In 1996, I arrived to Kazakhstan as an ambassador. I was the second Israeli ambassador to Kazakhstan. I remember the ceremony of presenting credentials to Nazarbayev. I managed to talk with the Kazakh President for a long time without an interpreter. I felt that I was talking with the outstanding leader of the ninth largest country in the world, that used to possess a huge arsenal of nuclear weapons and was home to the Baikonur spaceport.

In September 1999, I took part in the meeting of Foreign Ministers of the Conference on Interaction and Confidence Building Measures in Asia (CICA), a prototype of the legal security architecture in the Asian subcontinent. The CICA is important for Israel, because it allows participation in meetings with those countries with which there are no diplomatic relations, such as Iran, Indonesia, Malaysia, Pakistan, etc.

In 2002, I went back to Israel, but I knew that I would comeback. It happened in 2008. My wife and I arrived to the new capital of Kazakhstan Astana.

The peak of diplomatic relations between Israel and Kazakhstan was reached in 2009. Heading a large delegation of ministers and businessmen, Israeli President Shimon Peres arrived to Astana. Despite the severe climate conditions, they were impressed by a beautiful architecture and developed infrastructure. Peres delivered a speech at the third Congress of Leaders of World and Traditional Religions, which was attended by 77 delegations from 35 countries of Europe, Asia, America and the Middle East. The visit resulted in significant increase of mutual trade turnover.

On Dec. 1-2, 2010, Kazakhstan held the Organisation for Security and Co-operation in Europe (OSCE) Summit in Astana. Nazarbayev described this summit as a historical event for the entire OSCE community.

In 2011, Astana held the Seventh Winter Asian Games that took place in the Astana Arena stadium. There Kazakhstan won 32 gold medals. 2,000 foreign journalists covered the competition. About 500 million spectators in the whole world followed the course of the games.

In July 6, 2017, a brainchild of Nazarbayev, Astana celebrated its 19th birthday. This city impresses with its architecture, planning, cultural and scientific life. Throughout the years of my work in Kazakhstan, I was impressed by friendliness of the Kazakh people towards other nationalities living in Kazakhstan.

I am sure that friendly relations between our countries will continue to develop and strengthen. I wish current Israeli Ambassador to Kazakhstan Michael Brodsky success in his work.

The author is former Ambassador of Israel to Kazakhstan.