By Malika Orazgaliyeva in International on 13 July 2017

ASTANA – Kazakh President Nursultan Nazarbayev and German Federal President Frank-Walter Steinmeier discussed bilateral political, economic, cultural and humanitarian cooperation July 12 in the Akorda presidential residence. It was Steinmeier’s first official visit to Kazakhstan as president and was timed to mark the 25th anniversary of diplomatic ties between the two countries this year. Nazarbayev congratulated Steinmeier on his presidency and noted the long-standing cooperation between Kazakhstan and Germany.

“Today, we are at a new level of strategic partnership on a broad spectrum of political and economic relations. I informed President Steinmeier about Kazakhstan’s development, as well as our foreign policy tasks. Germany is our reliable friend and key economic partner. There are more than 900 joint ventures successfully operating in Kazakhstan. To this, the amount of direct German investments is more than $4 billion,” Nazarbayev said.

Nazarbayev also touched on bilateral relations in agriculture and transit.

“Presently, the Kazakh side is interested in developing bilateral cooperation within the new programmes,” he said.

“Productive work of the Intergovernmental Commission and Business Council is of a great importance. Today, more than 20 documents have been signed for a total amount of $1 billion,” Nazarbayev added.

Steinmeier thanked Nazarbayev on behalf of the German delegation for his invitation to visit Kazakhstan.

“Thank you for the hospitality and warm words both about Germany and me personally. It is my first visit to Kazakhstan in the position of the president. This visit is special because this year marks the 25th anniversary of establishing diplomatic relations between our countries,” he said.  Steinmeier visited Kazakhstan twice in the past as German foreign minister. 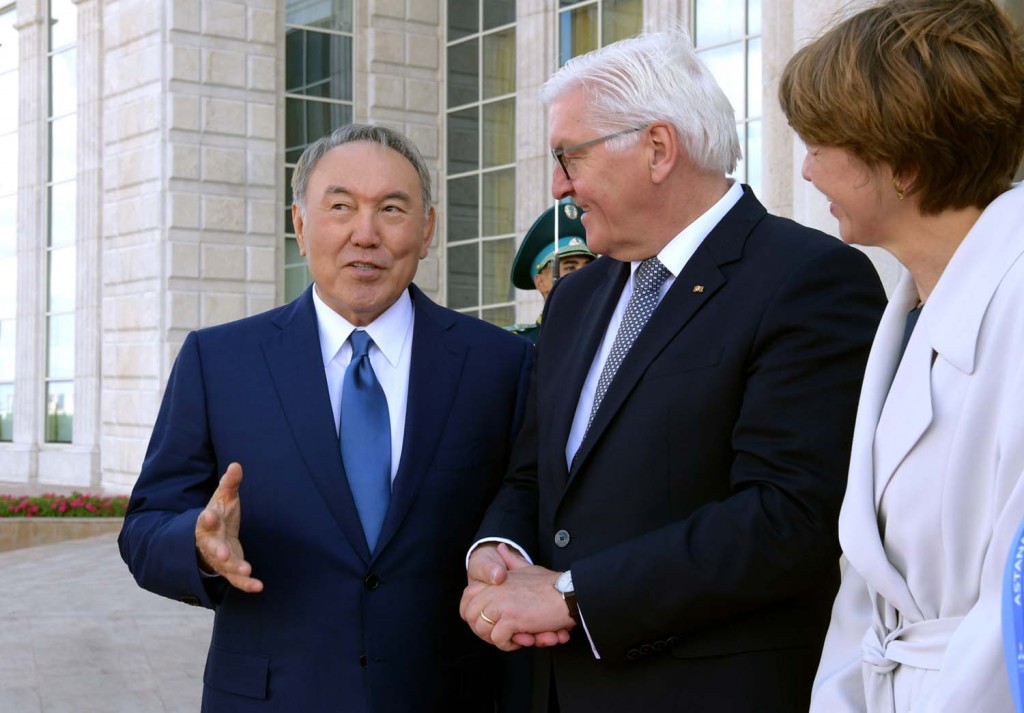 The two presidents also discussed conflicts in southeast Ukraine and the Middle East.

Steinmeier also noted the participation of German organisations and companies in EXPO 2017.

Prior to the meeting, Steinmeier visited the new building of the Evangelical Lutheran Church in Astana. The Church is part of the World Lutheran Federation and most of the parishioners are descendants of Germans deported to Kazakhstan in the 1940s by the Stalin government of the USSR.

The event was a reflection of a comfortable dialogue of cultures and interfaith harmony in Kazakhstan.

On July 11, the Ministry of Foreign Affairs of Kazakhstan held the 15th meeting of the Intergovernmental Commission on Ethnic Germans living in Kazakhstan chaired by Kazakh Deputy Foreign Minister Roman Vassilenko and Fed­er­al Gov­ern­ment Commission­er for Mat­ters Re­lat­ed to Eth­nic Ger­man Re­set­tlers and Na­tion­al Minori­ties Hartmut Koschyk. The commission was established in the 1990s.

Vassilenko told the commission Astana attaches great importance to bilateral cooperation, noting the importance of the matters of ethnic Germans living in Kazakhstan.

Koschyk thanked the Kazakh government for supporting the German diaspora and said Germany wants to strengthen ties between Germans of Kazakhstan and Germany.

The meeting produced a communiqué summarising the results of the meeting and establishing plans for joint work.

Prior to the commission meeting, the German delegation met in the Pavlodar region with representatives of the Association of Public Associations of Germans of Kazakhstan Vozrozhdenie (Revival) and members of the local German community. Vozrozhdenie organises events to support ethnic German youth living in Kazakhstan.