By Kamila Zhumabayeva in People on 14 June 2017

ASTANA – A car accident left 19-year-old Yeldos Bayalyshbayev disabled years ago. He had a neck bone fracture, paralysis of limbs and a bedridden life. At least that was what doctors told him. But persistence, family support and care not only got Bayalyshbayev up on his feet again but also inspired others like him to do the same at a rehabilitation centre he built and has been successfully running. 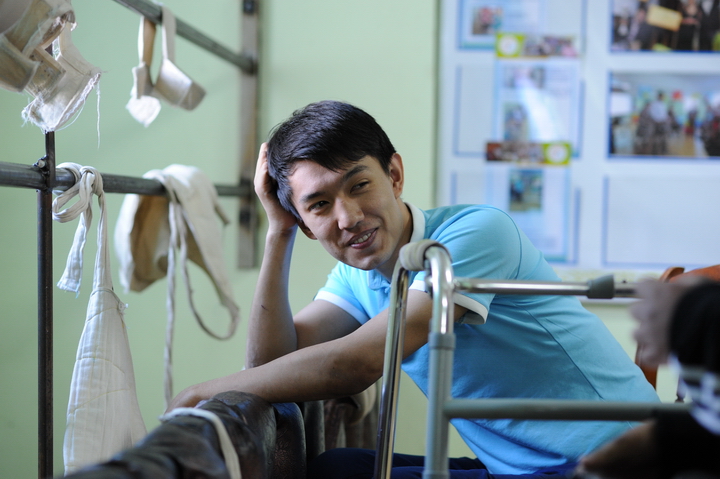 “Motivation happens when you make your ideas come to life and it helps people, makes their life easier. When I see happy looks on their faces, this is the strongest motivation for me and I want to work even more,” Bayalyshbayev said in an interview for this story.

After years of daily trainings, he was able to sit down, then crawl on all fours and finally get up and walk small distances with help. Bayalyshbayev held strong and optimistic in spite of difficult and traumatic moments.

“When Yeldos sat down in a wheelchair, we believed we had a real chance he will be able to walk. We were convinced that exercises give efficient results. We took all seating furniture out of the living room and placed parallel bars and bolsters. We started teaching him to crawl but this wasn’t easy. Two and half hours went to make it from one side of a room to another. He would start over and go on until late night,” Bayalyshbayev’s parents said in an interview on 365info.kz. 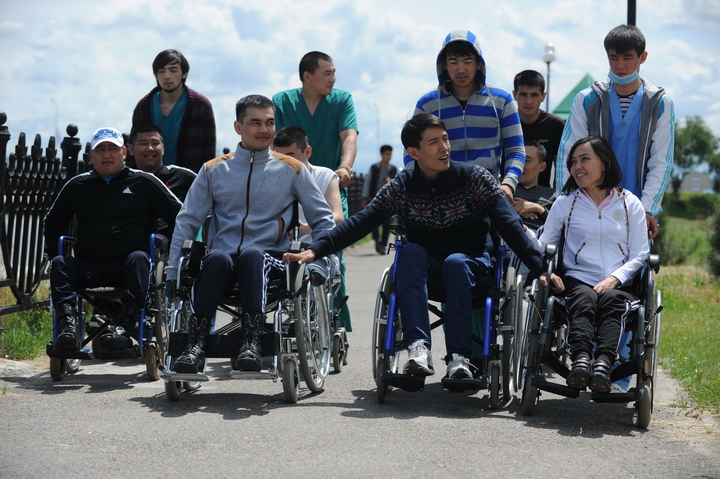 Bayalyshbayev decided he wants to help others get up on their feet and opened a sports rehabilitation centre for people with disabilities. Back then Akim (Mayor) of Taldykorgan Yermek Alpysov supported this idea and allotted more than 300 square metres of premises for this purpose.

“I took part in the Business Road Map 2020 programme and won a three million tenge (US$9,582) grant. We produced rehabilitation exercise equipment, but they are copies of Swedish rehab training equipment. All training devices were handmade,” Bayalyshbayev said.

“At our Asar Centre for people with special needs, we try to make everybody get up on their feet and become independent. Thanks to special training equipment that we made in three years, more than 280 people from the entire Kazakhstan have gone through rehabilitation at our centre,” he noted.

Colossal results took place within this period of time, according to Bayalyshbayev. Fifty-five attendees stood up and began walking with the help of a walking frame, 50 learned crawling, 60 to 70 people were able to work with training machines on their own.

Apart from improving their health, many were developing their creative skills too.

“We began arranging performances. While during trainings, we had our own team formed and we began performing on concerts. Turned out, our centre had many talents, someone can sing well, another person composes poems and some can dance. We even have our own KVN [comedy and game show] team and they had already placed high on a regional level and are at a national level now,” Bayalyshbayev states. 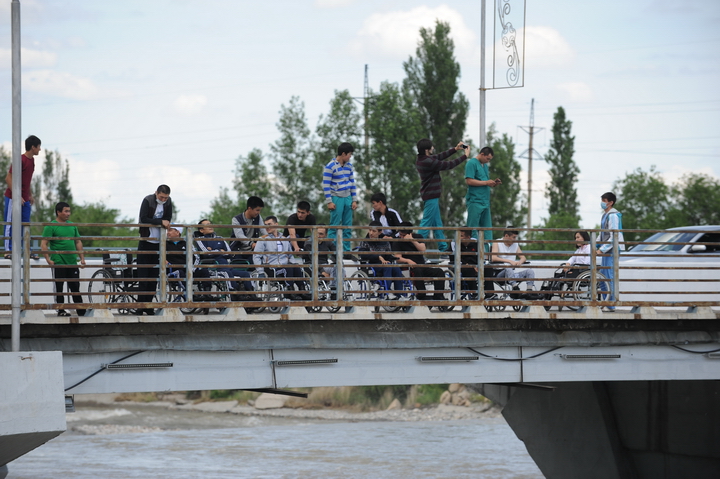 He has been involved with swimming from early childhood. Bayalyshbayev was travelling to Lake Alakol every year after his trauma as he believes the lake and its famous curative mud have health benefits; salty waters are good for joints and musculoskeletal system recovery and water rich with minerals has a whole Mendeleev periodic table in it.

“Having visited the lake I noticed one can rarely meet people with disabilities resting on the shore and I fell to thinking ‘what is the matter?’ The issue was that there wasn’t an access to the shore. Platforms are needed for people on wheelchairs to get around with ease. Many boarding houses for tourists are available there but not one of them fits people with disabilities,” Bayalyshbayev said.

He had an idea at that moment to make it more accessible and have a specialised boarding house. To make that happen, Bayalyshbayev prepared a business plan and applied for the Startup Bolashak contest. He landed 2nd place after beating thousands of other contestants and made his plan come to life.

“Not just people with disabilities used this platform but also retired people. All were thankful,” the young man mentioned.

One of the biggest wins was a grant contract for $82,818 at an international contest in 2017. The money went to purchasing advanced training equipment for rehabilitation from Italy, Poland, Germany, the U.S. and China. This, according to the entrepreneur, moved the rehabilitation process up to a new level and quality.

“My motto is one does not need to wait when someone will do it but take matters in own hands, solve this problem and help the government to contribute to society! Many opportunities are available now to realise your idea. There are grants, contests and so on. Only don’t sit still at one place or take pot luck especially at a young age but work on your goals!” Bayalyshbayev added.