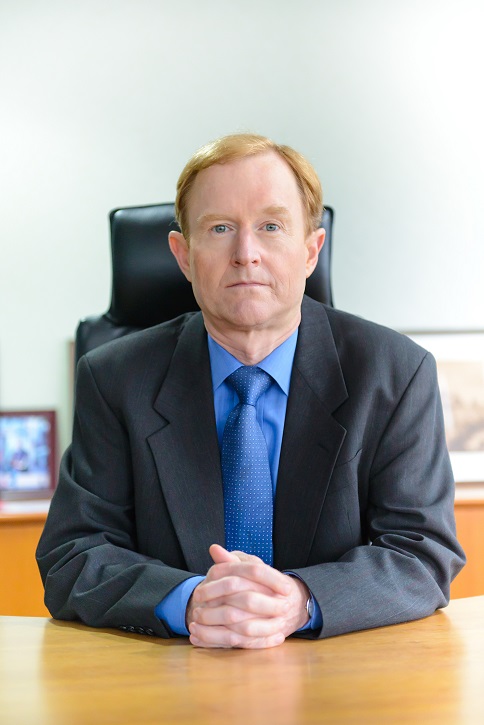 “We will not return to the boom times of high oil prices, but the trend is up,” he told The Astana Times in an exclusive interview.

“In 2015-2016, we’ve been at the lowest point – currency devaluation, low oil prices. The significance of [the launch of] Tengizchevroil’s Future Growth Project cannot be overemphasised and the Astana EXPO will bring a lot of visitors to the country,” he added.

Originally from South Arica and an expat since 1998, Ahern lived three years in Poland. He moved to Belgrade, Serbia, in 2001, where he lived another three years, then moved back to Poland in 2006. While there, he worked on many transactions and became familiar with almost all countries in Central Europe – from the Baltic States all the way down to Albania.

“I have a pretty good knowledge of these countries and their people,” he told the paper. He believes “the impact of China is significant for Kazakhstan” in speaking about the forecast for latter’s economy for the near future.

“Kazakhstan is a part of the route connecting China and Europe, rather than Chinese investments in the Kazakh oil and gas industry. This will help to significantly develop the country’s infrastructure. Something to think about is the impact on Kazakhstan as Uzbekistan opens up, given the relative size of the Uzbek market. Kazakhstan needs a response even though it is significantly ahead in terms of development,” he said.

Ahern admits he knew close to nothing about the Central Asian country before moving and it was quite challenging despite his extensive relocating experience in the past.

“In fact, I did not know much before moving to Kazakhstan in 2014. I was lucky to come to Kazakhstan once in 2011 for a large multinational corporation based in a fairly remote location. I saw something in three days, but not much. I also had some knowledge from a regular PwC tax leaders’ meetings for Central and Eastern Europe and in particular from one of the early leaders of the practice, Courtney Fowler, who lived in Almaty for 12 years. I had the impression of a country with big spaces and horses a long way from anywhere,” he said.

One of the reasons Ahern encountered difficulties was his age, he admitted.

“I was 16 years older than when I first became an expat and I wasn’t as flexible in my ways. The second thing is I never really worked in true post-Soviet countries. I saw an enormous difference between Poland and Commonwealth of Independent States (CIS) countries. Here, people seemed more hesitant to make decisions or step out of line and do something different. This is not good or bad, simply different,” he noted.

He didn’t hesitate, however, to quickly learn about his new surroundings.

“An enormous plus is that Kazakhstan is at a crossroad between Europe and Asia – I had never had Asian experience. So, one of the things I’ve enjoyed the most is an opportunity to look to and learn from the East,” he said.

“I really find Kazakhstan and its people very interesting. People are so friendly, genuinely want to help, have time for you, remember your name. People smile and despite the fact that I don’t speak Russian, they communicate with me and are always ready to help. Kazakh people are friendly, they engage, they are helpful, much more caring than in the western world, where people seem to be more in a rush, and are much focused on their own life and work. In Kazakhstan, people quickly remember you; they are very attentive, hospitable and respectful. You end up with the feeling that people care,” he added.

PwC global and operations in Kazakhstan

“We do very traditional tax consulting for many oil and gas companies, companies in the retail and consumer sector and companies providing services in both of those areas,” he said.

“Tax disputes and litigation are an important part of our practice. There is a positive trend in that while there are a lot of disputes, we see more of them being resolved in favour of taxpayers.  Transfer pricing is possibly the ‘hottest’ tax topic globally, and it’s no different here. There is a big focus on how companies in a group price the transactions between themselves. We do more and more outsourcing work – tax compliance, tax returns, accounting services and immigration support. This is for companies as well as individuals. Legal services are an increasingly important part of our practice, dealing with corporate matters, financing, employment and intellectual property. Legal is extremely complementary to our tax and advisory work,” he added.

Human resource consulting is crucial, too.

“Everything has a dimension related to people. We cover most matters related to people looking at recruitment, career paths, remuneration structures, job grading, leadership development and motivation. We provide this range of services consistently across Eurasia. So, our practice is comparable with a PwC practice anywhere in the world,” he said.

“Definitely, we are not changing our strategy, i.e. to build trust in society and solve important problems,” he added.

PwC to participate in EXPO 2017

“We are very supportive of EXPO and we are certainly going to participate in different events – meetings with trade delegations, national days, Astana Economic Forum, innovation summit, 30th plenary session of the Foreign Investors’ Council chaired by the President, etc.,” he said.

“We will bring leading colleagues to participate in different events during the EXPO. For instance, Michal Mazur, a partner of PwC’s drone consultancy who is one of 100 Europe changemakers according to the Financial Times 2016, and Rahul Gupta, an expert on smart cities and cybersecurity, will come to Astana in June. More generally, we are moving about the country, sharing our experiences over the last 20 years and encouraging investors in Kazakhstan,” he said.

“We wish EXPO 2017 great success and all guests and participants a most rewarding and enjoyable time in Astana. The new infrastructure, new airport, Congress Hall and exhibition centre, top brand hotels – all are good for the country for the long term,” he added.