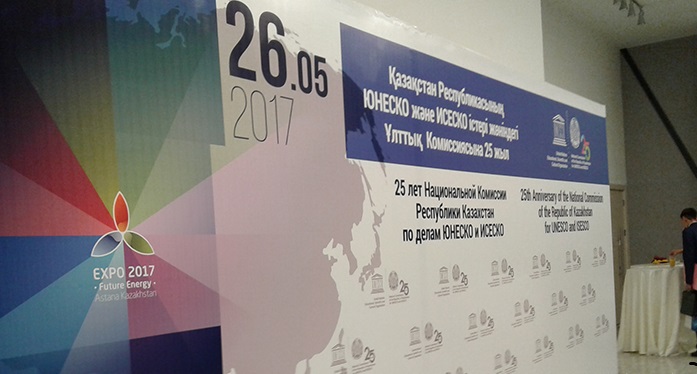 “Kazakhstan is happy to celebrate such a great event,” said Kazakh Minister of Culture and Sports and commission chairperson Arystanbek Mukhamediuly. “The head of state, Nursultan Nazarbayev, repeatedly spoke with great initiatives at UNESCO sessions that really lead to positive responses in the development of world civilisation.”

He also thanked those in Kazakhstan who contributed to developing relations with UNESCO.

“I would like to express my deep gratitude to the people who stood at the origins of the formation of the national commission. These are Olzhas Suleimenov and Murat Auezov. The present Ambassador of Kazakhstan to Russia Imangali Tasmagambetov also made a huge contribution to the promotion of the idea of UNESCO and he was the initiator of magnificent events, which we, Kazakhstan, happily held,” he added.

“In the past year, significant work was carried out regarding ISESCO. The main event in the framework of our cooperation was holding the Asian intergovernmental forum on science, technology and innovation in Astana in September, which was organised at the initiative of ISESCO with the support of the Mazhilis (lower house of parliament) of Kazakhstan. As a result of the forum, the Astana declaration on strengthening inter-parliamentary Islamic cooperation in the fields of science, technology and innovation was developed and adopted,” he said.

During the plenary part of the meeting, the national commission summed up the results of the last year, as well as set priority directions for 2017.

The 5,000-kilometre section of the Great Silk Road entered the UNESCO World Heritage List in 2014.

“Next in line is the Syr Darya section [of the Great Silk Road] and it has our legendary cities of Otyrar, Turkestan, Syganak and Sauran. It should be said that it took nine years for the nomination, research and preparation of the first section. We have already acquired experience and we have very good experts. We work closely with UNESCO. I think that the most important thing is the completion of the list of UNESCO. Since Kazakhstan is the ninth country in the world by its territory, we do not accidentally call it a huge open-air museum. Mangystau, Semey, Zhetysu, South Kazakhstan – all of them have outstanding monuments of cultural heritage,” said Doctor of Historical Sciences and Professor Karl Baipakov at the event, according to informburo.kz.